This article deals with the Greek god. For more meanings, see Hermes (disambiguation) .

Hermes ( ancient Greek Ἑρμῆς , also Ἑρμείας Hermeias , Doric Ἑρμᾶς Hermas ) is in Greek mythology the patron god of traffic, travelers, merchants and shepherds, on the other hand also the god of thieves, art dealers, rhetoric , gymnastics and thus also the palaestra and magic. As a messenger of the gods, he proclaims the decisions of Zeus and leads the souls of the deceased into Hades (underworld). He is one of the twelve great Olympian gods .

Etymology and other names

Usually the name is derived from the Greek word ἕρμα herma ("rock", "stone", "ballast"), which is said to refer to the stone pillars on the edge of Greek roads that were erected to mark holy places. But an origin from the language of the pre-Greek population of Arcadia , where the origin of his cult is assumed, is not excluded.

The Roman equivalent of Hermes is the god Mercurius , whose name refers to trade ( Latin merces "goods"). Hermes (similar to some other Greek gods) was also identified with the god Thoth in Egyptian mythology . As Hermes Trismegistos ( Ἑρμῆς Τρισμέγιστος ) Thoth / Hermes was considered a legendary author of numerous philosophical, astrological, magical and alchemistic writings, the Neoplatonists even traced the writings of Pythagoras and Plato back to this author. The god Anubis , who in Egyptian mythology led the souls of the dead into the afterlife, was also identified with Hermes. 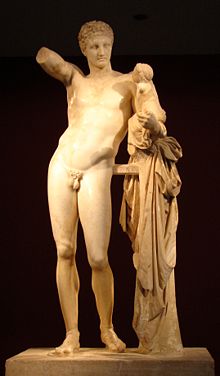 Hermes with Dionysus child, late classical depiction of the Praxiteles

Hermes is the son of Zeus and the Pleiade Maia , a daughter of Atlas . Most sources consider the place of birth to be Mount Kyllēnē in Arcadia, but the area around Mount Olympus is also mentioned. Even as a toddler, Hermes is described as devious and cunning:

“On the day he was born, he left his mother's cave and killed a turtle, which he used as a sound box and thus invented the lyre . On the same day he went to Pierien . On the way there, he stole 50 cattle from Apollo and covered his tracks by weaving a kind of snowshoes out of branches. He slaughtered two of the cattle and cut them up according to the sacrificial rite. Back at the Kyllene, he slipped back into his cradle. However, a winemaker had informed Apollon about the cattle thief. When he got to Maia the next day, Hermes acted stupid and argued that he was far too young to even know what a cow was. But Apollo brought Hermes before Zeus. Hermes defends himself with all kinds of lies and stole his brother's bow and quiver at the trial. Zeus decided that Hermes must return the cattle to Apollo. Then Hermes took out the turtle veil, sang a song to play on it and offered it to Apollo in exchange for the fifty cattle. The brother accepted and Hermes was again in possession of the cattle. Now he invented the syrinx . In order to receive this, too, Apollon gave his brother his golden shepherd's staff, which from then on was to mark Hermes as a herald's staff as messenger of the gods. But he wanted to be initiated into the art of prophecy in exchange for the syrinx, which Apollo granted him insofar as he instructed him in prophecy from lots. "

According to another version, Hermes received the herald's staff from Zeus, who made him his messenger.

From the Thrien , Hermes is said to have learned the art of prophecy from throwing pebbles into an urn. The game of dice and the prophecy from it are considered to be his own invention. Together with the Moiren, the development of the Greek alphabet was ascribed to him, as well as the invention of astronomy , the scale , the sports of boxing and gymnastics , weights and measures, and the culture of the olive tree .

Numerous nymphs like Karmentis, Sose, Tanagra were among his lovers, as well as the Arcadian Krokos or Amphion , the king of Thebes . As a mother of Hermes' son Pan were Dryope , Penelope , Persephone or the goat Amalthea called, others held Zeus or Kronos for his father. Together with Aphrodite , he was assigned the parentage of the hybrid Hermaphroditos .

As mortal sons of Hermes were Daphnis , the inventor of the shepherd's seal , which had emerged from the compound with a nymph with the mortal Antianeira conceived Argonauten Eurytos and Echion , Herold the Argonauten and participants in the Trojan War , further Hercules' favorite abderus and famous thief Autolykos , whom Chione bore him. 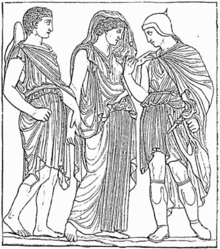 Hermes, Eurydice and Orpheus (relief in the Villa Albani , Rome) 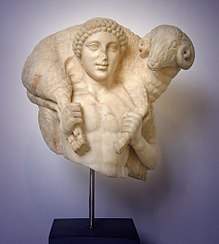 Like other ancient gods ( Mithras , Horus / Anubis ), Hermes was also a shepherd god . So he had both worldly and metaphysical tasks: As Zeus' messenger he was the ultimate lawgiver and highest worldly authority, as a psychopompos ("soul guide") he protected the souls of the deceased on their way to the judgment of the dead .

Shepherd deities were often portrayed as animal carriers , in the case of Hermes as kriophoros (ram carriers).

The shape of the shepherd god or animal carrier has two meanings:

Among the Greeks Hermes was the most youthful and beardless, with a wide-brimmed hat ( Petasos ), later a winged helmet , winged shoes or winged shoulders and the charming mighty golden Caduceus (Greek kerykeion , Latin caduceus ), respectively. With this Hermes can euthanize and bring about dreams; the staff is one of its attributes. Next to the staff, around which two serpents look at each other, he usually holds a purse in Roman depictions.

He is also sometimes depicted with a turtle or a ram. If the picture shows a bearded Hermes, the beard is pointed and curved forward. You can also see Hermes with a sickle , with a pipe and sword or as a shepherd with beef . The hat is also shown half black, half white, and sometimes it wears the shell of the turtle as a helmet on its head.

In Ovid's Metamorphoses , Philemon and Baucis take in Mercurius, who has risen to earth unrecognized .

In ancient philosophy , Hermes was identified with the Logos and interpreted as the human reason sent by the gods. 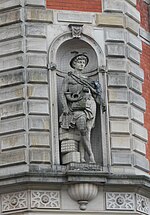 Hermes as a postman at the old post office in Flensburg

Due to its close connection to alchemy, Hermes is brought closer to the art of magic in many sources and also seen as the god of magicians, jugglers and thieves, just as a kind of "mischievous do-it-all" ( trickster ). Since his messages and arts are only of real benefit to those who really understand them, many people who get involved with Hermes end up being very ignorant.