In music, a scale or ( tone ) scale is a series of tones arranged according to the pitch , which is limited by frame tones , beyond which the tone series can usually be repeated.

In most cases a scale has the range of an octave and in many cases follows a heptatonic scale structure. How a scale is structured as a manifestation of tonality is determined in the tone system .

The most common European and other scales are based on five or seven tones within the octave, which pitches are called. Diatonic scales in major and minor or the church scales are widely used . Scales are defined by pitch intervals . The notes contained in the actual scale is known as diatonic tones.

In non-European music such as classical Arabic or Indian music there are tone systems and scales that divide the tone space differently, for example mugam , maqam or raga .

As an example, one of the most common scales in Central Europe today: the major scale. It consists of tones at a distance:

A scale defined in this way can be started on any note. By specifying a specific starting tone ( root note ), a key such as C major , D major , etc.

The ladder's own tones of C major are also called master tones and correspond to the white keys on a keyboard .

On a keyboard, the black keys are assigned “raised” or “lowered” ladder-specific tones. In the German-speaking world, they are called raised C sharp, D sharp, F sharp, G sharp and A sharp and lowered D flat, Eb, G flat, A flat and B. In other cultural areas the tones are referred to by other names . Today, in most cases, the equal tuning is used on keyboard instruments , so the semitones can be exchanged enharmonically . This means that on a keyboard there is only one key for C sharp and D flat, for D flat and E flat, etc. Thus each corresponds to the twelve ( with the publication of the Werckmeister tuning in 1691) (in non-European tone systems also more, mostly 20-24 ) possible tones within an octave of a certain frequency.

→ Main article : Frequencies of equal tuning
In the following, if not mentioned otherwise, it is assumed that the tuning is equal, since this is the most common tuning today. Tones can then be exchanged enharmonically.

It not only depicts the tone relationships of the harmonic-pure tuning (the tones a, e and h sound a syntonic comma lower than in the Pythagorean chain of fifths ), but also very vividly the chord stock of each major or minor scale, which is especially true for harmonic and melodic minor is very useful. In fact, our common major and minor scales are just as intended , as gebrachtem in an octave supply of tones of the main harmonies (here: F major (left), C Major (center), G major (right), ...). In addition to harmonies, in each case there next to see: Carl Dahlhaus “Investigations into the Origin of Harmonic Tonality” In addition, with this tonal network even functionally harmonious relationships can be clearly illustrated; see: Renate Imig: Systems of functional designation in harmony teachings since Hugo Riemann

The inner symmetry (here as-d) is immediately apparent, which is particularly helpful when displaying the modes with limited transposition options. This graphic can also be expanded to show twelve-tone rows or chords. However, in this version this is tied to a keynote. You can simply leave out the tone letters as long as you can see where the scale begins and where it ends. This representation assumes the temperature is equal , which is of course not historically correct for church modes. But instead of the semitone circle, you could also use the fifth spiral or similar. use. It looks like tones are skipped and no distinction is made between diatonic and chromatic semitone steps. However, this is the case in any representation based on the tempered scale.

Key assignments as a template 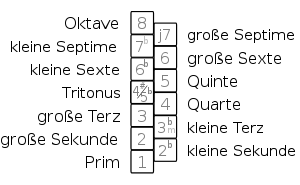 The following graphics depict various scales based on the not very common key assignment of 6-plus-6 instruments .

The scheme enables patterns to be remembered. The patterns are distance patterns, semitones , whole steps and three semitones can easily be recognized.