Diatonic (from ancient Greek διάτονος diátonos "going through whole tones", to διά "through" and τόνος "tension, tone"), a term mostly used adjectivally in music theory , characterizes certain tone relationships in tone systems and scales . Diatonic scales, for example, are special scales composed of whole and semitone steps, usually seven-step scales. Since the early Middle Ages, diatonic scales formed the basis of Western music, initially in the form of the church keys , later asMajor-minor system . At the turn of the 20th century, some of the composers abandoned the diatonic major-minor tonality.

The key series cdefgah corresponds to the white keys on the keyboard . They are the notes of the C major scale.

Most keys also require black keys, e.g. B. in F minor (above in the picture) the black keys for a flat, b flat, des, es. Below for comparison in C major.

Diatonic scales are mostly seven- step ( heptatonic ) scales that divide the octave space into five whole and two semitone steps. They differ from non-diatonic ladders by the following necessary features:

The “classical” diatonic scales ( major , minor and the church modes ) also meet the condition that they can be composed of two diatonic tetrachords (with the addition of an additional whole step). The tones of these scales can also be obtained by layering fifths (see below ).

As an extension of this original strict definition, scales that only meet the condition of dividing the octave into five whole tones and two semitones are sometimes called diatonic today. Examples of this are the acoustic and the altered scale .

In addition, according to today's understanding, scales that contain fewer than seven tones can also be viewed as diatonic, such as B. the anhemitonic-pentatonic ladders, which divide the octave space into three whole steps and two thirds .

The most famous and most important diatonic scales today are the major and the ( natural ) minor scales : with the following distribution of whole and semitone steps:

The diatonic scales in the narrower sense (“classical” diatonic scales) also include the church tones and the modal scales that are based on them today .

In a broader sense (see above under "Definition") these scales are also diatonic:

These scales are not diatonic or not fully diatonic:

Diatonic intervals are those that are contained in a diatonic scale. In detail these are: pure prime , fourth , fifth and octave , minor and major second , third , sixth and seventh . The tritone is also part of the diatonic ladder, but is determined as an excessive fourth, i.e. as a chromatic variant of the pure fourth, and is not counted among the diatonic intervals.

In contrast to chromatic (excessive or diminished) intervals, in tonal music diatonic intervals are considered to be immediately understandable. For the distinction between diatonic and chromatic intervals, it does not matter whether the concerned tone accidentals have or not. The only decisive factor is whether the interval in question is part of a diatonic scale or not.

The distinction between chromatic and diatonic intervals is only acoustically real when using pure tunings , whereas with today's common tuning - a compromise in intonation - the audible difference disappears. It then only exists in the notation, but is indispensable for understanding musical relationships in the major-minor tonality . 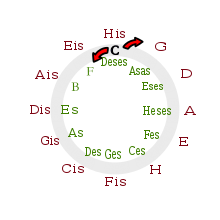 Circle of fifths , starting from C

The designation diatonic only represents a demarcation from chromatics; how the scales are constructed is not yet determined. These can be derived from a distance, harmonic or melodic. A more precise, narrow definition of the term depends on the perspective of the respective music theorist.

Hermann Grabner's (1886–1969) definition as well as the definition by Johann Georg Sulzer (1771) are much more detailed.

The tunings of the seven-step diatonic major scale are closely related to the derivation methods.

In the music of ancient Greece (probably because of the exclusive unanimity), the diatonic, the chromatic and the enharmonic appeared as tone genders. In Aristoxenos , diatonic scales are those in which two or three whole tones alternate between the two semitones. Some of the oldest sources on diatonic scales go back to Greek philosophers and mathematicians. See also:

The church modes , for example, Doric: DEFG ahc then comprised seven tones of an octave. Guido von Arezzo (around 1025) laid the foundation for this by introducing staves and solmization (see Guidonic hand ).

The diatonic scales expanded to twelve semitones per octave became more popular than others worldwide; so also in Egypt, India and China, while Arabic music with 24 intervals per octave , Indian with 66 or 22 micro-tones per octave and pentatonic Chinese can hardly be heard in the West.

Michael Schmidt-Salomon attributes this to internal musical reasons with an evolutionary-humanistic justification . The higher distribution is not the result of cultural imperialism , but a selection advantage of the Pythagorean scale, especially since the system was improved again in the 17th century with the well-tempered or equal mood . This makes it particularly suitable for creating new styles, while other systems can only be expanded to a limited extent.

"The division of the tone space into twelve sections is obviously just right: the brain could no longer easily categorize additional tones, and with less one could not build a differentiated harmonic system."

Other musicologists consider this simplification to 12 semitones to be a gross disregard for intonation .

"Regardless of how masterful today's musicians are, they no longer hear the bad major third of the equal tuning."

And the cellist Pablo Casals gives the advice:

“Don't be shocked if you have a different intonation than the piano. It's because of the piano, which is out of tune. The piano with its equal tuning is a compromise in terms of intonation. "

The term “diatonic” is also often applied to hand- pulled instruments that reproduce different tones when pulled and pushed. In this case, “alternating tones” would be more precise, since the alternating tones need not be diatonic.