Chromatik ( old Gr. Χρῶμα ( chrṓma) = 'color') describes in tonal music the "re-coloring" of diatonic pitches by increasing or decreasing (high or low alternation) by a semitone . The chromatic variants of f, for example, are f sharp and f sharp.

In contrast to the autonomous chromatics of the 20th century ( free tonality , atonality , dodecaphony ), in which all levels of the chromatic scale, regardless of their notation, appear as independent and equal elements of the tone system, the term is used in the traditional major-minor system Chromatik precedes the seven-step diatonic as a basic part of the tone system. Chromatic is therefore subordinate to diatonic as its extension.

Example of a sequence of diatonic and chromatic semitones with five different accidentals .
Diatonic steps can be recognized by the fact that there is a progression to the neighboring position in the system of lines, while the position remains the same for chromatic steps.

If a voice moves between two variants of the same tone (e.g. f-f sharp, f sharp-f, f-f sharp), one speaks of chromatic progressions as opposed to diatonic (ef or f sharp-g). Externally, the difference between a diatonic and a chromatic tone step can be recognized by the fact that in chromatic steps the names of the tones involved have the same, in diatonic steps, however, different initial letters. (The only exception: h -b is also a chromatic step.)

With pure intonation there is a difference between chromatic and diatonic progressions (see, for example, the sound example for the passage duriusculus ). This distinction is important for a full understanding of musical processes (especially with classical music). Only with equal tuning - a compromise in intonation - there is no difference between chromatic and diatonic progressions, since all semitone steps are the same.

The following types of chromatics are distinguished by WM Barskij and JN Cholopow:

In the standard work for classical harmony by Ludwig Thuille the following classifications can be found:

In the case of a chromatic progression with a given harmonic classification, the notation is clearly given.

Example 1 for a modulation in the minor parallel (chords here after "Blessed are you" EKG Württemberg No. 651 ) C-C sharp-D :

The C in the bass still belongs to the C major dominant chord of F major, the C sharp of the A major chord introduces the modulation to D minor, the minor parallel of F major.

Diatonic and chromatic pitches in the score

Even doubly raised or lowered tones need not necessarily be chromatic. For example, f sharp is the ladder's own, diatonic seventh degree of G sharp major. Such cases are by no means rare and occur already in the modulatory Schubert and even more frequently in the romantic harmony of Chopin, Liszt to Skriabin. Often the simpler spelling is chosen by means of enharmonic confusion , but this is not always correctly noted from a harmonic point of view. Thus, in theory, the ascending chromatic scale is realized with cross notation, while the descending chromatic makes use of Bes. In practice, however, this notation system does not necessarily apply. As such, there is no uniform understanding of how harmonic relationships are ultimately interpreted and correctly noted. Regardless of this, interval relationships can be interpreted differently.

The tritone is a special case . Although it occurs in the diatonic as an interval between the fourth and seventh degrees of the major scale, on the other hand it is assigned to the chromatic intervals as an excessive variant of the pure fourth.

A chromatic scale is obtained through an ascending and descending melodic sequence of twelve semitone steps within an octave. Based on the equal tuning , its interval structure is independent of the note with which it begins. So it has no keynote and represents a material scale from which so-called usage scales can be obtained by selection. It is only in free tonality or atonal twelve-tone music that it becomes a scale of use and takes the place of the diatonic major and minor scales.

The notation of the chromatic scale can be done according to different principles. Since around the middle of the 19th century, a notation that tries to get by with the smallest possible number of accidentals became increasingly popular. In addition, however, there has long been an endeavor in the practice of composition to clarify the embedding in tonal contexts through the notation.

Simplified notation of the chromatic scale

Notation of the chromatic scale in the major-minor system

On November 16, 1864, there was a report in the Allgemeine musical newspaper about Simon Sechter's harmony system, which made it clear that even then there was by no means a uniform understanding of how the chromatic scale should be notated. The following notation was largely standard for Bach and other classical musicians, with a number of exceptions, which are not explained here, are also important.

In practice, the spelling of all diatonic levels is retained and is not replaced by enharmonically confused levels.

In the ascending chromatic minor scale, all diatonic degrees are raised except the first. Instead of raising the first diatonic pitch, the second diatonic pitch is lowered. In contrast to this, however, some composers (e.g. Beethoven, Chopin) often write a raised first level instead of the lowered second level in ascending tone sequences. Example: Chromatic minor scale from A 'up

Tone assignment of a keyboard in a mid-tone tuning

Historical notation of the chromatic scale in a mid-tone tuning

Although the first well-tempered tunings appeared at the end of the 17th century , it was well into the 18th century before they were able to prevail against the previously common mean-tone tuning . Until then, the available tone supply and the corresponding notation was limited to what is shown in the adjacent illustration of a mid-tone keyboard. The tones of D flat, D flat, A flat and A sharp were not available at that time (or only as enharmonic variants that were unsatisfactory in terms of sound), so that certain keys could only be represented imprecisely. Correspondingly, Johann Mattheson described the basic triads of the relevant keys as follows in 1713: b major = b-e-flat-f sharp, f sharp major = f sharp-b-c sharp, g sharp minor = g sharp-b-flat, b minor = b-c sharp-f, g sharp major = g sharp-c-es, c sharp major = c sharp-f-g sharp, flat minor = eb-f sharp-b.

Applied to our grading system, the following applies:

The semitones in the bass are

If the use of natural intervals occurring in the overtone series is assumed, the whole tone must be divided into steps of different sizes. Is z. For example, if a chromatic intermediate step (f sharp) is inserted between f and g, the whole tone fg splits into a chromatic (f-f sharp) and a diatonic semitone (f sharp-g). The size of these semitones depends on the tuning system used.

The frequencies of the chromatic scale in different moods

In the following, the frequencies and frequency relationships of the tones of the chromatic scale are enumerated and compared to the pure tuning in equal tuning. The concert pitch a 'is assumed to be 440 Hz. 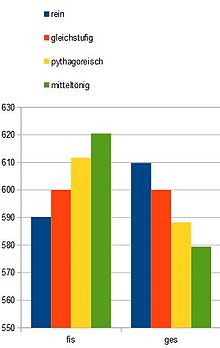 The Pythagorean tuning wins all tones, including the large whole tone, only by combining the first two intervals of the overtone series, octave and fifth, and only knows the large whole tone (frequency ratio 9: 8). This is divided into a chromatic semitone with a frequency ratio of 2187/2048 (corresponds to approx. 114  cents ) and a diatonic semitone with a frequency ratio of 256/243 (approx. 90 cents). The Pythagorean chromatic semitone is also called the apotome , the diatonic Limma . Since the chromatic semitone is greater than the diatonic in the Pythagorean tuning, f sharp is higher than g flat here, for example . The theory that was widespread in the 20th century is based on this intonation that the leading tone (for example F sharp) should actually be intoned higher than in the equal pitch.

Both variants of the chromatic semitones in pure tuning are smaller than the diatonic semitone, so that now, for example, f sharp is lower than g flat . In the context of historical performance practice and based on the consideration that the consonance heard d-f sharp is based on the pure major third, this variant is preferred in tonal music today on instruments with flexible intonation.

So-called well-tempered tunings such as the Werckmeister tuning or the Kirnberger tuning lie in the intonation between the equal and mid-tone tuning.