The pure tuning of keyboard instruments is afflicted with the problem of the so-called Pythagorean comma, ie that with 12 tones per octave, pure fifths and pure octaves are mutually exclusive and therefore only a limited number of perceived chords are available. Equal tuning solves this problem by distributing the inevitable comma (music) evenly across all pitches so that all intervals except the octave are equal and slightly impure. In earlier tuning systems this was not the case, which limited the possibility of modulation to other keys. Critics of the equal temperament, however, regret that it loses the individual character of individual keys of the earlier medium-tone or well-tempered tunings.

In the practical implementation of equal tuning, especially with stringed pianos, it should be noted that, due to the inharmonicity of the piano strings, an additional stretching of the octaves is necessary.

Musical instruments in which an intonation of pure octaves, fifths, fourths, thirds etc. is not possible in all keys, are predominantly tuned equally in western music - a compromise in intonation. This is particularly important for musical instruments in which the pitch and number of keys or the number of tones per octave are determined by constructive parameters, e.g. B. keyboard instruments such as organ, harpsichord, piano, or stick games and plucked instruments with multiple strings , and therefore a key-related retuning or adjustment of the pitch is not possible during the game.

Depending on the harmonic context in which a note is played, it should actually have a slightly different pitch in order to sound pure ( beat-free ) in a chord . For example, the G sharp note does not correspond to the A flat note, and this problem ultimately exists with all tones of a scale, depending on the harmonic context in which they are used. Tempering was therefore required for keyboard instruments , which was first implemented in the medium-tone tunings and then in the well-tempered tunings. It is characteristic of all these temperaments that they were developed on the basis of musical considerations. The exact position of all twelve semitones is determined in a medium-tone or well-tempered tuning in such a way that some keys or chords sound cleaner, others, mostly the less common ones, sound more impure.

Other instruments, such as string or wind instruments , on the other hand, can definitely intone purely, whereby the player can then compensate for the system-related impurities by slightly adjusting the pitch.

When these purely playable instruments play together with the piano, intonation conflicts can arise. The cellist Pablo Casals wrote :

“Don't be shocked if you have a different intonation than the piano. It's because of the piano, which is out of tune. The piano with its equal tuning is a compromise in terms of intonation. "

- The Way They Play

In the equally tempered tuning, the octave is divided into twelve identical semitone steps:

This compensates for the Pythagorean comma that exists between the twelfth perfect fifth above a tone, for example CGDAEH-F sharp-C sharp-G sharp-Dis-A sharp-Eis-His, compared to its seventh octave. These fifths are now all tuned 1/12 of this comma lower, so that the open spiral of fifths closes to form a circle of fifths . Compared to the Pythagorean (perfect fifth) tuning with the perfect fifth of 702 cents, the equal tuning has a slightly reduced fifth of 700 cents; accordingly, the fourth of the equal tuning (500 cents) - which complements the fifth to the octave - is about 2 cents further than a pure fourth (498 cents). The major third of the pure tuning (386 cents) is increased ("sharpened") by around 14 cents in the equal tuning (400 cents), while the minor sixth (pure: 814 cents, equal: 800 cents) is reduced by the same value becomes. The minor third (pure: 316 cents, equal: 300 cents), on the other hand, is tuned too narrow by around 16 cents, while the major sixth (pure: 884 cents, equal: 900 cents) is tuned too far by the same value.

On an equally tuned instrument, apart from the octave, not a single interval is “ideal”, i.e. H. in a simple integer frequency ratio purely voted, and the variations are quite audible. In today's music perception , however, this is generally perceived as acceptable (habituation effect). 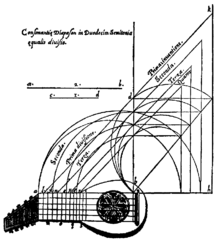 The equal temperament tuning was the first time in 1584 by Chu Tsai-yu nine-digit numbers are fairly accurately calculated (朱載堉) in China with the help of a system. In Europe, however, these calculations only became known in 1799, without Chu Tsai-yü being named. In 1588 Gioseffo Zarlino offered an exact geometric representation. Simon Stevin was the first European to describe the Singconst in Vande Spiegheling (manuscript around or before 1600), using a method he had developed for calculating the roots, but he wrongly believed that natural major thirds were guaranteed.

As practiced by Vincenzo Galilei , lute tunings of the sixteenth century, designated as equal, were mostly based on the semitone with the ratio 18:17 (around 99  cents ).

In the 17th century in particular, the equal mood was not only used by theorists such as B. Pietro Mengoli and Marin Mersenne , but also discussed by composers, instrument makers and performing musicians. This is evidenced, for example, by a dispute about moods between Giovanni Artusi and Claudio Monteverdi shortly after 1600. The music theorist Giovanni Battista Doni (c. 1593 - 1647) alleged anecdotally in a letter that Girolamo Frescobaldi had the same temperature for the organ in the Basilica S. Recommended Lorenzo in Damaso. But there is no evidence of Frescobaldi's support for equality, and it would have been unprecedented in organ building of his time.

In German-speaking countries was used for equally- the concept of equal temperament , so Andreas Werckmeister in 1707 in his posthumously published Musical Paradoxal-Discourse . There Werckmeister suggests distributing the Pythagorean comma evenly over all twelve fifths. He also calls this mood "well tempered" and justifies it with mystical or religious arguments:

“We go on / and know / when the temperature is set up / that all fifths 1/12 commat: the tert: maj: 2/3 the min: 3/4 comm. float, and an accurate ear can also bring it to a standstill / and know how to tune it / so then certainly a well-tempered harmony through which the whole circle and all clavis will be found. Which then can be a role model / how all pious / and well-tempered people will live and celebrate with God in everlasting equal / and eternal harmony "

The practical significance, however, initially remained minor. But there were increasing supporters of the equal mood. B. Johann Georg Neidhardt , Friedrich Wilhelm Marpurg and Jean-Philippe Rameau belonged. In 1749 Georg Andreas Sorge wrote Detailed and Clear Instructions on Rational Calculation , in which he dealt with the mathematical questions of equal mood, which he called “rational equal temperature”. Towards the end of the 18th century, equal moods gained the upper hand over unequal moods ; in the 19th century it finally prevailed.

With this, however, the key characters lost their importance for new compositions , because different keys no longer sounded different in this respect. When performing older works on equally tuned instruments, essential artistic aspects of the composition are often lost for the same reason. For example, older composers of their time often used bad-sounding "impossible" keys to make negative facts such as pain or sin tangible.

Today instruments with fixed pitches, such as the piano or the guitar , are tuned equally by default. Many organs and harpsichords, however, are historicized with different, unequal tunings .

Relationship between frequency, semitone and octave with logarithmic representation

where f 0 is the frequency of any output tone (e.g. the frequency of the concert pitch a 'at 440 Hz). i is the semitone step distance to the selected tone with frequency f 0 . Such a mathematical sequence is called a geometric sequence . If you want to plot the frequencies over equidistant pitch names on a straight line, you have to use simple logarithmic paper . It makes sense to use the logarithm of two rather than the tens for labeling.

For example, if you want to determine the frequency of the tone g ', you count the semitone step distance from the concert pitch a' ( i = minus 2, because you count down) and insert the values ​​into the equation:

As you can see, g '' has twice the frequency of g '. The octave purity is thus preserved, whereas all other intervals are slightly impure.

When comparing intervals, the unit of cents is used . The following applies: 1 octave = 1200 cents.

Comparison of the frequencies of equal tuning and pure tuning.

The division of the octave into twelve tones with the same frequency ratio to their neighboring tones is the most common in Western systems today, but not the only way to approach pure intervals . Better approximations can be achieved with more notes per octave. Equal classifications that have actually been used are e.g. B .:

In the new music of the 20th and 21st centuries experimented with numerous equal (and other) tone systems, with the octave being divided into approximately 17, 19, 31, 53, 72 equal steps.

Occasionally, intervals other than the octave are also divided. So z. B. Karlheinz Stockhausen for his electronic study II from 1952 a sound system based on the division of an interval with the frequency ratio 5/1 into 25 equal steps. Since the distance between the steps is slightly larger than the traditional tempered semitone , a tone system is created that is suitable for creating (inharmonic) tone mixtures .