Andreas Werckmeister (born November 30, 1645 in Benneckenstein , † October 26, 1706 in Halberstadt ) was a German musician and music theorist of the Baroque period . 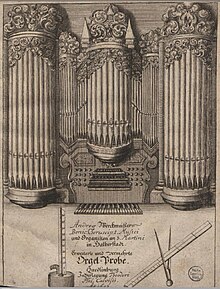 Werckmeister attended school in Nordhausen and Quedlinburg . He received his musical training from his uncles Heinrich Christian Werckmeister and Heinrich Victor Werckmeister . In 1664 he became organist in Hasselfelde , in 1674 organist and town clerk in Elbingerode (Harz) . In 1675 he was appointed court organist at the court and collegiate church of St. Servatius in Quedlinburg. In 1696 he became the organist of the Martinikirche in Halberstadt .

Only one booklet of his compositions has survived: Violin pieces with figured bass under the title Musikalische Privatlust (1689).

Werckmeister is better known to posterity as a music theorist , especially with his writings Musicae mathematicae hodegus curiosus ... (1687) and Musikalische Temperatur, or ... (1691), as well as the posthumously published work Musicalische Paradoxal-Discourse (1707), in which he follows the has described well-tempered moods named for him (see Werckmeister mood ).

The film Die Werckmeister's Harmonies refers to his music theory.

Werckmeister's idea of ​​the basic skills of a piano player

The term “piano” at that time was more comprehensive than the current one, because it meant every instrument with a keyboard, especially the organ and harpsichord. The ability mastered by the virtuoso of the piano was that he knew "how the claves sound together". That is why the good piano player is characterized by the fact that he “has the nature of the piano”. The separation between the composer and the interpreter that is common today was also alien to musical thinking at the time of Werckmeister. The piano player's ability to master “clavier and composition”, which he valued, was identical to the technical ability of improvisation (ex-tempore play). Even when transposing you can see “whether an organist has his piano in his head”. Anyone who plays sheet music (“tablatures”) by other composers exposes himself to the suspicion of being a fraud. The audience is thereby “led behind the light”, as the alleged connoisseur of “clavier and composition” only reenacts the musical thoughts of others - as a kind of plagiarism. That is why it is necessary to “be a little careful / and not want to believe every boastor immediately: because many imagine / they already know everything”. Those who cannot improvise always “get stuck with the tablature / muddle something like that / and get stuck.” Werckmeister's treatise 'Cribrum musicum' (pp. 42–60) had Chapter 52 from the Musical Quack Salber quoted by Johann Kuhnau (1660–1722) to confirm his idea of ​​the true virtuoso. Kuhnau defined the "true virtuoso" as an artist who is able to play an "ex tempore composed full-part sinfonia or sounata". A musical quack salver, on the other hand, is a musician who has no improvisational skills.

Music theory based on Pythagorean-Platonic philosophy and natural theology

Along with Lorenz Christoph Mizler, Werckmeister is one of the last representatives of a connection between philosophy, music theory and theology that goes back to antiquity . The idea of ​​a theology based on music , which complements the revelation in the Holy Scriptures within the framework of a natural theology and would make sense especially for the “godless”, was expressed by Andreas Werckmeister in the late publication Musicalische Paradoxal-Discourse . In the preliminary report on the work published posthumously in 1707 by his heirs, he referred his readers to the "Musicam in numeris theologizenticam, or Musicam Theologicam". Finally, in addition to the revelation in the Holy Scriptures , God also reveals himself in the light of nature. Werckmeister had formulated his thoughts in the chapter “The secret interpretation of numbers” in the above-mentioned publication: “These numbers 1. 2. 3. 4. 5. 6. and 8. are now a corpus of complete harmony [...]. They can represent us shadow-wise the essence of Almighty God / as he was from eternity in his eternal nature / before the foundation of the world was / was. "Knowledge of God is therefore shadowy from the beginning of creation through the insight into oneself the harmony revealing music was possible.