Lorenz Christoph Mizler [de Kolof] (born July 26, 1711 in Heidenheim , Middle Franconia ; † May 8, 1778 in Warsaw ) was a German philosophical scholar, writer, physician, printer, bookseller, music theorist , and musicologist . The Doctor of Philosophy and Medicine was of particular importance for the Polish Enlightenment and for Bach research.

Mizler dealt early on with ancient authors, the problems of contemporary philosophy and theology, but also with questions of music. Attending school in Ansbach was supplemented by private lessons at home. Georg Heinrich Bümler , the band master of the Margrave of Brandenburg-Ansbach and Johann Samuel Ehrmann , choir director of Ansbach, were honored as dedicators in Mizler's dissertation (1734) along with the theorist Johann Mattheson and the practitioner Johann Sebastian Bach . Mizler emphasized in his dedication text that he had learned the basics of music from his dear and best friend Johann Samuel Ehrmann. Johann Matthias Gesner , who became rector of the Thomasschule in Leipzig in 1731 , ensured with his excellent letter of recommendation that his former Ansbach student in his new home in Saxony could continue his music lessons with Johann Sebastian Bach. 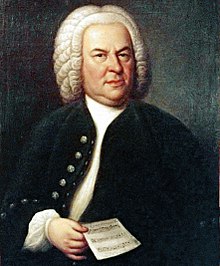 The 26-year-old Mizler was shown great respect in Leipzig's cultural life. In 1737 , the philosophy professor and influential scholar Carl Günther Ludovici , who worked here, gave him a far greater importance within music than the virtuoso Johann Sebastian Bach. As a result, Mizler's life and work were presented much more extensively than that of his teacher in the Universal Lexicon , which was edited by Ludovici from 1739 . The reasons for this peculiar preference lie in the high value placed on Wolff's philosophy , which musicology has so far mostly ignored when looking at Leipzig's intellectual life. Mizler had revealed himself to be a passionate Wolffian at an early stage and therefore took this prominent position with the leading scouts in the Leipzig area.

Christian Wolff's philosophy was already controversially discussed in Ansbach, and Mizler saw no compromise between the so-called Wolffians and the anti-Wolffians in his passionate search for truth . The main point of contention was the relationship between philosophy and theology. The freedom of research and teaching propagated by Wolff enabled a fundamentally critical attitude towards theological statements, which Wolff derived from the primacy of philosophy over theology. Lutheran Orthodox and Pietist theologians were outraged by the demand for a change in this old hierarchy and, moreover, assumed that Wolff had an anti-Christian or - in view of his enthusiasm for Chinese culture - even atheistic stance. As a Bach student in the 1730s, the academic Mizler had a completely different level of knowledge than the non-academic Bach. All of this must have initially had an irritating effect on Bach, who lives in a conservative environment. In his dissertation in 1734, Mizler had already demanded that a "perfect musician" not only have to be well versed in all parts of philosophy, but above all also be a trained mathematician. In keeping with the zeitgeist of the time, Mizler wrote that competence was demonstrated by the fact that the real connoisseur could explain the rules of his art in a scientific manner. However, Mizler admitted that it was very difficult to find such a thing in music. It is possible that because of such demands, which are typical of Wolffians, there was even a temporary distance between the practitioner Bach and the theoretician Mizler.

The relationship between Bach and Mizler became more intense in the 1740s, because the composer received his former pupil like a good friend in 1747 and gave him insights into his scores. Through important publications, Mizler had meanwhile become a respected music theorist in the music world, an interesting and competent conversation partner for Bach. This put another positive sign and entered upon completion of approximately one year of formalities in 1747, founded by Mizler and the philosophy of Wolff oriented Correspondierenden Society of musica metallic Sciences in which he could have distance without trouble. This public accession of Bach to the law firm of the passionate Wolffian Mizler makes people sit up and take notice. The sources, which have now been carefully researched, allow a new perspective on the last decade of the composer's life. Mizler, for his part, assessed the relationship positively several times and spoke of Bach as his good friend and patron. The well-known Bach portrait of Elias Gottlob Haußmann was made in 1746 in accordance with the statutes as part of the preparations for Bach's entry into the law firm and shows the relevance of Mizler as well as the first extensive Bach biography he published. The importance of Mizler for the last decade of Bach's life has been assessed differently by Bach researchers - mostly always on the basis of fragmentary findings about Mizler.

A cursory glance at Mizler's musicological writings might suggest that he considered this art to be rationally comprehensible in all its details. This impression of rigorous rationalism could be reinforced by the mathematical and systematic aspects of music theory that he emphasized many times over. Undoubtedly, the scholar tried to research as many areas as possible in a strictly scientific manner. On closer inspection, however, differentiations emerge, because Mizler certainly saw the secrets of composing, which are closed to rational penetration. Some utterances from the 1730s were characterized by youthful zeal or frivolous and ambiguous. Mizler later relativized the statements published in arrogance and spoke of areas in music that cannot be rationally grasped. On the other hand, he wanted to systematize the manageable topics of music theory in his book The Beginnings of the Thorough Bass according to the strict principles of mathematical teaching . Even his contemporaries had misunderstood Mizler's “figured bass machine ” because it was only intended to demonstrate the rationally representable teaching concept of general music theory, including the sentence model of the so-called octave rule .

From the middle of the 1730s, Mizler began activities to promote music at various levels: He published the 2250-page specialist journal Musikalische Bibliothek. First, 15 individual editions appeared, which were then combined into four volumes. The different topics of the total of 111 magazine articles represent an important musicological source. In 1738 Mizler founded the Corresponding Society of Musical Sciences , which exchanged information as a virtual community only by circular. Among the co-founders were Giacomo de Lucchesini († 1739) and Georg Heinrich Bümler (1669–1745). Well-known composers such as Handel , Telemann , Stölzel , Graun and Bach became members of this society, which existed until at least 1761. The hoped-for efficiency of the association, however, remained far below Mizler's expectations despite the intensive exchange. Internal disputes within the firm, in particular about the special theories on the sound system introduced by Telemann, weakened the cohesion of the members, so that the firm's importance declined over time, especially as it still had to deal with financial problems. To make matters worse, Mizler had already moved to Końskie in southern Poland in 1743 and, after moving to Warsaw in 1749, increasingly shifted his interest to other areas.

In addition to his work for the society, Mizler devoted himself to fundamental work on music theory. He published a thorough bass lesson in which he systematically presented the principles of contemporary music theory. The important textbook on counterpoint by Johann Joseph Fux Gradus ad Parnassum (Latin original 1725), which was considered the standard work for subsequent composers up to Paul Hindemith, was published in Mizler's German translation in 1742.

As a composer, Mizler is only of marginal importance. His much-discussed ode compositions were often misused to discredit his controversial ideals. These small composition works are only to be understood as application examples and exercises for Mizler's music theory.

In the second half of his life, Mizler was appointed Royal Polish Councilor and Court Medic and appeared both as a doctor of philosophy and medicine. In Poland he initially devoted himself intensively to the medical profession. But his wish to influence literary life became more and more important. One of his pioneering acts was the establishment of a printing company in Warsaw that was not formally dependent on the clergy. He started operations here in 1756 and produced around 150 fonts. He worked as an author, bookseller, printer, librarian, editor of magazines and Polish literature. In particular, as a historiographer of the Kingdom of Poland, he published extensive folios with a total of over 4000 pages. Furthermore, the Polish-language edition of Johann Christoph Gottsched's First Reasons of All World Wisdom should be emphasized. The magazine Monitor , which was largely editorially designed by him , was produced in his print shop between 1765 and 1777 with a volume of more than 10,000 pages. Both Gottsched's work and the monitor were important for the development of the Polish Enlightenment. Mizler could rightly call himself one of the first "apostles of Wolffian philosophy". For his services, Mizler was awarded the title of nobility "de Kolof" by the Polish government and the special Merentibus Medal of Honor from King Stanislaus II. August Poniatowski .

It would be misleading to put Mizler as a musician on a par with other Bach students. Rather, the young scholar referred to himself as a philosopher. His musicological lectures, which he combined with philosophical and theological topics at the Philosophical Faculty of Leipzig University, are considered a pioneering achievement within the university musicology, which was not yet established at the time. His lecture concept shows his endeavors - already indicated in other places - to link natural theology with Wolff's philosophy and a theological-philosophical understanding of music in the sense of a music theology . Mizler did not stand out as an independent philosophical author, because, like many contemporary scholars before Kant , he lived in the hope that Wolff's demonstrative method would provide a perfect system for solving the most varied of problems. Now all that matters is that Wolff's “apostles” spread the truth of this philosophy and apply it in practice for the benefit of society. Truth was understood as a scientific statement that could withstand rigorous logical testing. Mizler's teacher Johann Christoph Gottsched defined philosophy (world wisdom) as "a science of bliss". Even in the last years of his life, Mizler emphasized the importance of the sciences and arts, "which all contribute to true temporal happiness". Since Mizler saw himself primarily as a philosopher in this sense, it is not surprising that he repeatedly pointed out with great emphasis that music was only his sideline. But this philosophy finds its concrete application in music.

In his endeavors to reintegrate the ancient music philosophy into encyclopedic-university thinking, Mizler walked a tightrope. Pythagorean thinking was unequivocally discredited in connection with the discussions about Sigmund Ferdinand Weißmüller among leading Leipzig scholars such as Carl Günther Ludovici . That may also be the reason why Mizler was preferred to be seen in Poland and not as a lecturer at Leipzig University . Mizler had set out his lecture concept in 1742, a year before he left for Poland. It was disputed whether music , which traditionally belongs to the philosophical encyclopedia within the framework of the artes liberales , should still be regarded as a philosophical science in the 18th century. Mizler had already clearly affirmed this question in his dissertation in 1734 and even more clearly in the second edition in 1736 and had to endure Ludovici's criticism, but Mizler nevertheless accepted him into the illustrious circle of Wolffians. Mizler showed his interest in contemporary mathematics in a review of Euler's music treatise Tentamen novae theoriae musicae (1739). Mizler could easily keep up with the level of Euler's mathematical musical thinking. Wolff praised Mizler's musical competence several times. The philosopher was particularly pleased that his opponent Euler had been unmasked by Mizler in his musical incompetence. Gottsched also spoke with exuberant praise of his former student. Mizler thus enjoyed an excellent reputation among the influential Wolffians as a scholar with a focus on music theory.