Seven Arts is a forwarding to this article. For the memorial, see The Seven Arts .

The seven liberal arts (Latin septem artes liberales , more rarely also studia liberalia ) are a canon of seven subjects that arose in antiquity . The liberal arts traditionally consisted of education befitting a free man, but their number of seven is only attested in late antiquity . In medieval teaching, they were regarded as preparation for the faculties of theology , law and medicine .

The liberal arts were named in order to evaluate them as being of higher rank than the practical arts ( Artes mechanicae ). Seneca writes in his 88th letter: Quare liberalia studia dicta sint vides: quia homine libero digna sunt (“You see why the liberal arts are so called: because they are worthy of a free person”). A free man was someone who did not have to work to earn a living. Thus only those jobs that had no connection with gainful employment could be worthy. In the liberal arts, a distinction was made between the trivium (three-way) of linguistic and logical-argumentative subjects, which are the prerequisite for any occupation with (Latin) science, and the advanced quadrivium (four-way) of mathematical subjects. 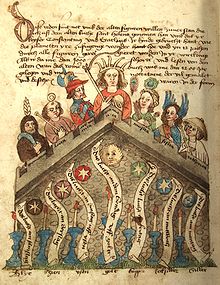 The seven liberal arts with the symbolic figures of the planets

The Roman writer Martianus Capella , who lived in the 5th century , wrote De nuptiis Philologiae et Mercurii , which was to serve as a textbook for the seven arts. In this tradition, the seven arts were personified in the form of female allegories and often represented with the following attributes:

A special position was held in the 8th / 9th Century published, among others by Alkuin and Hrabanus Maurus to the "Physica" expanded division of the quadrivium into the seven arts arithmetic, geometry, music, astronomy, astrology, mechanics and medicine.

There is a memory verse in hexameters for the individual disciplines :

The Greek tradition did not yet form a canon of the liberal arts. The four mathematical subjects, however, were already mentioned by Plato in the Politeia in connection with the training of the ideal statesman next to philosophy as those subjects which lead to the knowledge of reason, whereby Plato already refers to the Pythagoreans . Aristotle distinguishes three ways of life worthy of a free man ( βίοι bíoi ), all of which take place in the realm of the beautiful : (a) in the enjoyment and consumption of the physically beautiful; (b) in performing beautiful deeds within the polis ( βίος πολιτικός bíos politikós ); (c) in exploring and looking at aesthetic things ( βίος θεωρητικός bíos theoretikós ). Even the bíos theoretikós had a political background, as it was the “polis” that was effective and decisive here. “Theoros” was the name of the representative sent by Greek cities to the public festivals.

The liberal arts ( artes liberales ), stemming from the enkyklios paideia of the sophists, were first treated encyclopaedically in the Disciplinae of the Roman scholar Varro in the 1st century BC. In the case of Varro, like Cicero and Vitruvius, the number seven does not appear, but rather in the 8th and 9th books he also deals with medicine and architecture.

Mathematical and natural science subjects were not taught in the Hellenistic grammar schools, and they were not part of the curriculum in the urban teaching system of the Roman Empire . Extra-occupational instruction in these subjects was only offered in philosophy schools and was therefore only accessible to a small percentage of the population. The liberal arts are only attested to as a fixed canon of seven subjects in late antiquity (with Augustine and Martianus Capella ). For these authors, the purpose of acquiring knowledge in the seven subjects was not general education; rather, the aim was a philosophical or religious preparation of the soul for the ascent into the intelligible world according to the doctrine of Neoplatonism or into the realm of divine things in the Christian sense. Martianus Capella expressly emphasizes that medicine and architecture are not part of the canon. Isidore of Seville also explains in his etymologies that medicine does not belong to the liberal arts, since as secunda philosphia it requires the doctor to study it.

The seven liberal arts were conveyed to the Middle Ages in encyclopedic form primarily by Martianus Capella, in whose didactic poem From the Marriage of Mercury and Philology these arts appear as bridesmaids and spread their teaching knowledge as wedding gifts, as well as by Cassiodorus and by Isidore's incorporation of the subject matter into his Etymologiae . In addition, there were the Ars minor and Ars maior des Donatus in individual subjects as basic textbooks for grammar, the Rhetorica ad Herennium (incorrectly) ascribed to Cicero for rhetoric , the two institutions of Boëthius for arithmetic and music and for dialectics its translations and commentaries on writings from the Aristotelian Organon.

The teaching in the Artes Liberales stood as a propaedeutic between elementary teaching (reading and writing with elementary knowledge of Latin, arithmetic, singing) and the actual scientific studies, in which theology had the first rank in the early Middle Ages. The material of the Artes or parts of it initially conveyed the monastery, cathedral and cathedral schools as well as municipal educational institutions and free masters. With the emergence of the universities , the Artistic Faculty (Facultas Artium) was integrated into the Studium Generale as one of the four faculties (together with theology, law, medicine) and thus became the forerunner of the Philosophical Faculty, under whose name it has been in part since the 15th Century was continued.

Already in the teaching of the scholastic artist faculties, the subject matter of the Artes Liberales changed considerably and, against the background of new translations of the writings of Aristotle and his Arabic commentators, mainly took up philosophical content. Rhetoric and music faded into the background, as are grammar, unless as part of the study of the modes significandi was continued as a kind of linguistic logic, gained during the dialectics of meaning and science in the broadest sense Artes to study in theoretical (physics, Metaphysics) and practical (ethics, economics, politics) philosophy were expanded.

Studying at the artist faculty remained a prerequisite for studying at the other three faculties. As an academic degree , the Artistic Faculty awarded the title of Baccalaureus Artium after an interim examination and - if the Baccalaureus did not begin his actual studies at one of the other faculties - the completion of the Magister artium after another examination . The license to teach (licentia docendi) in the Artes Liberales could, with some restrictions, be acquired as part of the bachelor's degree, but the full teaching qualification was only available with the Magister artium, in its place since the 15th century, as part of the general replacement of the Magister by the doctor who entered the title of Doctor philosophiae .

Under the central concept of the Studia humanitatis , which was not linked to a certain ancient canon of subjects, but to the formulation of general classical educational goals in Cicero, the Artes underwent a re-evaluation in humanism of the 15th and 16th centuries, which was not only related to the Artes study of the university, but also concerned pre-university and non-university educational efforts in schools and private lessons. On the one hand, the subjects of the trivium came to the fore through the study of a partly new canon of classical, now if possible also Greek model authors with a focus on the field of poetry, on the other hand practical versus theoretical philosophy in philosophy, and also the study of history posed. Physical exercise ( exercitia ), horse riding , fencing and dancing were considered artes illiberales .

Liberal Arts in the USA

see discussion: Seven Liberal Arts in the US

In American higher education, liberal arts are courses of study that are intended to provide general education and the development of basic intellectual abilities and expressiveness. They thus delimit themselves programmatically from the vocational or scientifically specialized training or are in front of it. The liberal arts studies are among the undergraduate studies and be on their own, mostly private liberal arts colleges studied. Colleges of this type often place particular emphasis on individual student support, small class sizes and team-oriented learning. Curricula vary, but typically cover a wide range of subjects from the fields of math and science, social science, literature and language, and creative writing , art and music. The course usually lasts four years and can be completed with a bachelor's degree, which can then be continued at a professional school or graduate school with a second degree in a more specialized subject such as law, medicine or business administration. A few liberal arts colleges also offer their own graduate studies .

Since the end of the Second World War , the mission of the liberal arts colleges , which is specifically geared towards general education - due to the training needs of returning war veterans and the increasing technical and information technology specialization of the world of work - has repeatedly been the pressure to adapt to a more practical professional demand and to the needs of each current job market-oriented training exposed. According to a 1998 study, only 3% of all college graduates in the USA had obtained a degree from a liberal arts college , but then a disproportionate share of economic and political executives in the further training and professional life (8% of the Forbes list , 19% of US presidents), Pulitzer Prize winners (between 6% and 23%), Fulbright Scholars (9%), and post-graduate degrees.

Liberal Arts outside of the US

The liberal arts college is a specifically US-American institution that does not appear in the British education system and other countries, or only as an imitation or offshoot of the US model.

In Germany there are only two programs with a similar format at public universities. Further liberal arts courses or programs oriented towards them can be found at several private universities.

There are now eight Liberal Arts Colleges, so-called University Colleges, in the Netherlands.

In China, the Boya College (chin. Bóyā xuéyuàn博雅 学院) at the Sun Yat-sen University (Guangdong) is an attempt to establish a variant of the Liberal Arts based on a synthesis of "West" and "East" based.