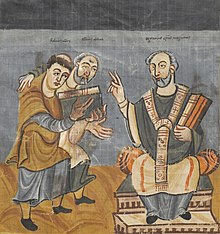 The young Hrabanus Maurus (left), supported by his teacher Alkuin , the abbot of St. Martin's monastery in Tours (center), presents his work De to Saint Martin , Archbishop of Tours, later incorrectly referred to as the Archbishop of Mainz Otgar laudibus sanctae crucis . Representation in a manuscript from Fulda around 830/40 (Vienna, ÖNB cod. 652, fol.2v)

Hrabanus Maurus (also: Rabanus or Rhabanus ; * around 780 in Mainz ; † February 4, 856 in Winkel im Rheingau) was a monk and abbot of the Fulda monastery , priest and Archbishop of Mainz, polymath , teacher and author . As a scholar, abbot and archbishop he was one of the most important figures in the period of upheaval of the 9th century, known as the Carolingian Renaissance , and was closely related to Emperor Lothar I and his wife Irmingard von Tours .

Hrabanus was born around 780, after Eckhard Freise only "around 783", as the son of noble parents in Mainz . As a child , aged no more than eight, he was handed over by his parents as puer oblatus to the custody of the Fulda monastery and from 788 he attended the school of the then flourishing, but not yet at the peak of his later won under his own direction for religious and scientific education Fame of the Benedictine monastery in Fulda .

After completing his training, he was able to shine as a scholar at the court of Charlemagne . Here he was promoted by Alkuin , the head of the imperial court school in Aachen . Alcuin called him "Maurus", as the founder of the order Benedict called his favorite pupil. When Alkuin went to the canons of Saint-Martin de Tours , Hrabanus followed him to study the Bible, liturgy and law.

In 801 he received the ordination of the diaconate and before Alcuin's death in 804 he was a teacher at the monastery school of his home monastery in Fulda, later (probably 818) he became its director. In 814 he was ordained a priest . 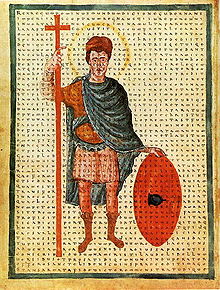 During his time as head of the monastery school (until 822), Hrabanus wrote writings of great thematic variety. They are divided into biblical commentaries , letters, poems, hymns , sermons , textbooks, dogmatic (including liturgical theory ), canonical and hagiographic writings as well as writings on political issues of the epoch. The most famous work is the figure poem cycle De laudibus sanctae crucis (“On the Praise of the Holy Cross”, completed in 814), an opus geminum . It is still preserved today in copies that were probably made directly under the supervision of Hrabanus; the most important copy with the author's own entries is kept in the Vatican Library (Città del Vaticano, Biblioteca apostolica Vaticana, Vat. lat. 124). His three-volume work De institutione clericorum (“On the training of clergy”) , published in 819, testifies to his activity as head of the school . This work is later followed by De sacris ordinibus and De ecclesiastica disciplina .

The largest part of the work is made up of Bible Commentaries, which span almost the entire Old and New Testament . In a narrower sense theological writings are De videndo deo, de puritate cordis et de modo poenitentiae , De praedestinatione , De anima and De passione Domini . The liturgical theory includes De benedictionibus Dei , De divinis officiis , De Eucharistia, De corpore et sanguine Domini , the Opusculum de sacramentis , the Commentarius in Cantica laudum in matutinis and De coena . His martyrology falls into the area of hagiography . Canonical issues are addressed in De oblatione puerorum in quota generatione conubium licitum sit in the Responsa canonica super quibusdam interrogationibus Reginbaldi episcopi , in De consanguineorum nuptiis et de Magorum praestigiis falsisque divinationibus , in two works entitled Paenitentiale (to Archbishop Otgar of Mainz and to Bishop Heribald of Auxerre ). The dispute with Gottschalk von Orbais , who pushed for his release from the monastery, but ultimately failed due to bitter resistance from Hraban, about the oblation (offering) of children to monasteries by their parents and the question of the binding effect of such a decision is led in De oblatione puerorum , in the above-mentioned De praedestinatione as well as in letter 42 to Merkgraf Eberhard von Friuli . In the historical conflicts between Emperor Ludwig the Pious and his sons, a De reverentia filiorum erga patres et subditorum erga reges and De virtutibus et vitiis intervene in favor of the emperor .

In addition to De laudibus sanctae crucis , Hrabanus Maurus wrote numerous other metrical and accenthythmic poems, some of them with rare meter measures , including numerous altartituli and epitaphs , including one for the grave of St. Boniface , whose stele with a relief of the saint, a cross on the back and the inscription sancta crux nos salva (Holy Cross, save us) has been preserved in Mainz (so-called priest stone).

In addition to De Laudibus sanctae crucis , Hraban's most successful work was his encyclopedia De rerum naturis in 22 books, which, based on the Etymologiae of Isidore of Seville , include humans (with their anatomy and diseases), the stars and the plant kingdom represents a cosmic connection. Its extensive handwritten tradition extends from the 9th to the 15th century and includes several illustrated copies, the oldest being the famous 11th century copy from Monte Cassino (Montecassino, Biblioteca dell'Abbazia, cod. 132, approx. 1022 / 23). Shortly before 1467, Adolf Rusch's first incunabulum appeared in Strasbourg. The work served primarily as an aid to Bible exegesis. Whether the illustrations go back to Hrabanus is controversial, but not unlikely. According to a communication from the Diocese of Mainz, the Mainz scientist Franz Stephen Pelgen discovered another manuscript fragment from the 9th century from this work in the Martinus Library in Mainz at the end of June 2011.

Writings on the calculation of time and grammar also come from the school.

Although no vernacular texts have survived from Hrabanus, he is considered to be a promoter of the efforts to make the vernacular language in writing for the purposes of schools and pastoral care in Fulda, which was evident at the time.

Abbot of the Fulda Monastery

On June 15, 822 he became abbot of the Fulda monastery for twenty years , which at that time, including the secondary monasteries, housed a total of over 600 monks. He enlarged the monastery library and made the monastery school one of the most renowned in the Franconian Empire . He increased the church and reliquary treasures significantly. He had the scattered property of the monastery recorded in a large-scale collection of documents, an eight-volume so-called chartular , and organized the management of goods through a hierarchical system of fron yards and upper fron yards. He also took care of the pastoral care of the farmers and had around 30 churches and chapels built, including the Church of the Holy Sepulcher of Lioba St. Peter on Petersberg near Fulda in 836 . Under his leadership, Fulda developed into a leading ecclesiastical center, to which the close relationships with the imperial family maintained by Hrabanus contributed. He repeatedly took on tasks in the imperial service, which forced him to be absent from his monastery for a long time, especially in the later years of his abbate. As a staunch advocate of the idea of ​​imperial unity, he was a follower of Emperor Ludwig the Pious , after his death then of Emperor Lothar I , but not of Ludwig the German , to whose rule Fulda belonged. When he was drawn into the disputes between Ludwig the Pious and his sons, he resigned from his office as abbot in 842 and retired as a scholar to the provostry of St. Peter on the Petersberg.

Despite the differences of opinion, Ludwig elevated him to Archbishop of Mainz in 847, at the age of 67, after a discussion in Rasdorf , a branch of the Fulda Monastery . On June 16 of the same year, Hrabanus took up his post as shepherd of the largest church province in the East Franconian empire. Shortly after taking office, he convened a first synod at which bishops, choir bishops (a predecessor of today's auxiliary bishop ) and abbots in the Mainz Abbey of St. Alban discussed the strengthening of faith and discipline. The preachers were encouraged to preach understandable sermons to the common people.

Around 850 the archbishop in Zell in the Zellertal had the remains of the hermit Philipp von Zell raised, buried in the newly built Salvator Church and wrote the (traditional) altar inscriptions himself, with which St. Philip was officially recognized as a saint.

According to tradition, Hrabanus Maurus died on February 4, 856 in Winkel in the Rheingau and was buried in St. Alban's Abbey near Mainz . He was soon venerated as a saint. In 1515 his remains were transferred by the Archbishop of Mainz, Albrecht von Brandenburg, to Halle (Saale) , from where they later came to Aschaffenburg . His present grave is not known.

A memorial plaque dedicated to him was placed in the Walhalla near Regensburg . 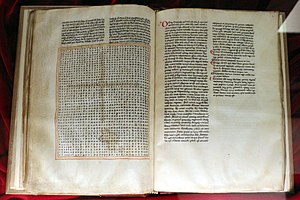 When the so-called Carolingian renaissance got stuck in the beginning due to the division of the empire of Charlemagne and the emerging Eastern Franconia sought its spiritual foundations, Hrabanus Maurus worked as a collector and mediator of the entire philosophical, theological and scientific knowledge of his time.

The abundance of his writings on all areas of knowledge and the large number of his important students earned him the honorary title of "First Teacher of Germania" ( primus praeceptor Germaniae ) in the early 19th century , the justification of which, however, is being questioned by recent historical research. In any case, it is certain that he was the first scholar from the German-speaking area to comment on almost the entire Bible and to present the entire knowledge of his epoch in his writings, and that among his numerous, even literarily productive students, there were important representatives of the Carolingian Renaissance and Gottschalk and Walahfrid Strabo found the two most important poets of the 9th century. Its effect reached far beyond the German-speaking area.

The Pentecostal hymn Veni creator spiritus (Come Creator Spirit), which is still sung today, is, if not written by him (as previously assumed), passed down by him and remains associated with his name. Gustav Mahler placed a resounding monument to the text in the first movement of his mighty 8th symphony .

Hraban's main merit was, on the one hand, the mediation between the Christian ancient tradition and the early medieval way of thinking, in that he rearranged outstanding writings from the ancient world according to the knowledge of the early Middle Ages and published them encyclopedically. On the other hand, he was a completely independent theologian who took an independent position in the controversy of images, in that he also recognized images, in particular the image of the incarnate Son of God, as a means of revelation and interpreted the history of salvation as a history of revelation. He gave essential impulses to the theology of the cross by emphasizing the universality of the cross, which he regarded as the sign of salvation and the basic structure of the entire cosmos, which from the beginning was based on the work of redemption of the cross and thus seemed to be interpreted as a sign of salvation itself. He is a typical representative of the Carolingian Renaissance.

Rabanus Maurus as a literary figure: