The title of this article is ambiguous. Further meanings are listed under Epitaph (disambiguation) .

As an epitaph ( ancient Greek ἐπιτάφιον 'belonging to the grave' or Latin epitaphium , from ἐπί epí 'at', 'on' and τάφος táphos 'grave'; plural epitaphs ; in German also epitaphium , plural epitaphs ) is a funerary inscription or a grave memorial for denotes a deceased on a church wall or a pillar. Epitaphs can be artistically elaborate and, unlike tombs, are not necessarily located at the burial site, in this case it is a subspecies of a cenotaph . 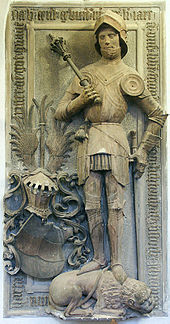 The epitaph emerged from two different roots during the late Middle Ages:

In its simplest form, an epitaph is a board labeled with names and mostly with dates of life. In the 16th and 17th centuries the growing need for representation of the urban bourgeoisie and the nobility led to a rapid development of epitaphs. Especially since the introduction of the Reformation, there have been reworking and secondary uses of epitaphs. Pre-Baroque epitaphs are often modeled on late medieval grave slabs, with elaborate reliefs of the deceased. In the baroque era , the formal pattern of the grave slab became a design option among many, in addition to altars (often with retables ), coffins and many others. Baroque epitaphs are usually built architecturally and sculptured from stone, metal or wood, usually colored and often partially gilded. Another widespread type are memorial plaques bearing oil or tempera paintings. They are mostly made entirely of wood, but canvas is also used as a picture carrier. The frames of these picture panels are often built architecturally and decorated with plastic jewelry, sometimes made of stone, plaster or metal, for example angel heads or capitals and consoles.

The motifs of the sculptural or pictorial design of epitaphs can be divided into four areas:

Like the artistic design, the inscriptions represent the social rank of the deceased. The simplest form of names and dates of their lives mentioned above is therefore comparatively rare to find; People for whom an epitaph was donated at all were usually honored in greater detail. The first extension of the inscription , already taken epigraphically from the medieval tomb , is genealogical information: in the case of married persons, at least the spouse is listed, but often also the respective families of origin. For this purpose, the so-called corpse text has been widespread in the inscription since the Renaissance, usually the quotation from the Bible or song about which was preached at the burial. In the Baroque era in particular, the inscriptions increase in size, extensively honor the life of the deceased and praise their outstanding and pious way of life. Baroque grave or epitaph inscriptions address the reader directly as Memento Mori , depending on the local and individual requirements in the respective national language or in Latin and often in verse form. An example:

“Did he die too? Why do you wonder and not instead explore the transience of the flower and the dew? We are blooming; but that flower is perishable. He was in bloom, but withered, who researched the power of flowers and herbs, the only son of his parents: Johann Christian Harnisch, a qualified physician and successfully practicing doctor, at the age of 34. He who served others was wearied with the bloom of age and the age of the bloom. The herbs in the gardens could not repel the boisterous force of death, who plucked a leaf from the clover on December 18, 1730. It is our common fate to die. What are you faltering, reader? He also died. "