Martina Hartmann as President of MGH at her workplace.

Monumenta Germaniae Historica ( MGH , Latin for "Historical monuments of Germany") is a scientifically edited edition series of historical documents to German history of the Middle Ages . The same name is used to designate the Munich- based institute that publishes this collection. It emerged from the Society for Older German History , founded in 1819, and today it bears the name Monumenta Germaniae Historica (German Institute for Research into the Middle Ages) . The aim of the institution is to make medieval text sources accessible to research and to contribute to scientific research into German and European history through critical studies.

The MGH editions represent a central collection of sources on medieval history; they are often also the authoritative academic editions of the respective texts. The MGH also publishes the German Archive for Research into the Middle Ages (DA), one of the most important specialist journals in medieval studies . In the 19th century in particular, the editions exerted a decisive influence on German medieval research; to this day it is one of the largest coordinated works in the field of historical research.

Start of the project and conception

The Monumenta Germaniae Historica project was founded at the beginning of 1819 by Heinrich Friedrich Karl vom und zum Stein and set itself the ambitious goal of editing the essential historical sources on the “German” past. Initially, the company was organized in the form of a “Society for Older German History”, the general management of which was set up on January 20 in Stein's apartment in Frankfurt. After five consultative sessions, the statutes were announced on June 12, 1819 and the society was opened to a broader (scientific) public. Johann Lambert Büchler gave her and with it the MGH the motto Sanctus amor patriae dat animum (Latin for "The holy love of the fatherland gives the (right) spirit") - a motto in the sense of romantic nationalism at the beginning of the 19th century. Initial differences of opinion about the type and scope of the source collection were fundamentally clarified with the central management plan of 1824, for example it was decided to divide the publications into the five main departments (see next section). At that time, among other things, the following were given as editorial rules: The best manuscripts of a work should be considered in full, the poorer ones only in a selection. The original spelling of the manuscripts should be retained except for the distinction between u, v and w, the punctuation could be modernized.

The publisher Heinrich Wilhelm Hahn the Younger was responsible for the printing ; he passed the order on to Friedrich Bernhard Culemann . The publication was then held by Hahnschen Buchhandlung until 2014 .

In addition, the time from around 500 to 1500 was set as a guideline for the duration of the Monumenta, from the cessation of classical literature to the general use of the art of printing . Ancient classical writers - such as Tacitus - should only be taken into account in extracts. With regard to the spatial extent , the medieval expansion of the Roman-German Empire should be decisive, so that German Switzerland, Alsace-Lorraine, the Baltic provinces and the Netherlands would also be taken into account. In addition, the most important Germanic tribes such as the Vandals , Burgundians and Lombards should also be taken into account: “Until they are mixed up or their fall”, their story “in the broader sense also belongs to ours”, says the company's plan for older German historians 1824. However, the warning from Barthold Georg Niebuhr was also followed , who had great reservations about including the sources of some of the “emigrated tribes”: the Franks were to be accepted without further ado, because their settlement area was part of the Carolingian Empire ; but the Anglo-Saxons , he objected, were toto orbe divisi (Latin: "with their entire (settlement) area separated from [the Roman-German Empire]"), as were the Visigoths .

Georg Heinrich Pertz was the head of the company for many years (1823–1873) ; During the first decades, the secretary was Johann Friedrich Böhmer . One of the most important other employees was Georg Waitz , who was primarily responsible for the scriptores series . Also in 1875 the association was converted into a public corporation, whose first president was Pertz. A central directorate was set up in Berlin, which was financed by the German Reich . In 1935 the Monumenta Germaniae Historica was dissolved into a Reich Institute for Older German History .

In 1945 the Monumenta Germaniae Historica was restored by representatives of all German academies and the Austrian Academy of Sciences . The MGH have been based in Munich since 1949, and in the Bavarian State Library since 1967 . In 1963, the Free State of Bavaria gave the institute the legal form of a corporation under public law . In 2004, MGH, financially supported by the German Research Foundation , began to put all of its editions that are older than three years online in the form of digitized scans and full texts (see web links). The volumes of the Monumenta Germaniae Historica have been published by Harrassowitz Verlag since 2014 .

Numerous MGH chairmen have obtained their doctorates from previous presidents of the publishing company, which documents the high level of personal continuity and the close amalgamation of university teaching and institute work. Since April 2012 the Fuhrmann student Claudia Märtl has been President of MGH for a limited period of two years. Shortly afterwards, the MGH were subjected to an evaluation by the State Ministry for Education, Culture, Science and Art. The intention was to unite the institute with the Bavarian Academy of Sciences. Märtl's efforts to institutionally secure the presidential position on a permanent basis failed because of the hesitant attitude of the ministry under the leadership of Wolfgang Heubisch ( FDP ). In this context, at the instigation of the central management, a letter was written to the then Bavarian Prime Minister Horst Seehofer , in which the dangers of the evaluation proposals for Bavarian science policy were pointed out. On March 31, 2014 Märtl resigned as president in protest against the austerity measures of the Free State of Bavaria and reform demands of the State Ministry, which had been taken over by Ludwig Spaenle (CSU) . In view of the savings measures taken by the Free State of Bavaria, which endanger the continued existence of the institution, Märtl decided not to extend the term beyond March 31, 2014.

From 2014 to 2018 Marc-Aeilko Aris was acting president of the MGH. During this time the statutes of MGH were changed, which resulted in significant structural changes. The Schieffer student Martina Hartmann became MGH President in 2018. Stefan Petersen became the President's deputy . The regular budget of the MGH had expenses of 1,804,137.35 euros. Of this, 1,750,752.10 euros went to the state budget and 53,385.25 euros were financed by third-party funds.

On January 20, 2019, the Monumenta Germaniae Historica celebrated the 200th anniversary of its foundation. On this occasion, events will take place in Berlin, Munich, Rome and Vienna in 2019. The anniversary publication “Making the Middle Ages Readable” was published in summer 2019. A target agreement was signed with the Bavarian Minister of Science Bernd Sibler in January 2019. The aim is to advance digitization and to intensify work with foreign scientists.

Publications and departments of the Monumenta 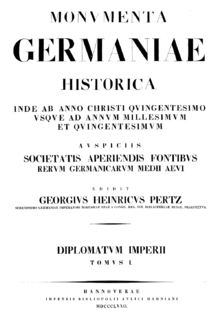 Title of the edition "Diplomata Imperii", Volume I, Hanover 1872

The publications of the Monumenta Germaniae Historica appear mainly in five sections, the Scriptores (Latin for “writer” - contains narrative sources such as vitae , chronicles , annals , state writings ), the Leges (Latin for “laws” - legal sources in the broader sense; normative texts ), the Diplomata (Latin for "documents" - mainly documents of the Frankish and German rulers), the Epistolae (Latin for "letters") and the Antiquitates (Latin for "antiquities" - contains among other things poems, necrology , memorial books ). The individual publications and various subordinate edition series appear within these departments. The numbers of bands mentioned here refer to the respective row count; regardless of this, some of the individual numbers contain several partial volumes.

Outside of the five sections (or published) at the Monumenta Germaniae Historica:

The presidents of the Monumenta Germaniae Historica were from its foundation until today:

The " Selected Sources on German History of the Middle Ages " (Freiherr vom Stein Memorial Edition / FSGA) prints the medieval sources in the original language and in German translation.