Georg Waitz (born October 9, 1813 in Flensburg , † May 24, 1886 in Berlin ) was a German legal historian and medievalist . He is one of the best known editors of historical sources on German history .

Waitz studied from 1832 to 1836 at the Christian-Albrechts-Universität Kiel (then Christiana-Albertina or Academia Holsatorum Chiloniensis) and then at the Friedrich-Wilhelms-Universität, first of all law , classical philology , German studies , philosophy and evangelical theology , later history . Under the influence of historians such as Barthold Georg Niebuhr and Leopold von Ranke , Waitz, who had initially enrolled in the law faculty of the Christian Albrechts University in Kiel in 1832, decided to make history his profession. With Ranke at the University of Berlin, where he studied from 1833, among others with the founder of the scientific text criticism Karl Lachmann and with the founder of the historical school of law Friedrich Carl von Savigny , he was also in 1836 with the work De chronici Urspergensis prima parte, eius auctore, fontibus et apud posteros auctoritate (Berlin 1836) received his doctorate after switching from the law faculty to the philosophy faculty in 1835. His first major independent scientific treatise, however, was the award-winning work on Heinrich I from the Philosophical Faculty, which was later to be developed into the corresponding volume in the yearbooks of the German Empire . Working on this major Ranke project brought Waitz into close contact with the other members of the so-called Ranke School Wilhelm von Dönniges , Wilhelm von Giesebrecht , Siegfried Hirsch , Rudolf Köpke and Roger Wilmans . Waitz then worked in Hanover , from 1842 in Berlin, as a research assistant to Georg Heinrich Pertz , to whom he had been recommended by Ranke, with the Monumenta Germaniae Historica , the central collection of German sources from the Middle Ages . Another award-winning prize work, written together with Hirsch, this time for the Göttingen Academy of Sciences , decided the authenticity debate about the Chronicon Corbeiense in favor of the forgery thesis and thus against Anton Christian Wedekind , who advocated authenticity and had offered the prize.

In 1842 Waitz was appointed full professor of history by the University of Kiel. In the same year he was married to Clara Schelling, a daughter of the philosopher Friedrich Wilhelm Schelling . In 1847 he became involved with the medievalist, city and constitutional historian Karl Hegel in the “Association of German Historians”, which was officially founded under the chairmanship of Pertz, and which emerged from the first Germanist meeting in Frankfurt am Main in 1846. Since then, Waitz has had a lifelong collegial friendship with the historian Hegel, based on common research interests and documented in a lively exchange of letters. In 1848 he moved to Göttingen University , where he co-founded the historical seminar, which was recognized worldwide as the Göttingen historical school . The newly founded Historical Commission at the Bavarian Academy of Sciences in Munich elected him to its full member in 1858. In 1860 he received an honorary doctorate in law from Berlin University. In 1875 he became President of the MGH, but gave up his professorship in Göttingen and moved to Berlin, where he lived until his death in 1886. Since 1842 he was a corresponding and since 1875 a full member of the Prussian Academy of Sciences .

Waitz is buried in the old St.-Matthäus-Kirchhof Berlin . His grave was marked as an honorary grave of the city of Berlin from 1965 to 2014 .

Waitzstraße was named after him in Flensburg.

Waitz's life's work is the "German constitutional history", which extends from the Teutonic era to the middle of the 12th century and is still valuable today because of its wealth of material (8 vols., 1844–1878, revised vols. 1–4, 1865–1885) . With this work he stood in the tradition of national historiography , which was shaped by the inner connection between the scientification of the subject of history and the nation- building process. In addition, he wrote numerous individual studies, often of a source-related and critical nature. In his not a few regional studies he reached into modern times, which he also dealt with to a considerable extent in his teaching.

Waitz also edited and continued the source study of German history by Friedrich Christoph Dahlmann (3rd – 5th ed., 1869–1883). The work also contained literature references from the beginning, and so it developed into a pure bibliography, as which the Dahlmann-Waitz is still known today in its more recent editions. He also worked on the Rotteck-Welcker'schen Staatslexikon , the historical journal and the Allgemeine Deutsche Biographie .

Waitz is one of the outstanding representatives of medieval history who, in turn, shaped by scholars such as Savigny, Ranke, Niebuhr and Lachmann, made a breakthrough in the new, strictly scientific and source-critical, methodologically and philologically equally trained historical studies in the second half of the 19th century helped. Characteristic of his research are the reluctance to form theses that are not adequately supported by sources and the demand for unconditional objectivity ( positivism ), the rejection of the back-projection of the results of later developments in the early days to fill and interpret the incomplete tradition, and the insistence on the independence and autonomy of the respective historical epoch ( historicism ) as well as the strong interest in legal, institutional and constitutional history in a broad sense that includes parts of social history. Editing and researching the sources and their handwritten tradition took Waitz on numerous library trips across Europe. Through the quality of his research and teaching and the success of his numerous students, he established the high reputation of history at the University of Göttingen in the 19th century and led the Monumenta Germaniae Historica from a critical situation to a new bloom. The strictly scientific orientation and the extensive renunciation of personal history meant that Waitz did not gain general fame beyond the specialist world with his work as a historian, despite some popular scientific works.

In 1846 Waitz became a member of the Holstein assembly of estates . In the same year he took part in the so-called Germanist Days and was co-author of an open letter to the Danish King Christian VIII on the question of Schleswig's succession, which earned him a reprimand from the Danish government. In the 1860s, too, he campaigned for the indivisibility of Schleswig-Holstein and Schleswig's membership of the German Confederation . 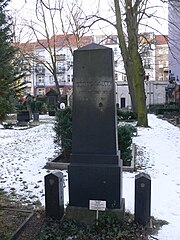