Bordesholm is a municipality of the Bordesholm office in the Rendsburg-Eckernförde district in Schleswig-Holstein .

Bordesholm is between Kiel and Neumünster . The name means "on the shore of the island". The L 318 runs through the village in a north-south direction. In the north, the L 49 (in an east-west direction) runs along Bordesholm. In the south-west of Bordesholm is the approx. 70 ha large and up to 8 m deep Bordesholmer See.

The district of Alt-Bordesholm around the monastery church is located on a former island, the monastery island . Extensive water level reductions and structural changes (parking lots and buildings) have meant that the island character has been lost and is only indicated by the wet grassland surrounding the former island. The Bordesholmer See ( 24  m above sea  level ) continues to shape the scenic character of the place. The lake drains through the Stintgraben and the Schmalsteder Mühlenteich into the Eider . In the west of the lake there is an approximately 44.8 hectare mixed deciduous forest (known as "Wildhof") with partly good stocks of old oaks , some of which have been placed under special protection because of bat populations . In the immediate vicinity of the shore there are wet forests, characterized by alders , ash trees and willows . At the southern end of the lake there is a barely visible bay with extensive stocks of reed beds and a well-developed alder swamp. Because of the secluded location, an artificial breeding container for the kingfisher was set up here. The island in Bordesholmer Lake is used as a breeding ground for gray and Canada geese.

In the south, the municipality borders on the Dosenmoor , one of the best preserved raised bogs in the hill country . Extensive renaturation measures are intended to improve the condition in the long term. Otherwise the municipality is characterized by settlements and intensive agriculture.

Bordesholm owes its coat of arms to the 670-year-old Bordesholm linden tree , which is located near the monastery church. On May 29, 2018, two large trunks of the linden tree broke, as they had been infested with the crust fungus for years , so that only a remnant of the natural monument remained.

Town hall of the municipality and the Bordesholm office

The region from the Paleolithic to the Middle Ages

Settlement in the Bordesholm area can be proven as early as the Paleolithic (9000 BC). From around 5000 BC Individual groups settled on the edges of the swamps and lakes. The remains of four megalithic systems were found on the "Tannenbergskoppel", the foothills of a terminal moraine . The hill is oriented north-south, 400 m long and 200 m wide and is bordered on three sides by swampy lowlands, which were once open waters. On the northern edge of the Tannenbergskoppel, a Neolithic flat burial ground of the funnel cup culture was also examined. At that time, forest areas were cleared, domestic animals were raised and crops were grown in the area. In the Bronze Age burials took place in large burial mounds, including in the still existing Brautberg (around 1600 BC) one kilometer north of Bordesholm. The heavily forested and water-rich region remained sparsely populated for a long time. In the Middle Ages around 850, the Holsten who had settled in the region first came into contact with Christianity through the missionary Ansgar . A systematic spread of the Christian faith did not take place for the next 300 years.

The basis for the later development of the place was laid in 1330 by the move of the Augustinian canon monastery, founded by Bishop Vicelin († 1154) in 1127 from Neumünster to an island in what was then Eidersteder See. In 1475/76 the Bordesholmer Marienklage was created , a spiritual game that was performed annually in the collegiate church until the Reformation; In 1920 it was considered by Wolfgang Stammler as "the most beautiful work that the veneration of Mary produced in the Middle Ages". In 1490 the pen joined the reform movement of the Devotio moderna and joined the Windesheim congregation . The construction of the today Monastery Bordesholm preserved monastery church was started in 1309 and includes u. a. the tomb of Duchess Anna of Brandenburg (1487–1514) next to her husband Friedrich I (1471–1533), who was educated in the collegiate school of Bordesholm, and the epitaph of the scholar Johann Daniel Major (1634–1693). The Canon Monastery became the cultural and economic center of the region between Kiel and Neumünster.

In the course of the Reformation , the Canons' Monastery was closed in 1566 under Duke Hans the Elder . The secular Herzoglich-Gottorfsche Amt Bordesholm , owned by the Gottorf dukes, was established on almost identical territory of the monastery . When the Latin school, which was housed in the monastery, was given up in 1665 for the founding of the Christian Albrechts University in Kiel , the church and the farm buildings fell into disrepair. The monastery library then formed the basis of the Kiel University Library . The Bordesholmer Altar by Hans Brüggemann was transferred to the Schleswig Cathedral . First mention as an independent local management unit ( "ground district" ) is carried 1827. Bordesholm belonged 1739-1773 for bulk Fürstliches proportion of Duchy Holstein and after the Treaty of Zarskoje Selo to 1864 for Danish state . The Altona-Kieler Chaussee ran through the town . This 94 km long road was built between 1830 and 1832 by the then sovereign, King Friedrich VI. by Denmark (the Bordesholmer section was later part of Reichsstrasse 4, then Bundesstrasse 4, since the 1990s Landesstrasse 318). In 1844 a train station was opened on the Hamburg-Altona-Kiel route about two kilometers east of what was then the town center. The station in the Eidersted municipality was first called Bordesholm and was later renamed Bordesholm station .

The Bordesholm community was founded in 1867

After the German-Danish War , Schleswig-Holstein became the Prussian province of Schleswig-Holstein in the North German Confederation . As part of the Prussian administrative reform in 1867, the office was dissolved and the newly created municipality of Bordesholm only became part of the Kiel district (1867 to 1883). Bordesholm later became the official seat for the district of Kiel (1883 to 1907) and then for the district of Bordesholm (1907 to 1932). From 1867 to 1975 it was the seat of a local court.

Bordesholm as an unofficial municipality

The town hall on the market square became too small over time. At the beginning of the 2000s, the development of the town center began with the creation of the “Mühlenhof” town center. In September 2006, the Bordesholm community bought the former "Wendeln Brot GmbH" site near the train station from the Kamps company . The former Wendeln bread factory (Rix-Mühlenwerke) was demolished. At this point a new town hall was built in 2010 on Mühlenstrasse for the community and the newly created office.

Of the 19 seats in the municipal council, the CDU has had six seats since the local elections in 2018. The SPD has five seats, the Greens four, the FDP and the Independent Voting Association Bordesholm UWB each received two seats.

Blazon : "In gold over a blue corrugated shield base, this is covered with a silver lily, a growing green linden tree."

Since 1993 there has been a community partnership with Ķekava in Latvia.

As the central supplier of the surrounding area, Bordesholm offers not only numerous shopping opportunities, but also an agricultural trade for feed and grain as well as a veterinary practice for farm animals.

To the west of the municipality is the Bordesholmer triangle , where the federal highway 215 to Kiel branches off from the federal highway 7 from Hamburg to Flensburg. The L 318 also runs through Bordesholm. Bordesholm has a train station on the Hamburg – Kiel railway line . From there you can travel to Hamburg via Neumünster and Kiel twice an hour .

The Bordesholm Administration Academy has been located in Bordesholm since 1946 . 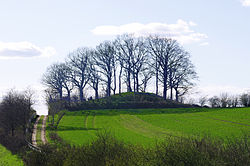 Municipalities in the Rendsburg-Eckernförde district