Groß Vollstedt is a municipality in the Westensee Nature Park in the Rendsburg-Eckernförde district in Schleswig-Holstein . Katenstedt and the Westenseer Endmoräne landscape protection area are located in the municipality.

Groß Vollstedt is located in the triangle between the cities of Rendsburg , Kiel and Neumünster and the federal highways 7 , 210 and 215 . The Vollstedter See and the Brahmsee are nearby . 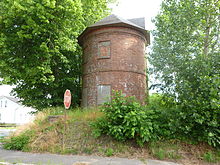 Archaeological finds from the Stone Age and numerous barrows from the Bronze Age prove that the municipality was already settled in prehistoric times. The place itself was probably founded in the Iron Age . It was first mentioned shortly before 1200 as Volcstide , Kleinvollstedt was probably only founded in the 13th century as a daughter settlement of Vollstedt. Volcstide indicates the place / residence of the Fulko / Folko. Fulko or Folko is related to the word people and means " warband ".

In 1925 a water tower was built in the community , which is still preserved today. However, it no longer serves as a water supply, but as an owl and bat protection cave.

Of the twelve seats in the municipal council, the SPD has six seats since the 2018 local elections, the KWG three seats and the CDU three seats.

Blazon : “Divided by silver and green. At the top two fan-shaped oak leaves connected by a common stem, at the bottom a megalithic grave consisting of three bearing stones and a capstone in mixed up colors. "

The two oak leaves symbolize the double oak that still stands in the village today. It was planted in memory of the Schleswig-Holstein elevation of 1848.

Municipalities in the Rendsburg-Eckernförde district