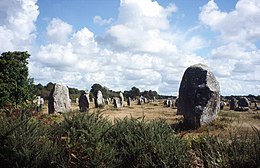 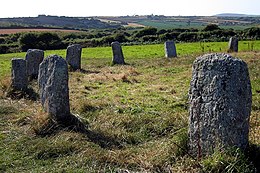 As a megalith (from ancient Greek μέγας mégas "large" and λίθος líthos "stone") archeology describes a large, mostly uncut stone block that was erected and sometimes positioned in stone settings . 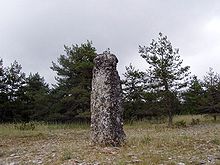 Menhir in the Cevennes

The menhir of St. Uzec in Brittany was Christianized by adding various symbols

In Northern and Western Europe, megalithic were originally large stone settings ( dolmen , from Breton taol 'table' and maen 'stone' , actually "stone table") and upright stones that either stand individually as menhir or are arranged in several, for example Form stone circles ( Cromlechs ).

In 1867, at the second Congrès International d'Anthropologie et d'Archéologie Préhistoriques , an agreement was reached on only designating monuments made of almost uncut stones as megaliths, for example not the Egyptian obelisks or the Parisian Halle aux blés . The walls of Tyrins have been called Cyclopean , not megalithic. However, this definition excludes, for example, the Triliths of Stonehenge and the megalithic temples of Malta , which are composed of worked stones. Colin Renfrew pointed out the difference in appearance and function between the older, uncut stone monuments and the newer, more complex constructions .

Following Glyn Daniel , only Neolithic buildings made of large stones are now referred to as megaliths, because otherwise, as Daniel remarks, some Welsh pigsties could also be described as megalithic.

Gordon Childe proposed in 1946 that additional structures should be included:

For Childe, only collective burials are to be classified as megalithic. Closed stone boxes for individual burials, on the other hand, are not locked, even if they are made of large stones, such as some dolmens in North Africa and Palestine .

Childe's definition is unwieldy and cannot be used in areas without bone preservation, and accordingly it has not caught on in further research.

In 1956, Karl Joseph Narr defined a megalithic structure as follows:

Controversial types remain “large systems made from smaller stones” and “systems carved into the rock”. Fool adds that today there is "little inclination" to call domed tombs and tombs , as they are known from the Mycenaean Bronze Age, megalithic.

The first division of the megalithic structures in Northern Europe was made by Oskar Montelius . He distinguished dolmens, passage graves and stone boxes. His system was expanded by Sprockhoff and Schuldt, among others. There are now a large number of national and regional typologies that cannot be combined into a single linguistic usage. Therefore, Furholt et al. 2010 presented a classification that combines various individual features.

The various megalithic structures in Europe and other continents do not necessarily suggest a common culture (" megalithic culture "). Pottery and other artefacts that accompany the stone setting do not always belong to the same culture; this also applies to the most common types, i.e. menhirs , dolmens , passage graves or stone boxes . According to others, the similarity of the megalithic structures preserved on the European Atlantic and North Sea coasts suggests a genetic relationship, even if the accompanying artifacts do not belong to the same culture, e.g. B. by colonization or cultural exchange .

In Europe, there are diverse relationships between the long-lived, often rebuilt megalithic and related sites made of less permanent material (such as wooden circles, etc.), within which one usually searches in vain for a scheme of dependencies, chronology and geographical distribution. This is usually only possible on a regional level. The question of whether the different regional types have independent origins or a common root is still open. Various construction methods are known in Europe in which (at least in part) megaliths were used:

In Europe, individual megaliths (menhirs) or groups of individual stones have been set up in stone settings in some regions :

Standing stones or similar megalithic forms from the Iron Age or the Early Middle Ages are not part of the traditional megalithic systems. This includes:

Origin of the building material

The stones of the northern European megaliths come from the deposits of the Ice Age (erratic blocks, granites , gneisses and other rocks). Many of the remaining megaliths were broken from relatively soft sedimentary rocks.

The formation of theories as well as the criteria for inclusion or exclusion as a megalithic monument or building were limited until the end due to the limited possibilities for age determination: This means that an essential category was missing to determine affiliations or simultaneity and sequences via dating.

As late as 1956, Karl Joseph Narr had basically pointed out that “prehistoric megalithicism does not coincide with any group of forms that can be worked out by archaeological means, or that with some probability it can be shown to be rooted in such a complex.”

In 2015, the University of Gothenburg started a project under the direction of the Neolithic researcher Bettina Schulz Paulsson, which opened up a total of 35,000 existing megalithic objects on mainland Europe and in the western Mediterranean area, including those with older findings. With the now significantly improved analysis technology of the radiocarbon method, "the age of 2410 sites was (determined) on the basis of samples, some of which were already examined earlier, in the context of megalithic buildings and artifacts of the same age from neighboring cultures."

Schulz Paulsson summarized the work in book form in 2017; A year and a half later, the scientific journal PNAS ( Proceedings of the National Academy of Sciences of the United States of America ) published its report and thus constituted it as basic research.

For the results of the research see: Data collection and conclusions 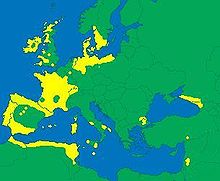 Distribution map of megaliths in Europe, the Middle East and North Africa

Card with statue menhirs in Europe

The construction with megaliths ( French pierre dressée ) took place in Europe between around 4500 BC. BC ( Brittany ) and 800 BC When the last large stones were built in Sardinia . The menhirs are found primarily in southern and western Europe; in Germany between Saarland and Thuringia.

Many megalithic systems have been destroyed since industrialization. Megaliths fell victim to land consolidation, landscaping projects or the construction of churches and ports. In northern Germany, they were used to build dikes and, in shredded form, as paving stones.

See also : Megaliths on the Upper Rhine  and Street of the Megalithic Culture

Megaliths can be found in Georgia , Turkey , Syria and Palestine , India , Indochina , Indonesia and Korea as well as in Africa ( North Africa , Ethiopia and Madagascar ) without a genetic link between the locations having to exist. A geological curiosity is the split Al-Naslaa megalith near the Tayma oasis in Saudi Arabia . The Moai statues of Easter Island , the Olmec heads , a few Toltec and Aztec statues and several monuments in Tiahuanaco can also be described as "megalithic".

See also : Megalithic systems on the Golan  and megalithic culture

In many cases it is now unknown what purposes megalithic structures served and why they were built. They often served as graves and for religious purposes. Sometimes a function as a memorial, as a border marker or as a symbol of political power comes into consideration. Some objects are also considered to be of importance for astronomical calculations, a well-known example is the Stonehenge complex ; The observatory at Nabta-Playa in southern Egypt is less known .

The size of the stones enticed people used to on giant to believe (Giant), who have transported the stones had. This can still be seen in the etymology of the name " Hinkelstein ": Due to a misunderstanding, the "Hünenstein" became a "Hühnerstein". In the south-west of Germany there are the dialect words Hünkel or Hinkel for "chicken"  - this is how the German word formation "Hinkelstein" came about. With Christianization, legends emerged about the creation of megaliths by the devil's hand. Some have the devil in their name ( Teufelssteine , Devil's Arrows , Devils Circles etc.).

In the 18th and 19th centuries there was again interest in the megalithic systems. At that time, many believed that the buildings could be traced back to the Druids of the Celts , such as the English antiquarian William Stukeley .

Megalithic systems could only arise where stones could be worked with the resources of the time. In the area of ​​the funnel beaker culture (TBK), these were essentially the erratic blocks of the Ice Age that only had to be transported or, if necessary, split. Where erratic blocks were not available in sufficient quantity and size, other structures were built, e.g. B. in the area of ​​the southern TBK the death huts and the chamber facilities in the low mountain range (south of the Mittelland Canal ) in Germany, mainly between the Weser and Saale.