Scheme of a gallery using the example of Pierre-aux-Fées 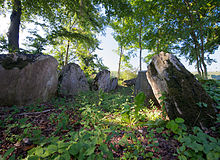 The designation gallery grave for German megalithic systems of a certain type (derived from Italian: galleria "long colonnade") is a translation from French ( Allée couverte ) and was created due to the similarity of the German and Eastern French systems.

German gallery graves, like French ones, are usually deepened and made of orthostats and capstones or wooden ceilings. From the Paris Basin to Belgium there are also non-megalithic structures with a comparable rectangular plan that can be attributed to the Seine-Oise-Marne culture (SOM culture).

The 30 or so German systems that occur from the Westphalian Bight to the Züschen area , southwest of Kassel , are also called "Hessian-Westphalian stone boxes ". The rare ten plants east of the West German Steinkisten area, in Lower Saxony or on the Lahn and Moselle , which almost connect to the distribution area in Western Europe, are in some cases very small ( Liebenburg , Niederzeuzheim , Schankweiler ). In the east they are called the Central German Chamber or Chamber Graves.

The funnel cup culture (TBK) can be assigned to the galleries north of the Haarstrang (mountains) and in northern Lower Saxony ( gallery grave of Sorsum ). The east of the Westphalian Bay (near Warburg) and south of the Haarstrang, however, are mostly part of the Wartberg culture .

The "Hessian-Westphalian stone boxes" are collective graves and are divided into two types.

In 2010 the 20 and 25 m long gallery graves of Schmerlecke were discovered and excavated in Erwitte- Schmerlecke .

The Allée couverte, ( German for  "covered corridor" ) is a long dolmen , particularly widespread in France , whose floor plan corresponds to that of a corridor, while the width and height are low. The German equivalent is called a gallery grave. The Allée couverte is generally separated by a wall into two parts of equal height but unequal length, the chamber ( French cella ) and the antechamber ( French antecella ). The access is almost always on the longitudinal axis. The side walls are made of orthostats ( German "supporting stones" ). Depending on the length, the allée couverte is covered horizontally by one or more cap stones. Allées couvertes can be divided into:

In Languedoc, some very long dolmens with a corridor over 15 meters long ( Dolmen Lo Morrel dos Fados , Saint-Eugène ) were previously classified as Allées couvertes . Jean Guilaine has shown that these are not real Allées couvertes because their architecture does not correspond to the generally accepted definition:

In the case of the Allées couvertes in the Aude and Roussillon , it is therefore appropriate to speak of dolmens with wide passages.

In the Seine-Oise-Marne culture in France and Belgium, gallery graves or Allées Couvertes / sepultures couvertes are designed very differently in the details, some were even carved into the rock. Alleys, the length of which varies between 10 m and 20 m, are also the majority here. The chamber is sometimes divided by threshold, side or perforated stones ( La Pierre Turquaise - Dep. Val d'Oise). The shorter galleries are a bit lower overall. Some have lateral chambers at the head end separated by side buttresses.

The simple Allée couverte always has a rectangular chamber, which is held by several side panels and covered by ceiling panels. The interior is divided by one or more partitions that do not go through from wall to wall or are provided with a soul hole. Every now and then a trilith is added in front of the entrance. There are varieties of the primary type.

The Irish wedge shaped gallery graves or wedge tombs are derived from the Breton Allées couvertes by some researchers. They are characterized by the fact that the chamber and entrance are not structurally separated and have the same width. However, there may be a threshold stone or an axial secondary chamber. These systems are all built above ground and are shorter than the continental systems.