A trilith ( ancient Greek τρεῖς, τρία treis, tria , German 'three' and λίθος lithos 'stone, rock') is a gate , passage or an architectural element that consists of two bearing stones and a (third) capstone on top, an independent statics and is not directly interlocked with other components.

Triliths ( English trilithon ) were mainly used in Neolithic or Bronze Age buildings in megalithic construction, including in Stonehenge or in the temples on Malta ( Ħaġar Qim , Kordin , Mnajdra , Tarxien on the Ġgantija ). The use of three-point unprocessed stones, as they are, for. B. occur in the yoke structures of passage graves or large dolms, however, does not meet the criterion, because only gate-like three-stone construction methods are so designated, even if they had no gate function, as in the Sarsen circle of Stonehenge. 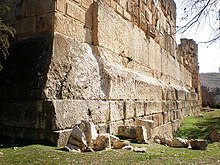 Deviating from normal usage, a group of three giant building blocks lying next to one another in the Roman temple complexes of Baalbek in Lebanon, known for their gigantism, is also called a trilith. Their average weight is 800 t, which means that the ensemble is not only one of the largest ancient monoliths , but also one of the whole of history .