David Roberts : The entrance to the Temple of Bacchus in Baalbek

The temple complexes of Baalbek contain some of the largest and best preserved examples of Roman architecture from the Middle East and can be compared with the ancient cities of Palmyra or Gerasa in terms of their artistic and cultural-historical significance . They were mainly built in the 2nd and 3rd centuries AD and are located in the city of Baalbek in Lebanon . The temple complexes include the huge Jupiter sanctuary, the exceptionally well-preserved so-called Bacchus temple and the round temple with its unique shape. Special features of the buildings are the extremely rich decoration and the monumentality of the structural elements used.

Lion figure at the temple of Jupiter

The Jupiter sanctuary was gradually built around an old prehistoric settlement mound from the late 1st century AD. There is no evidence of pre-Roman sacred architecture. There is also no evidence of older cults. Work on the sanctuary dragged on into the 3rd century when the temples, together with the city of Baalbek, reached their peak. It is not known when the Temple of Jupiter was destroyed and whether this was due to natural causes such as fire or earthquake or to human activity. Most sources point to the 6th century. The anonymous follower of the Chronicle of Zacharias Rhetor reports that the temple, which was still in use up to this point in time, was burned down in 554 after a lightning strike (Zach. Rhet. HE 8,4); on the other hand, under Emperor Tiberius Constantinus, the admirers of Jupiter Heliopolitanus are said to have made up the majority in Baalbek around 580 ( Joh. Eph. HE 3,27). At that time there were massive measures against the Old Believers. When a basilica was built a little later in the altar courtyard, including parts from the Temple of Jupiter, it must have been partially damaged and no longer in use.

From the 12th century onwards, the Arab Ayyubids converted the Jupiter shrine and the Temple of Bacchus into a fortress. This protected large parts of the ancient complex, for example the Temple of Bacchus was used as a palace. In 1759, a severe earthquake overturned three pillars of the Temple of Jupiter, and since then six pillars have stood upright. After his visit to Palestine in 1898 and a visit to Baalbek, the German Emperor Wilhelm II arranged for the temple complex to be excavated. A German excavation led by Professor Otto Puchstein uncovered large areas between 1900 and 1905. Between the 1920s and 1940s, initially French archaeologists and from 1947 Lebanese archaeologists continued the work. In addition to further excavations, the main focus was on reconstruction work.

The six pillars of the Temple of Jupiter with podium

Podium of the Temple of Jupiter with the three “ Trilithon ” 800-ton stones, the largest stones ever built in the world, and a layer of 350-ton stones underneath

The god worshiped in the sanctuary, Jupiter Optimus Maximus Heliopolitanus, is mentioned in many inscriptions. His sanctuary was built around an old settlement mound. Like all large buildings in Baalbek, it was built from the limestone extracted from the surrounding quarries. The construction time was successively between the first century and the early third century AD. It is made up of four components: the Temple of Jupiter, the Altar Court, the hexagonal forecourt and the Propylaea . In front of the Propylaea there is a square that is bordered by a row of horseshoe-shaped seating steps.

The sanctuary is strictly symmetrical around a longitudinal axis, it is 287 m long from the back of the podium of the temple to the front edge of the Propylaea. Its height and the courtyard walls, which are closed towards the outside, clearly set it apart from its surroundings. The architectural order of the sanctuary is predominantly Corinthian .

The Propylaea is an elongated structure 75 m long and 11.60 m deep. Between two towers, a 50 m wide hall front with 12 columns opens outwards. In the same width a vanished today launched staircase to the Propylaea up whose floor level is 7.28 m above the surrounding area. The Propylaea are depicted on coins from the third century AD. Three inscriptions on the column bases tell of the gilding of capitals in honor of Emperor Caracalla and his mother Julia Domna .

Through three doors, of which the middle one is significantly larger than the two side entrances, you get into the Hexagonalhof on the same floor level. Its dimensions are 52 m east-west × 73 m north-south. Its shape is unique in Roman architecture, its function has not yet been clarified. As a hexagon, it can only be recognized inside the room. It was surrounded by porticoes all around. The middle part is lower down and is in the open air. On the north and south sides, behind the halls, there are two exedra placed at an angle to each other , the walls of which were adorned with aedicules .

Again through three doors with a greatly enlarged middle section you get to the altar courtyard. This is 120 × 125 m in size and surrounded on three sides by pillared halls, the column shafts were made of Egyptian rose granite and gray granite that was mined near the Aswan dams. Behind these halls there are rectangular and semicircular exedra in regular alternation, the east side is varied by attached rooms and large apses . The walls are adorned with aedicules and apses containing statues and images. On the large open area of ​​the altar courtyard, which is three steps lower than the portico, there were a number of fixtures and installations. Two large tower altars stand one behind the other in the central axis of the sanctuary, they were accessible by stairs. They seem to be shaped by oriental or Egyptian cult influences.

There is a large water basin in front of the large central exedra in the north and south halls.

A large, three-part flight of stairs led up to the Temple of Jupiter. This was a decastyl pseudodipteros . Its 45 m wide front had ten columns 20 m high, the 86 m long side had 19 columns. The cella is lost, its foundation walls show that the axes of the cella walls were aligned with the third and eighth columns of the front and the third penultimate column on the long side. It can be assumed that there was another column position in front of the vestibule of the temple.

The temple had a gable roof and a door or a large window in the front gable. It is unclear whether there was a so-called adyton , an elevation for a cult image often documented in Syrian temples, at the end of the cella.

The temple's frieze was decorated with alternating bull and lion protomes. A stonemason inscription in Greek on the top of a column shows that work on the temple was carried out in AD 60.

The temple can be seen in different views on coins from the Severan period and from the first half of the third century AD. The temple of Jupiter should be surrounded by a gigantic podium. Since the floor level is 14 m above the surrounding area, but the podium should usually consist of three rows of stones, huge blocks were cut out of the quarry. Since the podium was never completed, only three of the giant stones are on the back as a podium. Their dimensions are a little over 19 m in length, around 4 m in height and 3.60 m in width. The arithmetic mean weight is around 800 tons each. The three stones, which were already known as " trilithons " in the Middle Ages, are considered to be the largest built stones in ancient building history. 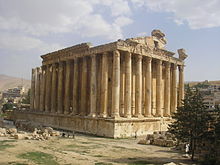 The so-called Bacchus Temple is located south of the Temple of Jupiter. Its assignment is not confirmed. It was probably also built in the Corinthian order in the later second century AD.

The temple of Bacchus is an octastyle peripteros on a Roman podium with a front staircase. The podium is 83 m long and 36 m wide. The portico has a size of 31 mx 63 m. The eight columns on the front and fifteen on the long sides are 17.60 m high.

The so-called Bacchus temple is one of the best preserved sacred buildings in the Roman world, thanks to its inclusion in the castle and its use as a palace. It is almost completely preserved, the gable roof is missing and the front row of columns has been sacrificed to the Arab castle wall and a corner tower that is still standing today.

Essential characteristics of the temple are its large door almost 13 m high, which is framed by a richly decorated frame with vine and ivy tendrils as well as wheat ears and poppy seed capsules, the very well-preserved interior with surrounding seating steps, a rich wall structure and the Syrian Adyton and the Ceiling cassettes for the roofing of the ring hall, which are provided with various reliefs of deities, many of them representations of tyches, and a lush tendril. It can be assumed that one of the two temples standing next to each other on coins of the third century is to be regarded as the temple of Bacchus.

South of the hexagonal courtyard of the Jupiter sanctuary is a small sanctuary area with two temples. The first is a small pseudoperipteros , that is, with half-columns placed on the cella. It has Corinthian full-leaf capitals and is approx. 25 m long and 12.5 m wide. The temple was excavated in the 1960s by the Lebanese antiquities administration and partially restored. Its allocation is unknown, its construction period is likely to be in the early Roman Empire.

The round temple, known for a long time as the temple of Venus, is almost at right angles to it, although this assignment cannot be kept. The round temple, along with the temples of Jupiter and Bacchus, was one of the three buildings that are always visible and therefore always known. The shape of its curved podium and the resulting cella design, including the columns with five-sided Corinthian capitals, is unique and has always been referred to as “baroque”. The round temple is almost 16 m wide and 28 m long, the podium is 2.91 m high, the column height is 8.56 m. The building may have been made in the third century AD.

The temple of Mercury was located on the top of the hill Sheik Abd'allah, on the northern slope of which the ancient buildings are located. It has completely disappeared, a few structural elements are still scattered around the site. The temple must have been thoroughly dismantled very early because none of the travelers reported about it in modern times.

The most important evidence of its existence are coin images from the time of Emperor Philip Arabs. The temple can be seen on it, next to it a Caducaeus, the typical messenger staff of Mercury , and a long flight of stairs leading up the mountain. This outside staircase is still preserved today and is clearly visible from the city.