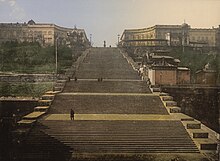 The Potemkin Stairs in Odessa

The outside staircase is usually a representative outside staircase that has no roof. In the narrower sense, only those components are referred to as outdoor stairs that serve to develop a higher building entrance and run axially towards it. In the broader urban planning sense and in the context of landscape architecture , it also means axial stairs to large squares and terraces. In the past, the term was used as a synonym for external stairs.

The decisive characteristics of an open staircase are its location outside a building, its lack of roofs and the fact that it leads vertically to an object to be accessed. The latter means that the flights of stairs are not necessarily perpendicular to the property, but that the symmetry axis of the staircase leads perpendicular to a building facade . This distinguishes an outside staircase from other external staircases. Outside stairs usually lead to a main entrance on the higher ground floor or on the first floor. Their representative function means that they are mostly large, expansive and often multi-flight staircases. Because they run axially towards the building, it is customary for them to be centered in front of the facade, thus emphasizing the symmetry of a building.

Open stairs have been in use since ancient times. You can still find them today on Greek and Roman temples , but also on religious buildings in India and China. There are also steps on the buildings and temple pyramids of pre-Columbian peoples of Mesoamerica such as the Olmec , Zapotec and Maya . Since the Middle Ages they have been preferred in Europe as church and town hall stairs . During the Renaissance and early Baroque periods , the outside staircase was used as a reception room; in town halls, its top landing was also a place for ceremonies . Double and curved stairs were popular in the Baroque era. In the case of castles , the outside staircase was the main entrance to the bel étage until the 18th century . They received a special urban enhancement at the time of classicism and historicism .

One of the largest open staircases of the Baroque era is the Spanish Steps in Rome , which lead from the Piazza di Spagna to the Santissima Trinità dei Monti church . The baroque staircase in front of Girona Cathedral is also well known . It consists of 90 steps, which are interrupted by two paragraphs. The Potemkin Staircase in Odessa , built from 1837 to 1841, was conceived from the beginning as the representative main entrance to the city. At the open-air plays in Schwäbisch Hall , the outside staircase in front of the St. Michael church is the main venue for theater performances and serves as an open-air stage . The Strudlhofstiege , an Art Nouveau outdoor staircase in Vienna , became known in particular as the namesake of a novel by Heimito von Doderer .

Due to their outer layer, open stairs are made of weather-resistant material, usually stone. The selection depends on the location, the resources available and the requirements. Representative or frost-proof stairs are preferably made of suitable natural stone, clinker or concrete blocks today. Round stones, bricks or wood are also used in gardens (for the various materials, see paving ).