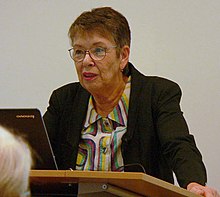 Barbara Schock-Werner , married. Barbara Lochs , (born July 23, 1947 in Ludwigsburg ) is a German architect , art historian , monument conservator and university professor . From 1999 to 2012 she was the master builder of Cologne Cathedral .

Schock-Werner attended elementary school in Bad Cannstatt from 1953 to 1957 and, after completing secondary school , initially completed an apprenticeship as a draftsman as well as a carpenter and bricklayer internship. From 1967 she studied at the National School of Engineering for the construction industry in Stuttgart architecture . During her internship at the Institute for Lightweight Structures at the University of Stuttgart in 1969, the latter was responsible for the planning of the new Olympic Stadium in Munich under the direction of Frei Otto .

After graduating in 1971, Schock-Werner worked in an architectural office with a focus on monument protection . At the same time she studied art history and history at the University of Stuttgart and Vienna, and finally, since 1975, at the University of Bonn . During a nine-month study visit to Alsace , she conducted research on the Strasbourg Cathedral ; In 1979 he married the art historian Kurt Lochs (born October 5, 1932, † December 21, 2018, director of the Germanisches Nationalmuseum Nürnberg ) and shortly afterwards the birth of two children.

1981 Schock-Werner was in art history doctorate , her thesis entitled "The Strasbourg cathedral in the 15th century. Stylistic development and hut organization of a citizen's cathedral ” . Since 1982 taught Schock-Werner at the Academy of Fine Arts in Nuremberg as a teacher, the subjects of art, architecture and design history, in 1989 they appointed the Bavarian State Ministry for Science, Research and the Arts of honorary professor . At the same time, she held lectures on architecture at the Technical College in Stuttgart from 1985 to 1991 . She has also been a member of the board of the German Castle Association since 1989 and has been Vice President since 1995 and was elected President in 2013. From 1992 to 2004, Schock-Werner was chairman of the scientific advisory board of the German Castle Association. and was chairwoman of the Dombaumeister e. V. , the European Association of Cathedral Builders, Minster Builders and Metalworkers.

From 1992 to 1996 Schock-Werner held a professorship at the University of Erlangen-Nuremberg . In the final phase of her habilitation thesis with the title "The buildings in the prince-bishopric of Würzburg under Julius Echter von Mespelbrunn 1573-1617, structure, organization, financing and artistic evaluation" she received the appointment to the office of Cologne cathedral builder in 1998, which she did on January 1st In 1999.

As the head of the Cologne cathedral building administration and the cathedral building works , she managed the total budget of six to seven million euros annually, and was the manager of around 60 employees. As a master builder of the cathedral, Schock-Werner was also a born member of the Central Cathedral Building Association in Cologne . Under their aegis, the Richter window designed by Gerhard Richter was installed in the south transept of Cologne Cathedral in 2007 , after Schock-Werner asked the artist for a design for the new glazing of the 113 m² window.

On November 23, 2012, Schock-Werner was elected by the general assembly as the new chairman of the Cologne regional association in the Rhenish Association for Monument Preservation and Landscape Protection. On April 28, 2013, she was elected President of the German Castle Association to succeed Alexander zu Sayn-Wittgenstein-Sayn . On December 17, 2013, Schock-Werner was appointed to the urban development committee as an expert resident at the suggestion of the SPD parliamentary group in the Cologne city council .

After the major fire in the Notre-Dame de Paris cathedral on April 15, 2019, Schock-Werner was appointed by Minister of State for Culture Monika Grütters to coordinate the numerous aids offered from Germany on April 18, 2019 .