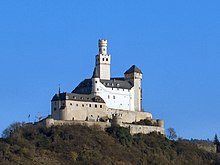 The Marksburg in Braubach , seat of the German Castle Association

The German Castle Association e. V. (DBV) was founded in 1899. It is based on the Marksburg via Braubach am Rhein . The association's own European Castle Institute (EBI) is housed with the castle library and castle archive in Philippsburg Castle in Braubach.

The German Castle Association was founded in Berlin in 1899 as the "Association for the Preservation of German Castles" and was given its current name in 1953. The current subtitle castles, palaces, mansions - preserving, exploring, experiencing was decided at the general assembly in 2016 and describes the essential content of the association's work. The DBV is the oldest private initiative for the preservation of German monuments and has been contributing to the preservation and research of castles , palaces and manors throughout Germany since it was founded .

In 1900 the German Castle Association acquired the Marksburg. It moved its headquarters there in 1931. Philippsburg Castle (Braubach) has also been owned by the association since 1997 .

The first president from 1899–1900 was Heinrich Freiherr von Buddenbrock .
The Berlin architect and founder of the Bodo Ebhardt association was chairman of the association from 1920 to 1945.

From 2013 to 2019 Barbara Schock-Werner was the president of the DBV. Her predecessor was Alexander zu Sayn-Wittgenstein-Sayn , who today also chairs the foundation of the German Castle Association as honorary president. On May 5, 2019, Maximilian Fürst zu Bentheim-Tecklenburg , who previously belonged to the Presidium, was elected her successor. The vice-president is the lawyer and art historian Rüdiger Mertens, the building historian Stefan Breitling was elected as a representative of science and Stefan Köhl, chairman of the Rhineland-Palatinate / Saarland regional group, was elected to the presidium as the new treasurer. Furthermore, Thomas Leibrecht belongs to the executive committee as a private castle owner and as regional group chairman of the LG Baden-Württemberg. The managing director of DBV is Gerhard Wagner . Reinhard Friedrich is the head of the European Castle Institute.

The DBV aims to preserve historical defense and residential buildings as evidence of history and culture through:

The European Castle Institute is a scientific institution of the German Castle Association. V. of "Research into historical defense and residential buildings and [the] dissemination of research results". The institute works closely with other institutes and institutions with the same objectives in Europe. In the last few years the development of the international castle database "EBIDAT" has become an important task.