Family coat of arms of those of Buddenbrock

Buddenbrock [ ˈbʊdn̩ˌbʁoːk ] is the name of a Baltic noble family, apparently of Hanseatic origin.

The name of the family appears in the years 1383 and 1384, when the merchants Everd, Hermann and Wennemer Buttenbruck , who were involved in the Hanseatic overseas trade, recorded documents in Reval . Gherit Buddenbruck , who probably belongs to the family, appeared in the mid-14th century with a house brand seal that is kept in the Stockholm Museum. The name no longer appears in the Revals Citizens Register, which has been kept since 1409, or in the lists of Blackheads that began later .

The family then appears in a document on April 3, 1415 with Henricus Buddenbrock , who is enfeoffed by the Teutonic Order with possession in the Livonian Luxembourg and with whom the family line begins. From there it soon spread to Courland and Prussia , later to Sweden and Silesia , in the 19th century also to Upper Austria , and finally to Switzerland .

Enrollment in the 1st class of the Courland Knighthood took place on October 17, 1620 for Johann Buddenbrock, in the Livonian Knighthood in 1742 (No. 3), the Swedish nobility naturalization and introduction to the knight's house in the aristocratic class on September 24, 1729 ( No. 1843) for the royal Swedish colonel Heinrich Magnus von Buddenbrock (1685–1743), the baron class in 1731 (no. 209) for the same, now with the rank of royal Swedish major general. 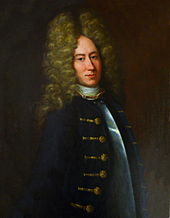 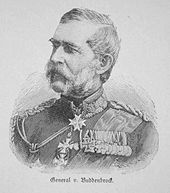 There is also a noble family from Buddenbrock that goes back to the natural children of the royal Prussian major general Ludwig von Buddenbrock with the divorced Baroness Henriette Wilhelmine Juliane Louise von Ochsenstein , née Countess zu Solms-Sonnenwalde .