Fresco in the Camera degli Sposi in the Palazzo Ducale ( Mantua , 15th century) 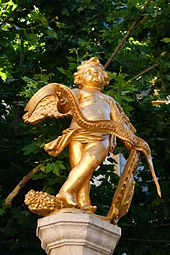 Putto on a fountain in Carpentras (France)

A cherub or Putte , plural: putti or cherubs , is in sculpture and painting a child's shape, which usually little clothed or naked occurs, with or without wings.

The word putto is a borrowing from Italian: putto (plural putti ), means 'little boy' and goes back to the Latin word putillus 'little boy'.

Putti were used for allegorical representations or to repeat a thematic design concept, but often for purely decorative purposes.

From ancient times to the present day they have often embodied gods of love. The special form of Cupids , childlike Eros -Figuren, has been known since ancient Greece. The ancient historian Pierre Grimal considers the winged childish putto to be a Hellenistic synthesis of the Greek Eros and the Egyptian child god Hor-pa-chered (the Ptolemaic Harpocrates). Examples can also be found in Roman antiquity, for example in Pompeii .

In early Christian art, angels are associated with music. Since the 15th century, depictions of child angels, who mostly make music, have increasingly appeared in Christian iconography . It is assumed that the connection between music and youth can also be traced back to ancient traditions.

In his enigmatic master engraving Melencolia I, created in 1514, Albrecht Dürer shows a rather passively inactive putto melancholicus . Four putti can also be seen in his work Die Hexe . In Baroque art , the child angels making music were increasingly stylized as toddler-like putti and, above all, often used in sculpture. In some churches, but also on profane paintings (e.g. in Venice), there are several hundred decorating altars , organs, railings, cornices, sculptures and frescoes . One of the most famous portrayals of putti are the angels of the Sistine from Raphael's Sistine Madonna in Dresden .

A bared boy on a coat of arms like in Hengelo (Gelderland) is not a putto.

The special form of cupids as a representation of the love god Cupid was also widespread during the Baroque and Rococo .

A putti is the trademark of the Upper Swabian Baroque Route . The best-known is probably the honey sucker in the Birnau pilgrimage church , created by the plasterer from the Wessobrunn school , Joseph Anton Feuchtmayer .

An absolutely rare exception can be found with the sculptor Giuseppe Maria Mazza (1653–1741). As the word Knäblein suggests, it is boys who are depicted as putti. In his Venetian relief Allegory of the Free Arts of Geometry , however, he has framed it by a putto boy and a putto girl.