Plasterer (since RSR in 2006 in Germany), Austria plasterer , is a job title for the interior design and facades make builders and related training occupation. The profession is in southern Germany and Switzerland plasterer called the North German it is cleaner or plasterers . In the official South German journeyman's letter , the term plasterer and plasterer is used . 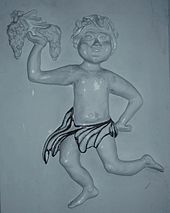 Bacchus figure made of plaster as a relief

Stucco profile template to pull or turn, pivot point in the direction of the pencil tip, without a pivot pin, longitudinal pull is possible, the front profile sheet with the cross-section of the profile, popular as an ornament around lamps or chandeliers

Plasterers plaster walls indoors and outdoors, produce lightweight construction walls and suspended ceilings from plasterboard ( drywall ) and Rabitz . Other important fields of work are the energetic renovation of buildings, for example with thermal insulation composite systems and the removal of mold infestation. Even solar ventilation systems, air-conditioned ceilings, sound insulation and plastered wall surface heating are now planned and installed by specialist plasterers.

The name gives the profession the work with stucco (plastic molding of mortar or plaster on plastered surfaces). This area of ​​activity is still in demand today. Plasterers renovate, produce and process stucco. This job requires good training, a lot of experience and a sure instinct. Stucco parts can be prefabricated in the workshop as well as on site on the construction site. Depending on the place of installation on the building, a distinction is made between interior and exterior stucco. The combination of classic stucco techniques with modern coating techniques and modern design offers suitable implementation options for every building project.

The working materials include: gypsum and various limestones, lime mortar , and various plasters such as cement mortar, cement and clay plaster. Plasterboard, screeds and insulation are also used, among other things .

Traditionally, the job was done by men because it was or sometimes still is physically demanding work. Nowadays the job is made easier by machines and aids and is also suitable for women. In order to learn the profession of plasterer in a training company , you need at least a secondary school diploma . The apprenticeship as a plasterer takes three years in the dual training system and ends with the journeyman's examination . The practical part of the teaching takes place in the company or in inter-company courses and the theoretical part at the vocational school . The training ordinance, which has been in force since 1999, enables training that can be credited. This is how you get a professional qualification as a finishing worker after two years and with a subsequent year of training as a plasterer. After further training to become a master , plasterers can train to become restorers or set up their own business in the plastering trade. →  Major certificate of proficiency . The independent exercise of the learned profession as a journeyman is prohibited by the restriction of trade freedom of the Chamber of Crafts .

As in all construction trades, after passing the journeyman's examination, there is the possibility of further training to become a factory or building foreman , but this does not differ much from the costs of the master craftsman's examination. Since 2008, the master’s title has been recognized as a general university entrance qualification and thus entitles to university studies . The journeyman's certificate together with three years of professional activity entitles you to study at a university of applied sciences . Subjects are, for example, building technology or building construction . Since 2015, applicants with a university entrance qualification have also been offered a seven-semester practical course to become an expansion manager, in which the qualifications of journeyman , master plasterer , building energy consultant and expansion manager can be acquired. The master craftsman's certificate in plastering is classified in the German and European qualifications framework like the bachelor's degree at level 6.

In individual state subject classes, training content in the field of color techniques and color design is increasingly being taught. In the regional associations and guilds organized in the Federal Association for Finishing and Facades, the plastering trades' businesses are advised in all matters on the basis of voluntary membership. The association also directs the stucco plastering drywall federal performance competition, which entitles the plasterers to participate in the WorldSkills .

In Austria, the official designation according to the Vocational Training Act (BAG) is plasterer and drywall builder . Austrian apprentices receive dual training for three years and take the final apprenticeship examination at the end . The training content is based on the job description, taking current developments into account.

After completing the apprenticeship, training to become a foreman or foreman can be completed. The independent professional practice is possible for plasterers in the regulated handicraft of plasterers and drywall builders as well as in the handicraft of heat, cold, sound and fire insulators.

Stucco from the Wessobrunn school in the Kreuzherrenkirche in Memmingen

In the Renaissance , Baroque and Classicism periods , plasterers appear as important designers of predominantly church but also representative secular interiors. They are considered to be artists, as are the painters and sculptors they work with. A unique fusion of wall and ceiling frescoes with stucco and architecture is particularly successful in the Rococo . The trademark of the epoch is a stucco ornament : the rocaille . Often the plasterers themselves are architects , painters or ( plastering ) sculptors at the same time .

The Asam brothers , the brothers Johann Baptist and Dominikus Zimmermann , Joseph Schmuzer and the artist families Carlone and Feuchtmayer are among the most important plasterers in art history .

Plasterers of the 17th and 18th centuries, whose style was influenced by their training or work at the Bavarian Benedictine monastery Wessobrunn , are summarized under the term Wessobrunn School (coined in 1888) .

Plasterers were also the first to be used to create three-dimensional stage sets. Specializations, especially in the field of materials science, later developed into an independent profession, the theater sculptor .

To distinguish it from the handicraft plasterer, Stuckator refers to the plasterer .

in chronological order of the dates of birth

Altar of grace in the Basilica of the Fourteen Saints