Draft for an organ prospectus from the workshop of JG Dirr

Johann Georg Dirr , even Dürr (* 2. April 1723 in Weilheim in Upper Bavaria ; † 9. October 1779 in Mimmenhausen at Salem ) was a sculptor and plasterer of the Rococo , in southern Germany worked.

Johann Georg Dirr was the son of the sculptor Martin Dirr (1674–1733) and the brother of Franz Anton Dirr (1724–1801), the sculptor Philipp Dirr (1582–1633) was his great-great-uncle. He probably completed his apprenticeship as a sculptor with his stepfather Franz Xaver Schmädl (1705–1777). On May 8, 1753 he married Maria Anna Schwägler; In their home town of Stockach , he opened his own sculptor's workshop.

In 1756 Dirr moved to Mimmenhausen near Salem , where he became a partner in Josef Anton Feuchtmayer's sculpture workshop. After Feuchtmayer's death, Dirr took over the workshop in 1770.

In 1756 the daughter Maria Theresa was born. She later married the sculptor Johann Georg Wieland (1742–1802), who continued the workshop in Mimmenhausen after Dirr's death. 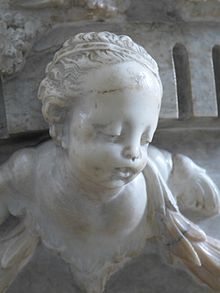 Angel's head from the high altar of the Salem Minster

Dirr's first verifiable artistic work can be found in the Birnau pilgrimage church , where he worked as an assistant to Josef Anton Feuchtmayer . However, he was more artistically influenced by his teacher Schmädl than by Feuchtmayer.

Most of the furnishings in the Salem Minster , the monastery church of the Salem Imperial Abbey, came from Dirr . It was completed in the classicism style by his son-in-law Johann Georg Wieland .

Dirr also designed stucco decor for the Aulendorfer Castle. He created a high altar for the Baindt Monastery .