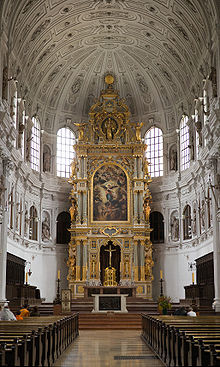 High altar of the Michaelskirche in Munich

The high altar is the elevated main altar in or in front of the apse of a Catholic church. Seen from the main nave of the church, it is mostly at the front in the apse, in old grave churches such as St. Peter's Basilica, but also centrally above the memoria .

Originally the term differentiates the main altar of a church from the side altars or side altars, which were built in addition to the high altar in larger churches from the reign of the Roman Emperor Constantine I and which are located in the side apses, the chapel wreaths , on the walls of the side aisles , on pillars , in side chapels or on the side walls. In churches with a rood screen , an altar in front of the rood screen, which was often called a cross altar , was also common.

In the middle is usually the tabernacle as the place where the holy of holies is kept . In addition, altars used to be differentiated between an epistle page (right) and a gospel page (left). This classification has largely become obsolete after the liturgical reforms of the Second Vatican Council , since the epistles of the liturgy and the Gospel are recited in the ordinary form of the Roman rite at the ambo .

After the Reformation , the high altar was retained in most of the Evangelical Lutheran churches , while the side altars, which appeared to be superfluous, were almost always removed from the church.

In the course of the liturgical reforms since the Second Vatican Council, the high altar was replaced by a popular altar in many Roman Catholic churches or as a decorative end to the apse with the option of continuing to use the tabernacle of the high altar.