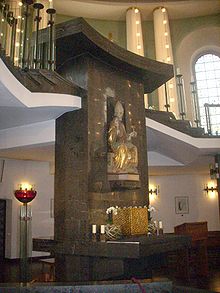 Tabernacle in the altar column of St. Hedwig's Cathedral in Berlin

Access to the tabernacle on the back wall of the high altar of St. Martin in Landshut

Tabernacle with exposure niche in Dietfurt an der Altmühl

The (also the) tabernacle ( Latin tabernaculum "hut, tent") is in Roman Catholic and Old Catholic churches the designation for the storage place of the reliqua sacramenti , the hosts consecrated in the Eucharist , which according to Catholic doctrine are and remain the body of Christ . The tabernacle is usually an artistically designed tabernacle with solid walls and lockable door; it is a place of silent adoration .

The name is a rededication and new coinage of the tent of revelation ( standard translation ) or the tabernacle ( Luther Bible ) of the Tanach , which is named in the Latin Bible tabernaculum testimonii (Latin "tent of [divine] revelation "). In the Hebrew language it is known as Mishkan (משכן, “dwelling”, in the sense of God's home on earth). This was where the commandment tables for Moses (as the holy of holies) were kept and carried along on the biblical wanderings of the people of Israel ; see Mischkan . At the same time, the word in Roman Catholic usage is a anticipatory reference to the “heavenly Jerusalem” (see eschatology ), which is referred to as the “tent of God with the people” (tabernaculum Dei cum hominibus) ( Rev 21.3  EU ).

Location in the church

In Romanesque churches the consecrated hosts, which were kept for the Holy Communion , were kept in a barred niche in the chancel or in a wall tabernacle. In the High Middle Ages, theology and liturgy strongly emphasized the real presence of Jesus Christ in the Holy of Holies and the worship of the incarnate Son of God in the form of bread. It was promoted by a high medieval Eucharist piety determined by the desire to see. The Gothic first developed tower-like sacraments made of ornate stone carving. From the 14th century, the tabernacle was also moved to the altar , where it was installed in the center of the reredos . In the baroque period at the latest, the tabernacle was almost always firmly attached to the altar. As a rule, it should be on the main altar in churches where the Liturgy of the Hours was celebrated (cathedral, collegiate and monastery churches), but on the altar of a sacrament chapel . After the Caeremoniale episcoporum, there was usually no celebration there until the so-called tabernacle decree of June 1, 1957 prescribed this too. The same decree established the old custom that the eternal light on the tabernacle should indicate the keeping of the holy of holies . Only during the Triduum Sacrum is the tabernacle empty, the tabernacle doors are wide open and the eternal light does not burn.

In the baroque era, an exposure niche was formed on the tabernacle - often flanked by two angels - in which the altar cross stood and which received the monstrance when the holy of holies was exposed . A special baroque form is the rotating tabernacle, in which a rotating cylinder is inserted in the tabernacle. This cylinder has one or more niches in which a goblet or a monstrance can be placed. By turning the cylinder, these niches become visible or are hidden inside the housing.

The Second Vatican Council (1962–65), in its Constitution on the Sacred Liturgy , Sacrosanctum Concilium , wanted the “provisions on the [...] noble form of the Eucharistic tabernacle, its place and its security” to be changed. In churches built or rebuilt since then, the tabernacle is usually located in its own side chapel or in the chancel on the side of a stele .