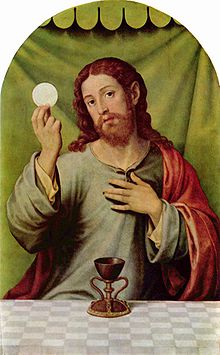 Christ with the figures of the Eucharist, representation from the 16th century

In Christian theology, real presence denotes the doctrine that the body and blood of Christ are truly present in the Eucharist .

Real presence means that Jesus Christ is really present with his body and blood in the substance of bread and wine . The sensually perceptible components ( commercial ) of bread and wine remain unchanged. With the ritual incorporation, the idea of ​​the church as the body of Christ is expressed. Body means the whole person, body and spirit. It does not mean a demarcation from what has been eaten (as would be the victory over a hunted prey with a feast), but a connection with it.

The first approaches to the idea of ​​the real presence go back to Ignatius of Antioch (died in the 2nd century AD), who, referring to the 6th chapter of the Gospel of John, spoke of the bodily presence of Christ in the Eucharist against Gnostic and docetical views defended.

Augustine deepened the understanding of the real symbolic character of the Eucharistic signs and designated the “ sacrament ” as signum, figura, similitudo (“sign, shape, resemblance”) of the reality of Christ.

As a result of changed ways of thinking, especially the departure from the Platonic archetype-copy analogy, the first  supper dispute broke out in the 9th century between Paschasius Radbertus and Ratramnus von Corbie , which broke the controversy between symbolism, i.e. a purely symbolic understanding (with the symbolic relationship two objects unlike in Platonism is no longer understood as "real"), and realism, i.e. a realistic conception of the real presence of Christ, prepared.

However, the tensions did not break through until the 11th century in the Second Supper Controversy. At the center of the controversy was Berengar von Tours , who spiritually understood the real present and wanted to separate it from material gifts.

At the Lateran Synod of 1059, Berengar's teaching was rejected and the real presence affirmed. The Aristotelian-rationalist explanation of transubstantiation by Thomas Aquinas , which soon after his death and his canonization prevailed as the prevailing opinion of theologians and by the Council of , offered an explanatory model for the "substantial" reality of the sacramental presence of Christ, which was already generally assumed at his time Trento was confirmed by the Roman Catholic Church . The spread of nominalism in the late Middle Ages , on the other hand, noticeably weakened the notion of real presence.

In the course of the Reformation , the question of the understanding of the Lord's Supper was raised again and the subject of various internal Protestant disputes, including at the Marburg Religious Discussion in 1529. The real presence was represented by Martin Luther against Ulrich Zwingli and his followers, who taught a symbolic understanding. Zwingli's successor Heinrich Bullinger explicitly referred to Ratramnus for his doctrine of the "ideal presence". The concord formula (SD VII, 35) summarized the Lutheran position 1577 in the statement that the believers consume the body and blood of Jesus Christ "in, with and under" bread and wine, which is often in the sense of a consubstantiation (real Presence of Christ with simultaneous continuation of the bread substance) is interpreted. The Lutheran churches have retained this view and share the assumption of a real presence with the Roman Catholic Church as well as with the Orthodox and Old Catholic Churches; Like Luther, they mainly refer to a predicative (not transferred) meaning of the words of institution (“This is my body”), see also the Leuenberg Agreement

Disputers the Real Presence teach that the elements of bread and wine only characters (Ideal Presence) that Christ's body and blood mean , but do not have , u. a. based on 1 Cor 11 : 23-26  NCC . The Lord's Supper is understood as a symbolic memorial service and is accordingly also referred to as the Memorial Supper . This view is represented by some of the Reformed churches , the Mennonite churches, most of the Baptist churches, the Pentecostal churches , various other Protestant free churches as well as the Jehovah's Witnesses and the Christadelphians .