This article deals with the nave as part of a church building. A ship serving as a church is described under church boat . See also: nave (ship model) .

Three naves in the nave of the Gothic collegiate church in St. Lambrecht Abbey , Styria

Scheme of a classic five-aisled basilica , cross-section. The central nave is higher than the low side aisles.

As naves is called the longitudinal spaces of churches . If a church has several naves, these are separated from each other by partition walls with rows of arcades.

While hall churches have a single nave, churches often consist of several parallel parts of the room, called “ships”, which can have different widths and heights. A basilica is a church whose central nave is higher than the side aisles, with the central nave having its own windows in the upper aisle . A hall church, on the other hand, has naves of the same height, so that the central nave does not have its own window zone, as it does not tower above the neighboring naves. There are also intermediate types from these designs, such as the pseudo-basilica or relay hall, in which the naves are graduated in height, but do not have a window zone as in a real basilica. As a pilaster church is called Saalbauten where wall-bound pillars protrude from the walls here in the interior of the church so that arise along the side walls between the pillars individual parts of space. In the case of a central building , there is usually no talk of a ship.

Central nave and side aisles

The nave or nave is the middle building and usually the widest, highest and longest of the church. This part is mostly intended for those attending the service . The nave Information provided by columns or pillars separate rooms, are as aisles and aisles or deprecated as Abseite referred. All of these structures together are also called the nave . The choir and transept of a church can also consist of several naves. The partition walls between the central nave and the aisles and between the side aisles are called partition walls , which are usually dissolved with arcades .

If the building plot allows, the nave is usually built in a west-east direction and the choir is oriented to the east - as a symbol of the New Sun or the resurrection of Christ . The semicircular end of the nave behind the choir is called the apse .

The second floor above aisles is called a gallery or grandstand .

Late Romanesque town church in Treffurt: the main and transept form a cross

The cross-ship or cross-house (also Transept ) denotes the extending in a perpendicular position to the nave shorter ship. This is usually created in front of the transition to the choir and thus forms a cross shape in the floor plan. Several transepts are also rarer, with the floor plan showing a cross with a corresponding number of transverse beams. At the Abbey Church of Cluny III there was a small and a large transept, a complex that is also common in the English Gothic. West transepts have only been built occasionally. The point where the nave and transept meet is called the crossing . In the exterior of the church, this point is often marked by a roof turret or a crossing tower. The two ends of the transept leading from the crossing are also called cross arms. In the basilicas of late antiquity and the early Middle Ages, the transept runs through as a separate room part and separates the nave from the apse. There is no crossing ( Roman transept ).

The nave is part of the central nave of the Basilica . It is located above the arcades in the area of ​​the upper storeys . 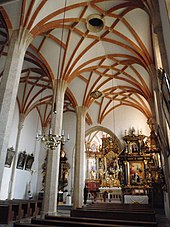 Two-aisled interior of the parish church of St. Oswald-Möderbrugg , Styria

The German dictionary of the Brothers Grimm leaves open whether it is about the metaphor ship (for example in the sense of the ark that saves from perdition ) or the early adoption of ancient Greek ναός or νεώς ( naós or ne „ s "temple, temple space") in the medieval Latin and its confusion with ancient Greek ναῦς ( naus "ship"). In any case, the Latin name navis ("ship") has been used for the central assembly room of the faithful in the church since the Middle Ages. In classical Latin it was not customary to designate an architectural space as navis ; however, the ship metaphor for the state and the civil society occurs more often in antiquity.

The last-mentioned biblical story was taken up very early by Tertullian (born around 160 in Carthage, died after 220 ibid) in his work De Baptismo (chap. 12) and brought it together with the concept of the church. Alluding to the rescue of Peter, whose walk failed, he describes the little ship in which Jesus and his disciples sailed on the Sea of ​​Galilee as a symbol of the Church.

Against the background of the persecution situation in the first centuries, this interpretation is obvious. Just as the ship that carries Jesus and his disciples is shaken by the waves and seems to be at the mercy of destruction, so it is in the first centuries of the Church, which suffered more and more from persecution and internal battles. It is assumed that Tertullian's interpretation of the story was also influenced by the hope that an event corresponding to the outcome of the biblical story might also occur in the future. As the troubled sea, obeying the words of Jesus, smooths out again, a state of peace between the Roman state and the Church should replace the situation of persecution.