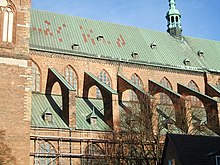 Obergaden at the Stralsund Nikolaikirche

In contrast to the basilica, the central nave of a hall church has no upper cladding and is lit from the windows of the side aisles. If the upper aisle is clearly formed but windowless, one speaks of a pseudo-basilica . In (other) relay halls , the central nave also rises higher than the side aisles, but there are no or hardly any walls above the arcades. 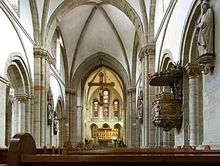 Osnabrück Cathedral , warrior of the vaults at the base of the upper aisle, neither triforium floor nor gallery

St. Lorenz in Kempten from the outside

The top arcade can be designed very differently. In addition to the difference in height between the nave eaves and the aisle roofs, what is important is the height of the central nave vaults in relation to the aisle roofs and upper aisle windows.

The upper storey towers above the farm buildings of the Middle Ages, the Gaden built on the church wall (also: Gadem , 'Verschlag', 'Schuppen', 'Haus'), and therefore receives its name, which it also retains in the later multi-nave church buildings move the extensions further away from the main nave. By the way, free-standing churches have only been in use since the middle of the 19th century; in medieval urban planning, the churches were permanently enclosed.