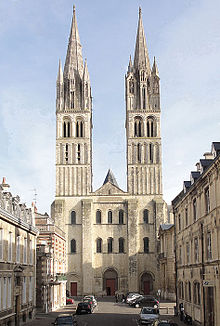 Facade of the abbey church

St-Étienne, view from the southeast of the apse and the adjacent monastery building

The former Benedictine abbey with the monastery church of Saint- Étienne was donated by William the Conqueror in Caen , built from 1060, but probably not completed until after 1090. From 1120/25, the originally flat-roofed building was built with six-part ribbed vaults , which are among the oldest in France. St-Etienne is considered together with its counterpart, the same time of Matilda of Flanders donated convent of Sainte-Trinité in Caen, as an architectural highlight of Norman architecture and Vollendungsbau the Romanesque . Both buildings were groundbreaking for the architecture of the Île de France and are regarded as pioneers of the Gothic . Saint-Étienne in particular was the normative for Norman architecture in England.

After the monks were expelled during the French Revolution, the monastery initially served as a grammar school and is now the Hôtel de Ville (town hall) of the city of Caen . The Saint-Étienne abbey church was converted into a simple parish church. The church and outbuildings have been classified as Monument historique since 1840 .

The founder William the Conqueror was buried in the abbey church of Saint-Étienne.

In 1060, William the Conqueror founded the Benedictine abbey as a penance for the marriage with his wife Mathilde von Flanders, which the Pope had contested . Construction of the abbey church began in 1065/66 at the eastern end. The inauguration took place in 1077 under the first abbot Lanfrank von Bec from Pavia, who was appointed Bishop of Canterbury in 1070, as well as six other bishops of Normandy. The facade towers were finished in the last decade of the 11th century. From 1120/25 the former wooden ceiling in the nave was replaced by a six-part ribbed vault . The conversion of the original staggered choir into a Gothic gallery choir began around 1200 . Also in the 13th century the Gothic pointed helmets were added to the Romanesque west towers.

Due to the neglect of the monastery during the wars of religion, the crossing tower collapsed in 1566.

From 1599 to 1604 the church was rebuilt while preserving the medieval structure. Further restorations took place in the 19th century.

Saint-Etienne de Caen is now a three-aisled basilica with a transept and crown chapels. It is 110 meters long and made of Caen stone.

In the west there is a double tower facade , which is divided into eight zones. The lower part consists of a base, three portals with cornices and two rows of windows with round arches. The towers start from the glare windows, followed by a sound window zone, a bell storey, a window zone with biforias and a polygonal spire with pinnacles. What is new is that the towers connect directly to the facade.

The outer facade of the rest of the building is in three parts, with the gallery and chapels bypassing the choir as a closed component. The four choir flank towers and the lantern tower in the choir complete the building.

The long choir in the east was not added until the 13th or early 14th century. It has a 7/14 finish, is provided with a gallery and has seven wreath chapels. Its central nave, the high choir, has a pointed arch.

In the crossing of the nave and transept , the church space rises one floor up into the square lower floor of the crossing tower, but not into its octagonal upper floor.

The elevation, which is divided into an arcade zone, gallery and upper storey, is typically Gothic. The ribs of the vault connect in the upper storey to serve, these services in turn develop into bundle pillars in the arcade floor and thus give the vault sufficient support.

Starting from Saint Etienne, the western double-tower facade and the gallery vault with half a ton developed into decisive elements of Anglo-Norman architecture. 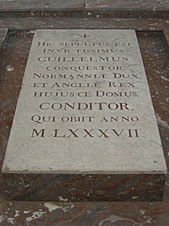 Grave of William the Conqueror

William the Conqueror, died on September 9, 1087, was buried in Saint-Étienne. As a memorial, his son Wilhelm II placed a marble grave slab with a reclining figure ( Gisant ) of Wilhelm in the center of the choir. In 1562/63 Calvinists destroyed the tombstone. The bones were thrown away, but a monk saved the leg bones. The grave, which was destroyed again during the French Revolution, was restored in 1802 and provided with a simple grave plate. On the plate is an inscription in Latin that reads: "Here lies the invincible William the Conqueror, Duke of Normandy and King of England, the founder of the house, who died in 1087".

The altar can be reached via three steps and is made of white and red marble. The bas-relief in the center of the altar is made of gilt bronze. The copy of the relief made in 1588 that can be seen today was made in 1840.

The large organ was built in 1882–1885 by the organ builder Aristide Cavaillé-Coll. The instrument has 50 stops on three manual works and a pedal . The playing and stop actions are mechanical.

The choir organ was built in 1992 by the organ builder Dupont. The instrument has 15 stops on two manuals and a pedal. The actions are mechanical.