An octagon (also octagon or octagon, from Latin octogonum, octagonum, octagonon, from Greek ὀκτάγωνον oktágōnon ) is a geometric figure and a polygon ( polygon ) with eight corners and eight sides. Octagons, like all polygons that are not triangles , can be divided into convex, concave and overturned octagons. In variations of this will be described in detail and illustrated after that, the regular octagon in detail.

The octagon can be represented as: 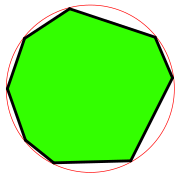 There is only one regular eight- ray star , also called an eighth star or octogram .

The "stars" with the symbols {8/2} and {8/6} are squares . If you place these two squares with their axis and diagonal lines on top of each other and then turn them by 45 ° relative to each other, see the white triangles in the star, you get an octagon .

Divide the regular octagon into 8 isosceles triangles . The angle enclosed by their legs is 360 ° / 8 = 45 °. The two base angles of the triangle are each 67.5 °. The height bisects the isosceles triangle. By drawing in the height, a right-angled triangle with the angles 67.5 °, 22.5 ° and 90 ° is created. The following approaches are based on this right-angled triangle, where:

The radius of the inscribed circle is given:

The leg you are looking for (opposite cathetus to the acute angle) can be determined using the tangent of 22.5 °:

The length of the sides of the octagon is given:

Analogous to the above consideration, the radius of the inscribed circle can be determined with the help of the tangent of 22.5 °, let it be half of :

If you put in the formula for the total area, you get

The radius of the perimeter is given:

The ratio to corresponds to the sine of the acute angle :

The radius of the inscribed circle is

If you put in the formula for the total area, you get

or with the addition theorems for the trigonometric functions

With a given radius

Construction of a regular octagon with a given circumference

Octagon, constructed of a square, circle diameter by diagonal specified

You can construct a regular octagon by constructing the symmetry axes of a square using the perpendiculars and connecting their points of intersection with the circumference , with the corners of the square.

The animation below shows an alternative.

For a given side length

Construction of a regular octagon with a given side length, see animation.

The construction is almost the same as that of the regular hexagon with a given side length .

First, the two end points of the side length are denoted by and . Both are corner points of the resulting octagon. This is followed by an arc with the radius around the point and a second with the same radius around the point , resulting in the two intersection points and . It continues with the half-line from through and drawing a parallel to from the point that the arc around in cuts. Now the point is connected with, creating the point of intersection . Then the half-line is drawn through , cutting the half-line in . Thus the center of the resulting octagon is determined. The second half straight through leads to the central angle . After drawing in the circumference around and through , the corners and the octagon result. Now remove the two missing side lengths on the circumference, they result in the corners and , and finally connect the neighboring corners to a finished octagon.

Some polyhedra have regular octagons as side faces , for example the truncated hexahedron and the large rhombic cuboctahedron . The polyhedra mentioned are Archimedean solids .