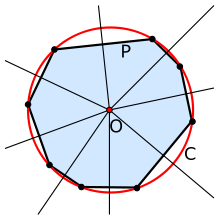 In plane geometry , a perimeter is a circle that goes through all corner points of a polygon (polygon).

Such a perimeter does not exist for every polygon. In general, a convex polygon has a perimeter if and only if the perpendiculars of all sides intersect at a point. In this case the common point is the center of the perimeter.

Perimeter of a triangle

Triangle with vertical lines and perimeter

The perimeter is particularly important in triangular geometry . Each triangle has a perimeter, as explained below.

All points of the perpendicular to are from and equidistant. Correspondingly, the points of the median perpendicular have to be equal distances from and . The point of intersection of these two perpendicular lines is therefore the same distance from all three corners ( , and ). It must therefore also be on the third vertical line. If you draw a circle around this intersection that goes through one corner of the triangle, the other corners must also lie on this circle.

The center of the circumference, i.e. the point of intersection of the vertical lines, is one of the excellent points of the triangle. He bears the Kimberling number .

or calculate from the triangular area:

Here are the names , , for the side lengths and , , for the sizes of the interior angles . denotes the area of the triangle, which z. B. can be calculated using the Heronic formula .

result in the Cartesian coordinates of the circumcenter

The statement, the center perpendicular to the sides of the triangle that intersect at a point, in the synthetic geometry as a means solders set called. There it can be shown for more general affine planes, in which no concept of distance and therefore no "circles" are defined, that this sentence is equivalent to the theorem of height intersection . → See also the vertical intersection and the pre-Euclidean plane .

While there is always a circumference with a triangle, this only applies in special cases to polygons with more than three corners.

Squares that have a radius are cyclic quadrilateral called. Special cases are isosceles trapezoids , including rectangles and squares .

Regardless of the number of corners, every regular polygon has a perimeter. The following applies to the perimeter radius of a regular corner with the length of the side :

If the definition of the circumference is transferred to (three-dimensional) space , one obtains the concept of the sphere , i.e. a sphere on which all corner points of a given polyhedron ( polyhedron ) lie.