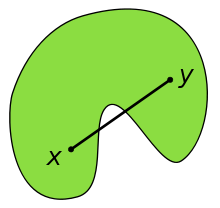 In mathematics , a geometric figure or, more generally, a subset of a Euclidean space is called convex if for any two points that belong to the set, their connecting line always lies entirely in the set. This guarantees that the set has no ( concave ) indentation at any point .

The theory of convex sets founded Hermann Minkowski in his work geometry of numbers , Leipzig 1910. find application for convex sets. B. in convex optimization or computer animation , where convex polytopes are easier to handle than non- convexes in several respects.

A subset of a real or complex vector space is called convex if for all and for all with always holds:

This definition is based on the parameter representation of the connection between and :

In fact, the above definition also includes objects with straight edges, such as squares , which colloquially would not necessarily be called convex . 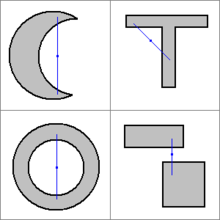 Examples of non-convex figures of the plane

The convexity of a set is stable under certain operations. Examples are:

again convex. Similarly, the archetype of a convex set is again convex under this function.

Convex sets can be further restricted in several ways:

A point of a bounded, convex set is called diametrical for M if is equal to the diameter of . In the unit sphere, exactly the edge points, i.e. the vectors of length 1, are diametrically opposite. For a segment in a normalized space, the end points of this segment are exactly diametrical. In these two examples there are always non-diametrical points. This is considered a "normal" property and defines:

A bounded, convex set has normal structure if every closed and convex subset it contains with at least two points contains non-diametrical points with respect to .

In general, considerably weaker prerequisites for the geometry that apply to are sufficient for a meaningful definition of convexity . From Hilbert's system of axioms of Euclidean geometry, one only needs the axioms of connection and those of arrangement. The convexity depends in particular on the definition of a straight connection path. The half-plane defined by is convex in the Euclidean plane , but non- convex in the Moulton plane : For example, the “straight line” runs between and over the point (not included in the set) . See also collinear .

Depending on the mathematical context, different generalizations are used, some of which are not coherent.

The following axiomatic generalizes the fundamental properties of convex sets on a level comparable to that of topology .

A set together with a set of subsets is called a convexity space if :

Then the sets from are called the convex sets of .

A circle is metrically convex, but as a subset of Euclidean space, it is non-convex.

A metric space is called metrically convex if there is always a third point for every two different points such that the triangle inequality is even equal:

From a point which satisfies this condition one then says:

A submanifold a Riemannian manifold is geodetically convex if any two points by a curve in can be connected to an in length minimizing global geodesic is.

A function is convex if and only if its epigraph , in this picture the green set above the blue function graph , is a convex set.

In two-dimensional , the curvature of a continuously differentiable curve can be examined at a point in relation to the viewer:

Corners are called convex if all interior angles are at most 180 °.

Similarly, the curvature of hyperplanes can be investigated in higher dimensions , but for this purpose the object must be orientable .