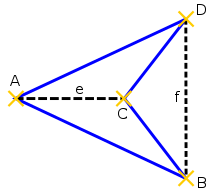 A dragon square (also dragon or deltoid ) is a flat square ,

Both definitions are equivalent.

Often, only which is convex form of the deltoids called kite quadrilateral and the concave shape as arrow square or wind bird quadrilateral . The name dragon square refers to the shape of many kites .

A special dragon square is the rhombus . It is an equilateral deltoid .

The following applies to every dragon square (see illustration):

For every convex dragon square the following applies:

A tangent square is a dragon square if and only if one of the following conditions is met:

A square is a crooked kite if it can be broken down into four equal triangles from an inner point with straight connections to the four corners .

Some polyhedra have kite quadrilaterals as faces . The surface of the deltoidal icositetrahedron and deltoidal hexacontahedron , two Catalan solids , consists of congruent dragon squares.

The rhombohedron , the rhombic dodecahedron, and the rhombic triacontahedron even have diamonds as side faces . The polyhedra mentioned are rotationally symmetrical , ie they can be mapped onto themselves by rotating about certain axes of rotation .