Figures with their axes of symmetry (dashed). The figure at the bottom right is not axially symmetrical.

Axial symmetry is the mirror-image arrangement of characters on both sides of an imaginary line. In the geometry are axial symmetry or axial symmetry similar designations that property. A figure is called axially symmetrical if it is mapped onto itself by the vertical axis reflection on its axis of symmetry .

A plane figure F is called axially or axially symmetric if a straight line g can be specified in its plane so that F is converted into itself by mirroring at g.

The straight line g is then called the axis of symmetry . 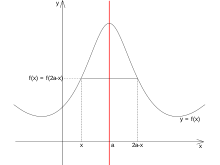 Function whose graph is axially symmetric to the line x = a

A task that is particularly popular in school is to prove the axis symmetry for the graph of a function . If the y-axis of the coordinate system is the axis of symmetry, it must be shown that the equation

is fulfilled for all x of the domain . Then the graph of the function is said to be symmetric about the y-axis. Such functions are also called straight functions . This condition states that the function values ​​of the arguments and must match.

If you want to examine the axis symmetry of a function graph with respect to any straight line parallel to the y-axis with the equation , you have to test whether the function matches the equation

for a fixed and for all of the definition met. Substituting with gives the equivalent condition

The quadratic function serves as an example

The graph (a parabola) is therefore symmetrical about the y-axis.

An example of a function will now be given whose graph is not symmetric about the y-axis, but is axisymmetric. The function

is one such example. The claim is that the graph of is axially symmetric with respect to the normal . So it is true and it follows from it

This confirms the assumption of axial symmetry.

In general, the graph of a quadratic function is axisymmetric with respect to the vertical line through the vertex . This is easy to see if you paraphrase the function term in vertex form .

Another generalization of the axial symmetry to 3-dimensional space is plane symmetry. A figure is precisely symmetrical, if there is a plane so that at mirroring this, the figure is mapped onto itself.