A trapezoidal ( latin trapezium of ancient Greek τραπέζιον trapézion , diminutive of τράπεζα trapeza "table", "four legs") is in the geometry of a planar quadrilateral with two parallel mutually facing sides. 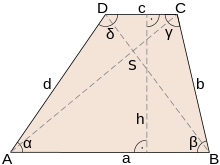 Trapezoid with corners A, B, C, D,
sides a, b, c, d
and angles α, β, γ, δ.
The following are shown with broken lines:
the height h and
the diagonals AC and BD of the trapezoid and their intersection point S.

The height of the trapezoid is the distance between the two parallel sides.

A trapezoid is either a convex or an overturned square . Overturned trapezoids are usually not counted among the trapezoids.

The formula for calculating the height from the side lengths can be derived from the Heronian formula for the triangular area . The relationships for the diagonal lengths are based on the cosine law .

The first characterization also formally includes parallelograms , which are sometimes - if not explicitly - excluded. The last two characterizations are equivalent and in this case the isosceles trapezoid is also called a symmetrical trapezoid because of the axis symmetry . The interior angles are therefore the same on both parallel sides. The two diagonals are the same length in the symmetrical trapezoid.

A trapezoid that has two of the properties right-angled, point-symmetrical (parallelogram) and axis-symmetrical also automatically has the third and is therefore a rectangle. 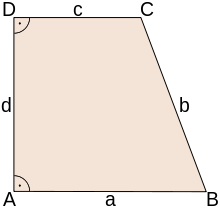 In the case of an overturned or crossed trapezoid , it is not the ends of the base sides on the same side that are connected by the other sides, but the opposite sides. So these sides cross in the center of the trapezoid. An overturned trapezoid can be imagined as the square that is formed from the base and the diagonals of a convex trapezoid. The two faces are triangles that are similar to one another . Overturned trapezoids are usually not counted among the (normal or "real") trapezoids.

The area of ​​the crossed trapezoid, i.e. the sum of the areas of the two triangles , is calculated as follows:

Overturned or crossed trapezoids, which are also at right angles, are used in geodesy to calculate surface areas , for example from orthogonal recordings . They consist of two right triangles that touch at one corner . The difference between the areas of the two triangles results in

with . This area is signed. This means that case distinctions are no longer required when calculating areas using the Gaussian trapezoidal formula if a peripheral side of the area intersects the reference line.

The restriction of the term to quadrilaterals with two parallel sides is relatively recent. Until the beginning of the 20th century, a trapezoid was usually a square in which no pair of sides was parallel, i.e. an irregular square without special properties. For the trapezoid with two parallel sides, the designation parallel trapezoid was common. This use was derived from Euclid's classification of the quadrilaterals, whereby the latter did not consider a quadrilateral with a parallel pair of sides separately, but counted it to the quadrangles without special properties. That is, the trapezoid in Euclid included both the trapezoid and the parallel trapezoid in the above sense. Euclid's exact classification was as follows:

In contrast, Proklos , Heron and Poseidonios used the term trapezoid in the modern sense, i.e. for the parallel trapezoid . They called the irregular square a trapezoid ( τραπεζοειδῆ ). This distinction (Engl. Trapezoidal trapezium ) and trapezoid are there so in German and British English. In American English, the terms trapezium and trapezoid are confusingly used in reverse.

Most medieval mathematicians from Boethius onwards adopted Euclid's use of the term as an irregular square . The distinction according to Poseidonios was only rarely taken up again. They have only been found more frequently since the 18th century, e.g. B. Legendre and Thibaut . Jean Henri van Swinden used the term "trapezoid" in Euclid's sense and called the square with two parallel sides parallel trapezoid .