A right triangle is a triangle with a right angle .

The longest side of a right triangle is called a hypotenuse . It is opposite the right angle .

Each of the two shorter sides in a right-angled triangle is called a cathete (from the Greek káthetos , the lowered, plumb line). So the cathets are the two sides of the right triangle that form the right angle . With respect to one of the two acute angle (in the sketch ) of the triangle, a distinction is adjacent leg of this angle (the angle the accompanying cathetus) and the opposite side (the opposite to the angle cathetus).

Construction SWW case, given are hypotenuse and angle 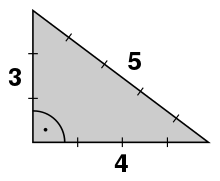 A right triangle is completely determined by three defining pieces: the right angle, a side, and another side or angle.

Arrange the cathetus perpendicular to the cathetus . The distance gives the missing hypotenuse and thus the triangle .

In the right triangle , the heights and are equal to the cathetus or .

For the short sides and applies , therefore . Adding results to , so . According to the Pythagorean theorem , it follows from this and the inequalities

The right inequality is a special case of the inequality of the arithmetic and geometric mean .

Division of by the left inequality gives . Because of this it follows

From follows from , , for the reciprocals so . Multiplying by on both sides gives . Because of this, the more precise inequalities follow

The equations and apply if and only if , i.e. for a right-angled and isosceles triangle with the interior angles , and .

As can be seen from the picture, of the four "classic" marked points in the right-angled triangle, the height intersection (light brown) lies directly in the vertex of the right angle, corner point , and the center of the circumference (light green) in the middle of the triangle side, the center of gravity (dark blue) and the inscribed center (red) are inside the triangle.

The center of the Feuerbach circle (both light blue) is in the middle of the line and also within the triangle. On the Feuerbach circle there are nine excellent points , of which, however, only five can be seen due to the position of the height intersection . These are the side centers and as well as the height base points and two of the three centers of the so-called upper height sections , namely and lie on the side centers or The corresponding third center point is on the vertex Finally, the third height base point is found on the height intersection

The designations of the marked points and their positions are comparable to those of the acute-angled triangle .

The points , , and are, as with all triangles on the Euler straight (red).

Right-angled triangle with the four "classical" excellent points , , and in addition, the center of the Feuerbach circle with its nine excellent points (of which only five visible), and the Euler's line

The sentence was only formulated in 1991, " but it is certainly much older ".

Fig. 2: Proof by means of the circular angle theorem

“ The bisector of the right angle of a right triangle divides the hypotenuse square into two congruent surfaces . "

A) Proof by symmetry, Figure 1, both the geometric proof by supplementing it for the Pythagorean theorem .

B) Approach for an alternative proof, Figure 2:

This confirms that the two triangles and are congruent, so the quadrilaterals and have the same area.