A non-convex pentagon with an interior angle greater than 180 °

In a triangle, the sum of the interior angles is always α + β + γ = 180 °. The two blue and red angles are step or alternating angles on parallel straight lines and are therefore the same size.
→ Main article : Sum of angles

Therefore all interior angles measure in an equilateral triangle , in a square and in a regular pentagon . However, these statements no longer apply in non-Euclidean geometries . In an elliptical geometry , for example on a spherical surface , the internal angle sum is always greater than in Euclidean geometry, in a hyperbolic geometry , for example on a saddle surface , it is always smaller. 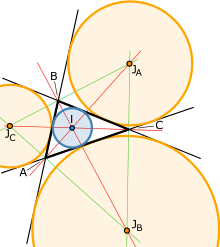 The bisectors of the interior angles of a tangent polygon , for example a triangle or a diamond , meet in the inscribed center of the polygon.

In a triangle, each interior bisector divides the opposite side in relation to the two adjacent sides. It also cuts the bisector of the two non-adjacent outer angles in the center of the circle on the opposite side.

In equiangular polygons, Viviani's theorem applies , according to which the sum of the distances from any point inside the polygon to the sides of the polygon is independent of the position of the point.