The title of this article is ambiguous. Further meanings are listed under Polygon (disambiguation) .

A polygon (from ancient Greek πολυγώνιον polygṓnion 'polygon'; from πολύς polýs 'much' and γωνία gōnía 'angle') or polygon is a flat geometric figure in elementary geometry that is formed by a closed line .

A polygon is a two-dimensional polytope .

A polygon is obtained by (non-collinear) in a plane at least three different points by stretching are bonded together. This creates a closed line ( polygon ) with as many corners , for example a triangle (3 points, 3 lines) or a square (4 points, 4 lines).

The enclosed area is often referred to as a polygon, as in planimetry .

A polygon is a figure defined by a tuple of different points.

Sometimes further conditions are required for the definition of a polygon, but they are not formally necessary: 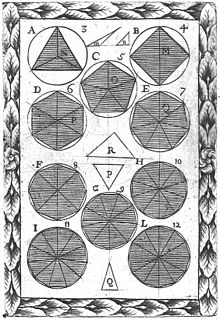 By number of corners

Polygons are typically named after the number of corners (weight of the polygon).

Overturned polygon
If the edges intersect (touch) not only at the corner points, the polygon is referred to as overturning . If there is no self-intersection, the polygon is called simple .

Polygons can be equilateral or equiangular :

Star polygon
Planar overturned regular polygons are also known as star polygons because of their appearance .

In addition, if all the inside and outside angles are the same, then these have the value

For polygons that are not crossed over, the following considerations apply when calculating the number of diagonals:

So a corner that is not overturned has exactly diagonals. In the case of a non-convex polygon, there are diagonals outside the polygon (in the area of ​​a truncated interior angle).

If the corner points of a flat simple polygon are given by Cartesian coordinates , the perimeter of the polygon can be determined by adding the side lengths calculated using the Pythagorean theorem :

If the corner points of a flat simple polygon are given by Cartesian coordinates , the area of ​​the polygon can be calculated according to the Gaussian trapezoidal formula:

Here, the indices that are greater than are always considered modulo , i.e. what is meant by:

In determinant form, the Gaussian trapezoidal formula is:

In addition to the Gaussian trapezoidal formula, the area of ​​a polygon can be calculated using a signed sum of the areas of triangles that are formed with the edges of the polygon as the base and a fixed point (e.g. the point of origin) as the apex. The areas of the triangles with a base facing away from the fixed point (as the edge of the polygon) are given a negative sign.

The area of ​​lattice polygons whose corners are all on one lattice can be calculated with Pick's theorem .

In computer science , important approximations of complex polygons are the convex hull and the minimally surrounding rectangle . In algorithms, a possible non-empty intersection with another geometric object is often first tested (or this is excluded) on the basis of the approximation, only then is the entire polygon loaded into memory and an exact intersection is calculated.

In 3D computer graphics , in addition to other methods of geometric modeling, any (including curved) surfaces are modeled as a polygon mesh . Triangle meshes are particularly suitable for the quick display of surfaces, but they cannot be interpolated as well using subdivision surfaces . There are a number of known data structures for storing polygonal networks.

Regular polygons are often used as a floor plan in architecture. Well-known examples: