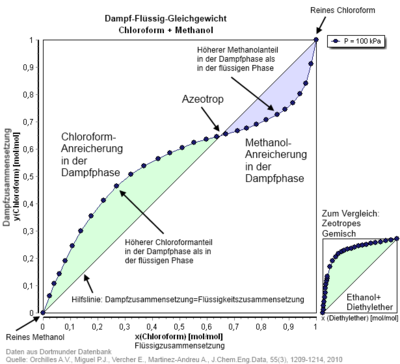 An azeotrope or azeotropic mixture ( Greek a- “not”, zeo- “boiling”, tropos “turning”, here in the sense of “change”) is a liquid consisting of two or more chemical compounds whose vapor phase has the same composition as the liquid phase. The mixture has a constant boiling point and cannot be separated by simple distillation ; so it behaves like a pure substance . Azeotropy is the opposite of zeotropy .

Substances that are very similar to each other, such as the different alkanes , do not form azeotropes and can be separated cleanly by distillation. Mixtures of heavy and light water can also be separated by distillation via a column with a corresponding number of trays, despite the small distance between the boiling points.

There are two different types of azeotropes:

In the case of components that do not completely dissolve in one another, there may be an azeotrope in the miscibility gap. In this case it is called a heteroazeotrope. In the event that the azeotropic composition is in the miscible range or the components can be mixed as required, this is referred to as a homogeneous azeotrope. 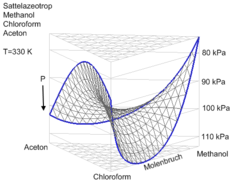 A saddle azeotrope occurs only in ternary and higher mixtures. It is characterized by the fact that the ternary (or higher) azeotrope lies between the boiling points of the pure substances and thus forms neither a pressure maximum nor a pressure minimum azeotrope.

A typical example is the ternary mixture of chloroform , methanol and acetone . The ternary azeotrope is included

The term “saddle azeotrope” is derived directly from the shape of the three-dimensionally drawn vapor-liquid equilibrium.

Since azeotropic mixtures consist of components with very different properties (see above), they can usually be easily separated using other common separation methods besides distillation. Examples would be chromatography , addition of suitable molecular sieves or drying agents such as magnesium sulfate , crystallization of a component at low temperatures. The composition of the azeotrope can be changed in the desired direction by changing the pressure.

When an ethanol-water mixture is distilled several times, an azeotrope of approx. 96% ethanol and 4% water is obtained, which cannot be further separated by distillation and which boils at 78.17 ° C.

However, this azeotrope can be separated by adding a third component. When benzene is added, the water-ethanol mixture forms an azeotrope with three components (a ternary azeotrope ) that boils at 64.9 ° C. This water-benzene-ethanol mixture can now be distilled off and the water can thus be gradually dragged out of the liquid phase. What remains is a mixture of benzene and ethanol, from which the benzene can be separated off by normal distillation, so that anhydrous ethanol is obtained.

Another way to separate an azeotropic ethanol-water mixture is vapor permeation. The mixture is evaporated and passed through a membrane unit. The membrane works like a filter, i. In other words, their pores only allow one component to pass through - here the water. The driving force for the separation of the mixture is a pressure difference between the interior and the exterior and the selectivity of the membrane. Thus the water passes through the membrane (permeate) and the anhydrous ethanol remains on the other side of the membrane (retentate). So you can get ethanol with a purity of up to 99.97%.

In contrast to vapor permeation, in pervaporation the liquid mixture is led past the membrane.

The formation of azeotropes can be used to “drag out” a substance from a mixture. For example, in chemical reaction engineering, toluene is often used as an entrainer to separate water from a reaction mixture . Toluene forms a minimum azeotrope with water. The two liquids separate again in the condensate and form two phases. The toluene, the upper phase, is fed back into the reaction through a water separator . The water is separated off and the course of the reaction can be observed on the basis of the amount of water formed.