The Raoult law of François Marie Raoult is a linear approximation for the vapor pressure of liquid mixtures . According to this, the partial pressure in the gas phase for each component of the mixture is given by the product of the mole fraction of the component and the vapor pressure that the substance would have in its pure form. 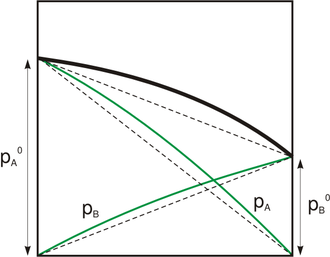 Vapor pressures p A and p B (green) and total pressure (black) over different mixtures of two chemically similar substances A and B. In the horizontal direction, the molar proportions are plotted: left is x A = 1 and x B = 0, right is the other way around. The dashed courses correspond to Raoult's law.

In the case shown on the right, the total pressure is only slightly higher than calculated according to Raoult's law. Most real mixtures show a behavior that deviates more strongly upwards or downwards.

with partial pressures , vapor pressures of the pure substances and substance quantities for