The vapor pressure is the pressure that is established when a vapor with the associated liquid phase is in thermodynamic equilibrium in a closed system . The vapor pressure increases with rising temperature and depends on the substance or mixture present. If the vapor pressure of a liquid in an open system is equal to the ambient pressure, the liquid begins to boil .

The graphic shows schematically how particles change from the liquid phase to the gaseous phase and vice versa due to their vapor pressure. The proportion of particles that go into the gas phase is usually greater because they can be distributed in space.

Substances can occur in the three classic physical states solid, liquid and gaseous. If a substance exists in parallel in gaseous and liquid phase , the gas phase is called vapor . So the vapor pressure is the pressure in a multiphase system.

If there is no liquid phase, but only a gaseous phase, it is not a question of a vapor pressure, but a partial pressure - in the case of only one component in the gas phase, this is equal to the gas pressure .

In physics and chemistry, vapor pressure denotes the partial pressure of a gas (multi-component system) that is in thermodynamic equilibrium with its liquid or solid phase ; it can be calculated using Raoult's law . In the one-component system, this pressure is called the equilibrium pressure. 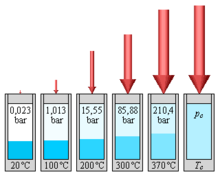 Vapor pressure of water: If water and water vapor are heated in a closed container, the pressure rises sharply with the temperature, and the properties of liquid and vapor become more and more similar, up to the critical point at T c = 373.946 ° C and p c = 22.064 MPa liquid and vapor can no longer be distinguished.

If water and water vapor coexist in thermodynamic equilibrium, the pressure is a pure function of the temperature:

As the temperature rises, the vapor pressure and vapor density rise sharply, while the density of the liquid decreases. The properties of water and steam become more and more similar with increasing temperature, until at the critical point at T  =  T c  = 373.946 ° C and p  =  p c  = 22.064 MPa the difference has completely disappeared and only a single phase still exists. When the critical point is approached, the heat of evaporation disappears, and strong density fluctuations occur, recognizable as critical opalescence .

The physical laws governing vapor pressure and evaporation (vapor pressure curve, Clausius-Clapeyron equation, etc.) were first investigated and formulated in connection with the steam engine . Here, too, there is a coexistence of liquid and gas. The steam engine made use of the fact that the steam pressure is independent of the volume as long as one moves in the two-phase system "liquid-gas". The only thing that changes at constant temperature is the “liquid-gas” ratio. The pressure in the tank, which moves the piston, does not change as a result of the piston movement (piston movement, volume change in the cylinder). However, the piston position must not be changed so far that one of the phases would disappear.

The saturation vapor pressure can be calculated , for example, using the Lee-Kesler and Ambrose-Walton methods . Both methods are based on the correspondence principle , in which critical data and the acentric factor are used.

The vapor pressure equations , which use substance-specific parameters adapted to experimental data, such as the Wagner and Antoine equations, meet higher accuracy requirements .

The vapor pressure according to the definition of meteorology, i.e. the partial pressure of a gas within a gas mixture, can be approximately calculated by converting the general gas equation with the following formula:

Since the water vapor partial pressure makes up only a small part of the air pressure , a thermodynamic equilibrium only arises after a very long period of time, which means that substantial undersaturation in the earth's atmosphere is possible without the existing liquid water boiling immediately. For this reason and the high dynamics in the atmosphere, thermodynamically stable states are usually rarely or only briefly encountered, especially in very weather-active zones of the earth's atmosphere. Due to the locally relatively higher vapor pressure above the liquid phase (see above), when water and ice are simultaneously present in a cloud, the ice particles grow at the expense of the water droplets.

The vapor pressure is lower over a non-superheated solid phase than over a liquid phase of the same temperature. If both phases are in contact with one another via the gases surrounding them, the proportion of solid matter increases at the expense of the liquid . This is due to the fact that the stronger binding of the particles in the solid and the resulting heat of fusion in the case of sublimation , i.e. the solid-gaseous phase transition , must also be overcome or applied. The consequence of this is that evaporation or evaporation of particles in the liquid phase occurs more easily and thus more frequently than sublimation of particles above the solid phase. So there are more particles in the gaseous state above the liquid than above the solid, which increases the vapor pressure locally and leads to the growth of the solid phase.