In physical chemistry , thermodynamics , materials science or fluid mechanics, a phase is a spatial area in which the material properties, such as density , refractive index or chemical composition, are homogeneous . The IUPAC defines a phase as the unit of a material system that is uniform in terms of chemical composition and physical state. A phase in the sense of thermodynamics is every homogeneous part of a system. The term was coined by J. W. Gibbs .

As a rule, the term refers to all spatial parts of a system with the same material properties, even if these parts are not related. A pure substance can coexist in different phases, e.g. B. different physical states (solid, liquid and gaseous). A glass of water (liquid phase) can also contain ice cubes (solid phase) at the same time. However, the state of aggregation is not the only differentiating criterion for phases, because many substances can also occur side by side in different modifications (elements) or crystal structures (elements and compounds). The phases of superfluidity represent a special feature, in which the superfluid phase and the normal phase can penetrate each other due to quantum effects , so that the mixture appears to the naked eye as a single phase.

The homogeneity of the phase can be further illustrated using the example of ice in a water glass. So the water in the glass appears as a homogeneous structure. The ice cube is characterized by a different refractive index (you can see the edges under water) and a different density (the ice cube floats on top). In itself, however, it is homogeneous again. Just like the glass, which in itself forms a homogeneous phase.

The term phase is primarily used to distinguish two or more domains of homogeneous composition and properties from one another. This is due to the fact that in thermodynamics typically facts are of interest that are related to the exchange of energy or matter. A substance can change from a solid to a liquid phase when it melts ( phase transition ). Likewise, when salt is dissolved, matter can also pass from the solid salt phase to the liquid, aqueous phase.

A special case of the use of the term occurs with the designation of different aggregate states and modifications of a single-substance system, whereby the phase is mostly used synonymously with these two terms.

This is particularly clear in the case of single-substance systems, since here the phases can only differ in terms of their physical state or their modification. If you are on one of the surfaces in these diagrams, there is only one phase, if you are on a line, there are two phases (e.g. liquid and solid water). In the case of nodes, three (in the case of water, the triple point ) or more phases can be present.

In multi-component systems, the diagrams are correspondingly more complicated, since one z. B. must already take into account three variables in the two-component system. Pure phases (a single-substance phase in addition to other phases) or mixed phases can arise here. The more components are included, the more variants there are for the formation of phases. In general, the maximum possible number of coexisting phases can be calculated using Gibbs' phase rule .

If two or more phases are present next to one another, phase separation occurs and phase boundaries are formed at which the properties and thus the order parameters change abruptly. The phase interfaces between different phases are an exciting area of ​​research, as chemical reactions can take place here, for example, or the properties of the substance change compared to the interior of the phase. See also interfacial tension .

In addition to the stable phases, metastable phases can also exist. These are phases that are not thermodynamically stable, but can still exist for longer periods of time. Examples are diamond under normal conditions or glass.

Difficulty of the concept of homogeneity 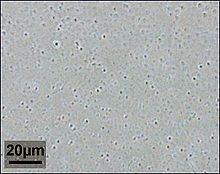 Homogeneity is a difficult term to grasp here: Depending on how closely you look at the substance, it can appear as single-phase or multi-phase:

In addition, inhomogeneities can occur to a certain extent in systems which are by definition homogeneous. For example, minimal differences in concentration and pressure in gases due to gravity ( concentration gradient , pressure of gravity ) are possible, or the composition of crystals is slightly different on their surfaces . In such cases one does not speak of two phases.