The phase diagram illustrates states and their associated phases in dependence on state variables (z. B. Pressure and temperature are). Alternative designations include state diagram , the state chart or equilibrium diagram .

It is a widely used tool in chemistry , physics and especially materials science . Phase diagrams are mostly used for solutions and alloys , but in principle also for any other type of substance or mixture of substances .

Phases are defined much more generally than the three states of aggregation (solid, liquid, gaseous) and therefore their synonyms only in special cases . There are various forms of appearance of phase diagrams, depending on how many substances, phases and variables are being considered. Phase transitions can also occur between different order states within a physical state .

A pT diagram for the three different aggregate states of a pure substance is very well suited to explain the scheme on which the phase diagrams are based. The diagrams contain some curves that delimit the areas of different phases, or here also states of aggregation. These curves, which are referred to as phase boundary lines , represent the mixed regions of these phases. Under the conditions given by them, several phases are in thermodynamic equilibrium . These areas are mathematically described by the Clapeyron equation and its modifications, especially the Clausius-Clapeyron equation for the phase transition condensed / gaseous. The lines are called the boiling point curve (between triple point and critical point , liquid / gaseous phase boundary), sublimation pressure curve (between zero point and triple point, solid / gaseous phase boundary), and melting pressure curve (solid / liquid phase boundary). Boiling point and sublimation pressure curves can also be combined to form the vapor pressure curve . According to Gibbs' phase rule, the critical point and the triple point have no degree of freedom , all lines have one degree of freedom (temperature or pressure) and there are two degrees of freedom (temperature and pressure) within the phase spaces.

The phase transitions of the water are of particular importance for the understanding of the dynamics within the atmosphere and thus of the weather in particular the humidity and the related cloud formation. It is therefore one of the most widely used phase diagrams, shown on the right in the lower phase diagram. It also has an important property that can only be observed in a minority of substances: the anomaly of water indicates that in the phase diagram the melting pressure curve leads from the triple point to lower temperatures with increasing pressure. It results from the physical properties of the water molecules and the resulting hydrogen bonds and is shown phenomenologically in the fact that ice has a lower density than water and can therefore float on it.

In the case of an ideal mix, the miscibility gap always has a lens shape. Characteristics of ideal behavior are the absence of a change in volume or temperature during the mixing process. The mixing diagram (melting diagram) of forsterite ( ) and fayalite ( ) is an example of this, describing the composition of olivine .

On the left edge of such a diagram, the first component (A) is available as a pure substance, and consequently the second component (B) also on the right edge, which is why an approximately vertical limit ( segregation line) is drawn here to make it clear that the The abscissa is limited on both sides. The resulting curves, which meet at one point at the left and right edge, consequently describe the dependence of the phase transition temperatures on the composition of the mixed phase, with the edge points representing the respective transition temperature of the pure substances. In the case of pure substances, the transition temperatures are by definition independent of the direction of the phase change, which explains the outer points. However, if the substances occur in a mixture, the transition values ​​differ, depending on whether the substance evaporates or condenses or solidifies or melts. Since all three states of aggregation only form a common equilibrium at the triple point, a distinction is made between the Tx diagrams according to the two states of aggregation occurring, whereby the solid-gaseous transition is not listed here due to its low relevance.

It should be noted that, without a temperature change, a dynamic equilibrium is established after a certain time (which in geology can be several million years) . The phase change processes balance each other out, but in principle still exist. This is particularly impressive with mixed crystals , which, when immersed in a miscibility gap, very slowly form different phases, which is known as segregation . 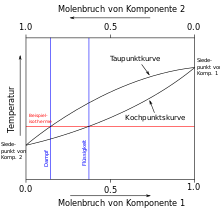 Example of a Tx diagram with a boiling lens

In contrast to the melting diagram, the upper line in the boiling diagram shows the condensation curve (also known as the dew line), while the lower line shows the boiling line. Consequently, the upper phase is gaseous and the lower phase is liquid. Everything else is analogous to the melting diagram. The temperature-molar fraction (Tx) or pressure-molar fraction diagrams (px diagrams) are used, for example, in the design and calculation of a distillation .

Since real mixtures often behave differently than ideal mixtures, the phase diagrams can deviate from the idealized picture almost at will. Phase diagrams of eutectic compositions have a eutectic point . An example of this is the binary system of the minerals diopside - anorthite . Other terms belonging to the area are peritectic , dystectic and monotectic .

Unlimited miscibility gaps downwards (convex isobars) or less often upwards (concave isobars), the maxima and minima of which are referred to as the upper and lower critical separation points, are particularly common. An example of this is a mixture of phenol and water. One method for determining the composition of the individual phases of a two-component system is provided by the Konoden rule .

Ternary diagram Au - Bi - Te . The dominant bismuth and the large gap between maldonite and gold are clearly recognizable .

A system with three components is called a ternary system . Since these components are independent of each other, the composition of such a system is shown in an equilateral triangle, with each corner representing 100% of a particular component. Usage list is z. B. the representation of the composition of the earth's mantle in the system orthopyroxene , clinopyroxene and olivine .

As an example, an excerpt from the ternary system Au-Bi-Te can be seen. Such a ternary phase diagram can be imagined as three binary phase diagrams glued together at the end links, so here the diagrams of the systems Au-Bi, Bi-Te and Te-Au are connected in such a way that the corners of the end links Au-Au, Bi -Bi and Te-Te result. In order to display this 3D diagram correctly in 2D, it is viewed from above so that an equilateral triangle results. Usually the isolines and solidus are shown in different colors, here gray (isotherms) and red (solidus). The red arrows indicate the "topography" of the solidus.

Videos on boiling and melting diagrams: