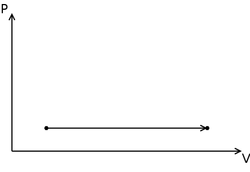 Isobaric change of state in the pV diagram

The isobaric change of state is a term used in thermodynamics . It describes a change in state during which the pressure in the system remains constant. According to Gay-Lussac's law or the equation of state of an ideal gas :

It also follows from this that the volumes behave like the corresponding absolute temperatures :

According to the first law of thermodynamics ( ), the following relationships result for the work :

Here p denotes the pressure , n the amount of substance (in mol ) and R the general gas constant .

In order to heat a gas to a certain temperature under isobaric conditions, a larger amount of heat has to be supplied than with isochoric heating, since part of the supplied heat has to be applied for the expansion of the gas.