In the general sense, a system is in equilibrium if it does not change over time without external influence. In the case of dynamic equilibria , only macroscopic changes are generally considered. In a thermodynamic equilibrium , for example, the macrostate of a gas with the state variables pressure , temperature and chemical potential is constant, while the microstate , i.e. the position and speed of individual gas particles, can change.

The state that the system does not leave without external influence is generally called the state of equilibrium , critical point , fixed point , stationary state , equilibrium position . Depending on the context, the terms mentioned are not used synonymously, but contain an additional classification of the state, for example with regard to stability. When considering open systems , an unchanging state is referred to as a “steady state”, while the term “equilibrium” is used for a stationary state after the system has been isolated .

First, a closed dynamic system is considered . The state of a dynamic system at the point in time can generally be described by a tuple, i.e. an ordered set of all state variables. In order for the state to be a state of equilibrium, it must be the same for all times, one also says "invariant to a dynamic ".

Example of a one-dimensional system. The x -axis is the state space; the black arrows show the evolution of time. The two zeros of the function f are the equilibrium states x 1 and x 2 . The function f can be a potential of the negative gradient e represent.

since then the time derivative is accordingly . A state of equilibrium is therefore a time-independent solution of the ordinary differential equation or a zero of the function .

Convergence to a steady state in a discrete-time macroeconomic stock-flow consistent model .

A discrete dynamic system, which only allows discrete time steps, can be represented by an iterated mapping

The equilibrium point is therefore a time-independent fixed point in the mapping .

State of equilibrium and potential

In mechanics, the location with the coordinates of the equilibrium is also called the position of rest or static position of rest . In particular, a particle does not experience any force in the rest position. “Rest position” is somewhat misleading in this respect: Although there is no force acting on a particle in the rest position, the particle does not have to be at rest there. Only in a static state in which the equilibrium condition is also fulfilled for the impulses is the particle there at rest and the system in equilibrium.

Behavior of equilibria in the event of disturbances

The development of a dynamic system over time can be estimated qualitatively by characterizing the states of equilibrium. A state of equilibrium can be roughly divided into

There are several stability terms in stability theory for the mathematically exact classification . In the following a continuous system is assumed; similar terms can also be defined for systems with discrete time steps.

Lyapunov stable
An equilibrium state is Lyapunov stable if a sufficiently small error condition will remain small or precise: For each there is a such that for all times and all trajectories with the following applies: .

One method of stability analysis is to linearize the system around the state of equilibrium . With the Hartman-Grobman theorem , the equilibrium state can then be characterized using the eigenvalues ​​of the Jacobi matrix .

Thermal equilibrium in a house

describe. The constant is calculated from the area , the heat transfer coefficient of the house walls and the heat capacity of the air. The function on the right side of the equation determines the dynamics of the system. For a state of equilibrium ,

The system has a state of equilibrium at . Because the derivative

is negative, the equilibrium state is stable. If the house is warmer or colder than the surroundings, it cools or warms up until it reaches this state of equilibrium. In this way, by determining the equilibrium points and their stability, statements about the behavior of the system can be made without having to explicitly calculate the temperature curve over time . The integration of the equation, which would be necessary for this explicit calculation, is generally not easy or not analytically possible in non-linear systems.

Mechanical equilibrium in a plane pendulum

A level pendulum as a ride at a fair 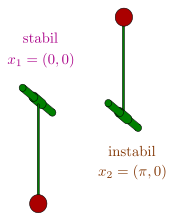 Equilibrium positions of the plane pendulum.

Phase space of the plane pendulum with constants = 1. The potential and the phase space are periodic with period 2π with respect to the angle θ.

A plane pendulum is a mechanical system in which a mass is rotatably attached to a point with a pendulum rod of fixed length . The state of such a pendulum at a fixed point in time can be described by an angle and the angular velocity . The equation of motion is then the autonomous differential equation

where the constant is the gravitational acceleration .

Ecological balance in a predator-prey relationship

Phase space of the Lotka-Volterra system with constants = 1

A simple model of the interaction between predator and prey populations is the Lotka-Volterra equations . They describe the development over time of a number of prey animals and predators . With the respective reproduction and death rates or and or , the differential equation system results for a state :

A system in nature can generally be described in different ways. There are differently detailed possibilities to choose the state variables of the system. In statistical physics, the terms macrostate and microstate are used to differentiate between differently detailed descriptions . In the case of equilibrium considerations, such as a thermodynamic equilibrium, only the macrostate is considered. The system is in equilibrium if the macrostate does not change. However, the microstate of the system can change.

If there are processes within the system or flows across the system boundaries that change the microstate, cancel each other out in their influence on the macrostate of the system, an equilibrium is called dynamic equilibrium or steady state .

Dynamic equilibrium in a closed system

In the case of non-open systems, it is only internal processes that influence the state variables of the system. The equilibrium condition formulated above is fulfilled in systems of chemical reactions exactly when the chemical potentials are balanced. Example: A thermally insulated pressure pot with hot water and steam. The two reactions involved are evaporation and condensation. Evaporation lowers the temperature and increases the pressure, which slows down further evaporation or accelerates condensation. After some time, an equilibrium is established in which both reactions proceed at the same speed and the state variables pressure, temperature and amount of steam remain constant.

For systems in dynamic equilibrium, the virial theorem applies in the respective sub-area of ​​physics. Explicit knowledge of orbits is not required for this.

In general, there are more than two reactions that happen at the same time. The equilibrium can then exist between all participating elements of the system or it can be limited to a subsystem. If the processes of the subsystem are fast compared to exchange processes with the environment, then quasi-static changes of state occur. Example: The slowly cooling pressure pot. The release of heat to the environment lowers the temperature, the pressure and the amount of steam, but not independently of one another, rather the system state always remains close to the steam pressure curve .

Whether there is a separation into fast and slow processes in a special case and how the changes in the state variables occur over time is the subject of kinetics .

If there are several coupling processes with the environment, the state of the system can remain constant in that they cancel each other out more or less randomly. Dynamic equilibria are always associated with the production of entropy , which must be removed for a steady state.

If a coupling process dominates the other processes, the state of the subsystem is defined in the affected state variable. Examples: The pot is open, the pressure is set to atmospheric pressure, even high heating power does not raise the temperature above the boiling point as long as there is still water in the pot. In electrical engineering, the voltage is fixed ( clamped ) when a small consumer is connected to a voltage source . An economic example is fixed book prices (for works without an alternative, such as special books).

Flow equilibrium in the reaction-free system

Without close coupling, systems will usually react to changes in the environment with significant changes in their state. The term steady state suggests the following example: The level of a tub without stopper is located at a given inflow as level adjustment that the level is dependent on the outflow is equal to the inflow. But there are also constant equilibria with many other physical and non-physical quantities, such as energy or wealth.

The flows across the system boundary can also be balanced out by the system influencing them through internal control processes. The system theory generally calls the subsystem of a complex system that forms the control mechanism homeostat , the prototypical example is the thermostat .

The term homeostasis was coined in connection with living systems in which many system parameters are usually subject to regulation: pH value, osmotic pressure, enzyme concentrations, temperature, number of cells - to name just a few.