An equation of motion is understood to be a mathematical equation (or a system of equations ) that fully describes the spatial and temporal development of a mechanical system under the influence of external influences. As a rule, these are systems of differential equations of the second order.

These differential equations cannot be solved analytically for many systems , so that suitable approximation methods must be used for the solution .

To set up equations of motion in classical physics

used. Based on this, the equation of motion of quantum mechanics results, the Schrödinger equation .

In engineering mechanics are

The solution to the equation of motion is the trajectory on which the system moves. Apart from a few simple cases (see examples below), it cannot usually be represented in an analytically closed form and must be obtained using numerical methods . This is e.g. B. to determine the trajectories of three celestial bodies, which attract each other gravitationally , required (see three-body problem ). The discrete element method can be used to solve an N-particle system. In simple cases, the closed solution is called the "path equation".

For example, a general form of the equation of motion in classical physics is

On the left side the inertia term stands for the particle of mass , on the right side all forces acting on the particle are added up.

Equation of motion of a force-free mass particle

The equation of motion in this case is

The path is obtained by integrating the differential equation twice :

with the integration constants:

The particle moves in a straight line with constant speed. The mass does not matter.

Let a body of mass be exposed to gravity :

The orbital equation is

and represents the ballistic parabolic throw. For one gets the free fall . In the case of gravity, the mass of the body does not matter.

Equation of motion of the special theory of relativity

In the special theory of relativity , the four-force is defined as the derivative of the relativistic momentum p according to proper time , with

where the relationship between proper time and time t

applies and denotes the Lorentz factor .

From this equation of motion it follows that although there is a linear relationship between the classic quantities of spatial force and acceleration , there is no longer a simple proportionality: for parts parallel to the direction of movement, on the other hand, for perpendicular parts .

Equation of motion of general relativity

where a Christoffel symbol is 2nd kind, which shows the dependence of the metric tensor on the space-time point (event), d. H. the curvature of space-time.

Equation of motion in structural dynamics

In structural dynamics, the equation of motion of a dynamically loaded structure is the basis of the calculation:

Where is the load vector of the system. and are the mass, damping and stiffness matrices of the structure. The vector contains the displacement quantities. The matrix preparation according to the degree of freedom of a structure is very well suited for a computer calculation, for example according to the finite element method . 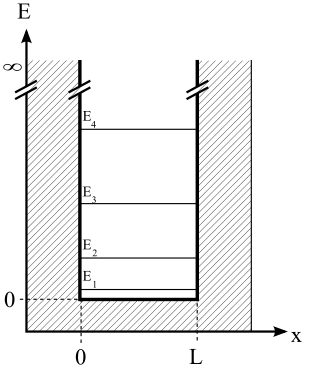 The energy eigenvalues and the corresponding eigenfunctions , are: