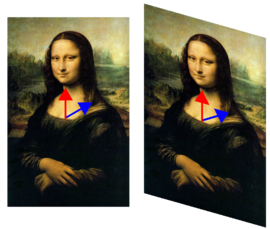 In this Mona Lisa shear , the image was deformed in such a way that the red arrow (vector) did not change its direction (along the vertical axis), but the blue arrow did. The red vector is an eigenvector of the shear mapping , while the blue vector is not due to its change of direction. Since the red vector is not scaled, its associated eigenvalue is 1.

In linear algebra, an eigenvector of a mapping is a vector different from the zero vector , the direction of which is not changed by the mapping. An eigenvector is only scaled and the scaling factor is called the eigenvalue of the mapping.

Eigenvalues ​​characterize essential properties of linear mappings , for example whether a corresponding linear system of equations can be uniquely solved or not. In many applications, eigenvalues ​​also describe physical properties of a mathematical model . The use of the prefix “Eigen-” for characteristic quantities in this sense can be traced back to a publication by David Hilbert from 1904 and is also used as Germanism in several other languages, including English .

The mathematical problem described in the following is called a special eigenvalue problem and relates only to linear mappings of a finite-dimensional vector space in itself ( endomorphisms ), as represented by square matrices .

The question arises under which conditions a matrix is similar to a diagonal matrix .

If a vector space is over a body (in applications mostly the body of real numbers or the body of complex numbers ) and a linear mapping of itself ( endomorphism ), then an eigenvector is a vector that passes through to a multiple of itself is shown with :

The factor is then called the associated eigenvalue.

In other words: Has the equation for one

If the vector space has a finite dimension , every endomorphism can be described by a square matrix . The above equation can then be used as a matrix equation

write, where here denotes a column vector. In this case one calls a solution the eigenvector and eigenvalue of the matrix

This equation can also be written in the form

write, denoting the identity matrix , and equivalent to

Calculation of the eigenvalues

With small matrices the eigenvalues ​​can be calculated symbolically (exactly). For large matrices this is often not possible, so here methods of numerical analysis are used.

defines the eigenvalues ​​and represents a homogeneous linear system of equations .
Since it is assumed, this can be solved exactly if

applies. This determinant is called the “ characteristic polynomial ”. It is a normalized polynomial -th degree in its zeros , i.e. the solutions of the equation

A generalization of the eigenspace is the main space .

applies. The greatest amount of all eigenvalues ​​is called the spectral radius .

If it applies to an eigenvalue that its algebraic multiplicity is equal to its geometric multiplicity , then one speaks of a semi-simple eigenvalue (from the English 'semisimple'). This corresponds exactly to the diagonalisability of the block matrix for the given eigenvalue.

If one knows the eigenvalues ​​as well as their algebraic and geometric multiples (see below), one can create the Jordan normal form of the matrix.

Let it be the square matrix

given. Subtracting the unit matrix multiplied by gives:

Calculating the determinant of this matrix (using Sarrus' rule ) yields:

The eigenvalues ​​are the zeros of this polynomial, we get:

The eigenvalue 2 has algebraic multiplicity 2 because it is the double zero of the characteristic polynomial.

While the exact calculation of the zeros of the characteristic polynomial is not so easy for three-row matrices, it is usually impossible for large matrices, so that one then restricts oneself to determining approximate values. For this purpose, methods are preferred that are characterized by numerical stability and low computational effort. These include methods for densely populated small to medium-sized matrices, such as

There are also methods of estimation, e.g. B. using

which always allow a rough estimate (under certain conditions even precise determination).

Calculation of the eigenvectors

For an eigenvalue , the eigenvectors can be derived from the equation

The geometric multiplicity of an eigenvalue can also be defined as the maximum number of linearly independent eigenvectors for this eigenvalue.

As in the example above, the square matrix is ​​given

So you have to solve the following system of linear equations:

If you bring the matrix to an upper triangular shape , you get:

The procedure for the eigenvalue is the same:

Again, the matrix is ​​triangular:

Here the solution is the vector again with all its multiples different from the zero vector.

where with multiple eigenvalues ​​the multiplicity has to be considered. Here denotes the trace of the matrix .

For commutating diagonalizable (especially symmetric) matrices it is possible to find a system of common eigenvectors:

If two matrices commutate and (also holds ) and is a nondegenerate eigenvalue (i.e. the associated eigenspace is one-dimensional) of with eigenvector then holds

Left eigenvectors can be found e.g. B. in stochastics when calculating stationary distributions of Markov chains using a transition matrix .

examine. This generalized eigenvalue problem is not considered further here.

Be open Then the derivative operator has a non-empty point spectrum. If you look at the equation for all of them

and then one sees that the equation is true for all . So each is an eigenvalue with an associated eigenfunction

By solving an eigenvalue problem one calculates

Eigenvalues ​​play a special role in quantum mechanics . Physical quantities such as B. the angular momentum are represented here by operators . Only the eigenvalues ​​of the operators can be measured. Has z. B. the Hamilton operator , which represents the energy of a quantum mechanical system, a discrete spectrum , the energy can only assume discrete values , which z. B. is typical of the energy levels in an atom . In the solutions of the well-known Schrödinger equation (established in 1926 by the physicist Erwin Schrödinger ), the eigenvalues ​​represent the allowable energy values ​​of the electrons and the eigenfunctions represent the associated wave functions of the electrons.

The impossibility of simultaneous precise measurement of certain quantities (e.g. of position and momentum), as expressed by Heisenberg's uncertainty principle , is ultimately due to the fact that there is no common system of eigenvectors for the respective operators.