Schrödinger is a redirect to this article. Further meanings are listed under Schrödinger (disambiguation) . 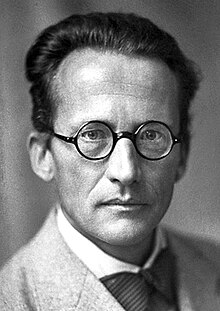 Schrödinger is considered one of the founders of quantum mechanics and received the Nobel Prize in Physics together with Paul Dirac in 1933 for the discovery of new productive forms of atomic theory .

Erwin Schrödinger's father Rudolf Schrödinger (1857–1919) was an oilcloth manufacturer and botanist . His mother Georgine Emilia Brenda (1867–1921) was the daughter of Alexander Bauer , professor of general chemistry at the Imperial and Royal Technical University in Vienna. His father was Catholic, his mother Evangelical Lutheran. The children were brought up in the Protestant denomination .

Schrödinger went to the academic high school in 1898 . He then studied mathematics and physics in Vienna from 1906 to 1910 and received his doctorate under Franz Serafin Exner in 1910 and qualified as a professor at the Vienna Physics Institute in 1914. There he worked with Franz-Serafin Exner, Friedrich Hasenöhrl and KWF Kohlrausch , among others . During his studies he was close friends with the botanist Franz Frimmel .

After participating in the First World War , he was appointed to Jena (1920), Stuttgart (1920), Breslau (1921) and Zurich (1922). In Zurich he represented the chair for theoretical physics , which Albert Einstein and Max von Laue had held before him . Here he also formulated the Schrödinger equation named after him , which he discovered at the end of 1925 during a holiday in Arosa . With this he founded wave mechanics as a description of quantum mechanics .

In 1927 Schrödinger went to Berlin , where he succeeded Max Planck at the Friedrich Wilhelms University . Numerous world-class physicists gathered in Berlin during those years. There he worked a. a. together with Victor Weisskopf . After the seizure of power of the Nazis in 1933, Schrödinger decided who had brought earlier in remarkable clarity his rejection of Nazism expressed to leave Germany and a place at Magdalen College in Oxford to accept. In the same year he was awarded the Nobel Prize in Physics.

In 1936 he returned to Austria to accept an appointment at the Karl Franzens University in Graz . His behavior during the Anschluss in 1938 is contradictory: Although he had already emerged as a Nazi opponent in Berlin, he initially assumed that he would be able to keep his Graz professorship and published an article on March 31, 1938 in the “Grazer Tagespost” with the Title The hand of everyone willing. Commitment to the Führer - an outstanding scientist reports to serve the people and homeland . Schrödinger, who apparently felt safe, spent the summer holidays of 1938 in the Dolomites , where he met Max Planck, among others. In a note from the new National Socialist university management, Schrödinger was described as “technically excellent”, “contradicting personal behavior” and politically “semitophile”; his professorship was re-advertised by the Ministry during the 1938 vacation without the knowledge of the responsible dean Karl Polheim . On August 26, he was finally released for "political unreliability" and traveled to Rome on September 14, 1938 by train.

Schrödinger went to Dublin , where he worked from 1940 and was director of the school for theoretical physics of the Dublin Institute for Advanced Studies . In 1943 he gave his famous "Schrödinger lectures" at Trinity College there . In 1949 he became a corresponding member of the Bavarian Academy of Sciences and an external member of the Royal Society . 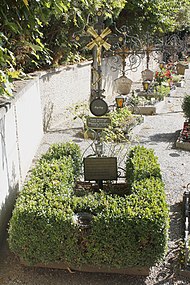 In 1956 he returned to Vienna. Here he taught at the Institute for Theoretical Physics at the University of Vienna until his death . Schrödinger also took part in the university days in Alpbach . Since he liked the place, he spent his last years here. His daughter Ruth Braunizer lived in the Tyrolean village until her death in 2018. Erwin Schrödinger died of tuberculosis on January 4, 1961 in Vienna . According to his wishes, he was buried in Alpbach in Tyrol . The grave cross is inscribed with the equation that bears his name.

On April 6, 1920 he married Annemarie Bertel, called Annie. The marriage remained childless. Schrödinger and his wife Annie lived in an open relationship - Schrödinger had open extramarital relationships, for example with the wife of his colleague and friend Arthur March , and Annie had a long-term relationship with Hermann Weyl , which did not disturb the friendship between Weyl and Schrödinger. He had a daughter with Hildegunde March (Ruth Braunizer, 1934-2018); both lived with Schrödinger in Dublin from 1939 to 1945.

1926 formulated Schrödinger named after him Schrödinger equation . The access to quantum mechanics that Schrödinger found with the help of this partial differential equation came a little later than Heisenberg's matrix mechanics, but has the advantage that he uses the mathematics known from classical mechanics. This work brought him world fame and eventually the Nobel Prize in Physics in 1933. In this famous series of articles (Annalen der Physik Vol. 79, p. 361, 489, 734, and Vol. 81, p. 109, 1926) he also immediately proved the equivalence of his formulation with the matrix mechanics of Heisenberg and Born .

The examination of the work of Ernst Mach led him to occupy himself with the theory of color perception. He soon became a recognized expert in this field . He also examined color spaces with special metrics and thus gave important theoretical suggestions, for example in the development of the later XYZ color space of the CIE . The additive color mixing follows the rules of vector addition, which is why Schrödinger introduced vector representation in color measurement.

Schrödinger also commented on philosophical aspects of quantum mechanics. In his 1944 work Was ist Leben? (in the original What is Life? ) he introduces the concept of negentropy . She had a major impact on scientists like Maurice Wilkins , Francis Crick, and James D. Watson in developing molecular biology at the time, trying to explain biological issues physically and drawing attention to the then-unknown mechanism of inheritance for which he developed the Coined the term “aperiodic crystal”, which he imagined as a protein at the time of publication. At that time he was relatively isolated in Dublin and did not know the early research of Oswald Avery, for example, on the role of DNA and Max Delbrück on bacteriophages in the USA, but his book, which is also stylistically outstanding, asked the right questions in the retrospective of Freeman Dyson at the right time .

His best-known thought experiment is Schrödinger's cat , with which he transferred the counterintuitive effects of quantum mechanics to objects in everyday life and thus wanted to express his rejection of the usual statistical interpretation of quantum mechanics.

He also published 50 other publications on various topics. In the last years of his life he dealt intensively with generalizations of the general theory of relativity (" unified field theories "), about which he also corresponded with Albert Einstein - but the relationship cooled when Schrödinger expressed his enthusiasm for his theory in exaggerated press releases.

In 1950 Schrödinger was elected to the American Academy of Arts and Sciences . In 1956 he was accepted into the order Pour le Mérite and was the first winner of the Erwin Schrödinger Prize of the Austrian Academy of Sciences, named after him .

In 1920 Erwin Schrödinger was awarded the Haitinger Prize of the Academy of Sciences in Vienna . In 1957 he received the Austrian Decoration of Honor for Science and Art from the Republic of Austria . In 1937 he was awarded the Max Planck Medal .

Schrödinger as the namesake

Erwin Schrödinger on the 1000 Schilling banknote from 1983